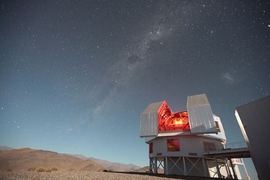 ↓ Download Image
Caption: The Magellan Telescopes at Las Campanas Observatory, Chile, where some of the new research on the Segue 1 galaxy was conducted.
Credits: Photo: Anna Frebel 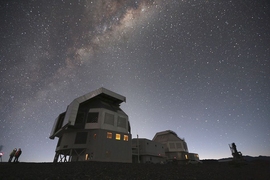 ↓ Download Image
Caption: The Magellan Telescopes at Las Campanas Observatory, Chile, where some of the new research on the Segue 1 galaxy was conducted.
Credits: Photo: Anna Frebel

Caption:
The Magellan Telescopes at Las Campanas Observatory, Chile, where some of the new research on the Segue 1 galaxy was conducted.
Credits:
Photo: Anna Frebel

Located some 75,000 light years from us, a galaxy known as Segue 1 has some unusual properties: It is the faintest galaxy ever detected. It is very small, containing only about 1,000 stars. And it has a rare chemical composition, with vanishingly small amounts of metallic elements present.

Now a team of scientists, including an MIT astronomer, has analyzed that chemical composition and come away with new insights into the evolution of galaxies in the early stages of our universe — or, in this case, into a striking lack of evolution in Segue 1. Commonly, stars form from gas clouds and then burn up as supernova explosions after about a billion years, spewing more of the elements that are the basis for a new generation of star formation.

Not Segue 1: In contrast to all other galaxies, as the new analysis shows, it appears that Segue 1’s process of star formation halted at what would normally be an early stage of a galaxy’s development.

“It’s chemically quite primitive,” says Anna Frebel, an assistant professor of physics at MIT, and the lead author of a new paper detailing the new findings about Segue 1. “This indicates the galaxy never made that many stars in the first place. It is really wimpy. This galaxy tried to become a big galaxy, but it failed.”

But precisely because it has stayed in the same state, Segue 1 offers valuable information about the conditions of the universe in its early phases after the Big Bang.

“It tells us how galaxies get started,” Frebel says. “It’s really adding another dimension to stellar archaeology, where we look back in time to study the era of the first star and first galaxy formation.”

The paper, “Segue 1: An Unevolved Fossil Galaxy from the Early Universe,” has just been published by Astrophysical Journal. Along with Frebel, the co-authors of the paper are Joshua D. Simon, an astronomer with the Observatories of the Carnegie Institution, in Pasadena, Calif., and Evan N. Kirby, an astronomer at the University of California at Irvine.

The analysis uses new data taken by the Magellan telescopes in Chile, as well as data from the Keck Observatory in Hawaii, pertaining to six red giant stars in Segue 1, the brightest ones in that galaxy. The astronomers are able to determine which elements are present in the stars because each element has a unique signature that becomes detectable in the telescope data.

In particular, Segue 1 has stars that are distinctively poor in metal content. All of the elements in Segue 1 that are heavier than helium appear to have derived either from just one supernova explosion, or perhaps a few such explosions, which occurred relatively soon after the galaxy’s formation. Then Segue 1 effectively shut down, in evolutionary terms, because it lost its gas due to the explosions, and stopped making new stars.

“It just didn’t have enough gas, and couldn’t collect enough gas to grow bigger and make stars, and as a consequence of that, make more of the heavy elements,” Frebel says. Indeed, a run-of-the-mill galaxy will often contain 1 million stars; Segue 1 contains only about 1,000.

The astronomers also found telling evidence in the lack of so-called “neutron-capture elements” — those found in the bottom half of the periodic table, which are created in intermediate-mass stars. But in Segue 1, Frebel notes, “The neutron-capture elements in this galaxy are the lowest levels ever found.” This, again, indicates a lack of repeated star formation.

Indeed, Segue 1’s static chemical makeup even sets it apart from other small galaxies that astronomers have found and analyzed.

“It is very different than these other regular dwarf-type galaxies that had full chemical evolution,” Frebel says. “Those are just mini-galaxies, whereas [Segue 1 is] truncated. It doesn’t show much evolution and just sits there.”

Dwarf galaxies, astronomical modeling has found, appear to form building blocks for larger galaxies such as the Milky Way. The chemical analysis of Segue 1 sheds new light on the nature of those building blocks, as Frebel notes.

Indeed, other astronomers suggest that the study of galaxies such as Segue 1 is a vital part of progress in the field. Volker Bromm, a professor of astronomy at the University of Texas, says the new paper is “very nice and important,” and “substantiates the idea” that analyzing faint dwarf galaxies produces new insight into the universe’s development.

As Bromm points out, when it comes to the chemical composition of early stars, any search for clues among stars closer to us in the Milky Way can be problematic; most such stars have had “a very complex assembly and enrichment history, where many generations of supernovae contributed to the abundance patterns [of elements] seen in those stars.” Dwarf galaxy stars do not come with that problem.

The findings on Segue 1 also indicate that there may be a greater diversity of evolutionary pathways among galaxies in the early universe than had been thought. However, because it is only one example, Frebel is reluctant to make broad assertions.

“We would really need to find more of these systems,” she notes. “Or, if we never find another one [like Segue 1], it would tell us how rare it is that galaxies fail in their evolution. We just don’t know at this stage because this is the first of its kind.”

Frebel’s work often focuses on analyzing the chemical composition of unusual stars closer to us. However, she says she would like to continue this kind of analysis for any other galaxies like Segue 1 that astronomers may find. That process could take a while; she acknowledges that any such future discoveries will require “patience, and a little luck.”