An ally for the understudied Y chromosome 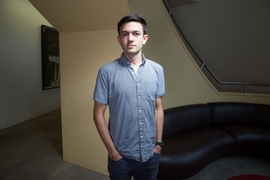 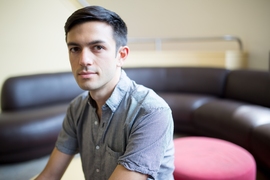 Alexander Godfrey, a PhD student in biology at MIT, is acutely fascinated by the Y chromosome, which confers maleness. This chromosome is often considered a genetic castaway — because its complexity makes it very difficult to study — but Godfrey is undeterred. Four years into his degree, he continues to push forward, attempting to get to know a chromosome that 50 percent of the population has, but few understand.

Although the Y chromosome is typically cast as merely a developmental on-switch for maleness, with few other genetic roles, Godfrey’s research may contribute to an understanding of it as a contributor to differences between men and women throughout the body and lifetime.

As an undergraduate at Princeton University, Godfrey initially pursued engineering — a path that his high school teachers encouraged him to take. But he quickly realized he was more interested in qualitative understanding, and switched to molecular biology, focusing the bulk of his scientific attention on bacteria research.

Beyond meeting the core requirements of his major in molecular biology, Godfrey turned much of his academic attention to the study of religion. “I’ve always found it very compelling that every individual can have such a different experience with religion,” Godfrey says. In fact, this very outlook led him to concentrate on genetics within MIT’s biology program. “The reason I find human genetics so interesting is that it’s the study of how minute changes in our DNA can lead to all of the incredible differences that we observe in people,” he says. “Diversity is encoded in our DNA.”

At MIT, Godfrey works in the lab of David Page, a professor of biology and director of the Whitehead Institute. After working with bacteria as an undergrad, he considered following a similar path in graduate school: Bacteria are small and easy to culture and restock, making them good targets for rigorous experimentation. But after hearing Page give a presentation on the Y chromosome’s underdog status in genetic research, Godfrey was hooked.

Composed of repeating DNA patterns, the Y chromosome is especially difficult to study. DNA is usually understood by breaking it up into pieces, and figuring out how active certain genes are by locating where the pieces came from — so if all of the pieces look the same, or very similar, the process becomes nearly impossible. Godfrey likens it to a puzzle full of pieces that are nearly indistinguishable: Putting the puzzle together, and seeing the big picture, is extremely difficult.

Determined to contribute to an understudied field, he has delved into answering an enormous question: How do genes in the Y chromosome that are active throughout the body lead to differences between men and women?

Sometimes, Godfrey concedes, it’s almost too big of a question. So his research, for now, focuses merely on nailing down exactly where in the body Y chromosome genes are turned on, in order to create a sort of a map of Y chromosome activity.

He’s relying on a publicly available dataset that describes the patterns of gene activity in hundreds of postmortem human donors. The dataset specifically shows what parts of the genomes are active in 30 different organs, but no one else is using the data to study Y chromosome gene activation, leaving Godfrey with a goldmine of information to weed through.

“With genetics, a lot of people are now studying very minute things, like how a single DNA base can lead to disease, but I’m doing the opposite,” he says. “There’s a huge genetic difference between men and women, and yet no one fully understands it. It’s been hidden in plain sight.”

Godfrey’s hopes for this kind of research are years, possibly decades, beyond the current knowledge base. He started off testing specific genes to find out what they might be coding for, but the topic was too narrow for a newborn field.

While keeping tabs on the scope of his research can be tough when there are so many unanswered questions Godfrey would like to chase after, it also offers reassurance.

“It’s easy to lose track of how simple of an insight would really be such a big contribution to this field,” he says.

Ironically, after turning away from engineering to focus on something more qualitative, Godfrey has now been focused on quantitative research for the last three years. Sifting through mounds of data to find nuggets of useful information requires a lot of mathematical and computational work. He’s found, though, that using these approaches to answer a question that holds meaning for him is actually quite compelling.

With approximately two years left in his graduate work, he’s not sure where his path will lead — most likely academia, he says — but for now he’s busy maintaining perspective.

“We really know so little [about the Y chromosome], so my observations don’t have to be complicated,” Godfrey says. “They can actually be quite powerful when they’re simple.”

It’s in the genes — but whose?