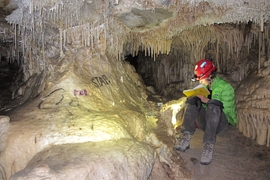 All around the deserts of Utah, Nevada, southern Oregon, and eastern California, ancient shorelines line the hillsides above dry valley floors, like bathtub rings — remnants of the lakes once found throughout the region. Even as the ice sheets retreated at the end of the last ice age, 12,000 years ago, the region remained much wetter than it is today. The earliest settlers of the region are likely to have encountered a verdant landscape of springs and wetlands.

So just when and why did today’s desert West dry out?

Researchers from MIT and elsewhere have now determined that the western U.S. — a region including Nevada, Utah, Oregon, and parts of California — was a rather damp setting until approximately 8,200 years ago, when the region began to dry out, eventually assuming the arid environments we see today.

The team identified this climatic turning point after analyzing stalagmites from a cave in Great Basin National Park in Nevada. Stalagmites are pillars of deposited cave drippings that form over hundreds of thousands of years, as water slowly seeps down through the ground, and into caves. A stalagmite’s layers are essentially a record of a region’s moisture over time.

The researchers used a dating technique to determine the ages of certain layers within two stalagmites, then analyzed these layers for chemical signatures of moisture. They dated stalagmite layers ranging from 4,000 to 16,000 years old, observing that moisture content appears to drop dramatically in samples that are less than 8,200 years old.

David McGee, the Kerr-McGee Career Development Assistant Professor in MIT’s Department of Earth, Atmospheric and Planetary Sciences, says the results suggest that around 8,200 years ago, the climate of the American West began transitioning from a lush landscape to the desert terrain that we know today. On a geological timescale, McGee says the region’s moisture content appears to have dropped rather suddenly — “like falling off a shelf,” he says. This steep drop likely had a dramatic impact on humans living in the region.

“Based upon these data, I would hypothesize that you should see some pretty big changes in how people were living just before and right after 8,000 years ago,” McGee says. “What sort of game were they hunting, what plants were they eating, and where were they choosing to live? Montana’s going to start looking pretty good if the Great Basin is drying out. ”

McGee and graduate students Elena Steponaitis and Alexandra Andrews have published their findings in the journal Quaternary Science Reviews.

Sorting through the stalagmite stacks

McGee and his colleagues concentrated their study on a single cave on the eastern edge of Nevada, known as Lehman Caves, that is part of the Great Basin National Park. A rancher discovered the cave in 1885, and carved a path through its stalagmites, ultimately turning the cave into a tourist attraction. Park rangers have since collected the broken stalagmites, reassembling and storing them in a “library” within the cave.

In 2012, Steponaitis led a group through the cave to look for stalagmites — also known as “speleothems” — that may pinpoint when the western U.S. began to dry out. The researchers formed an assembly line of sorts, methodically labeling and photographing the top and bottom shards of each stalagmite stored in the cave’s library. The group then took these shards into the lab to determine their ages.

To date the shards, the researchers drilled into each stalagmite shard, creating a powder that they then analyzed for isotopes of uranium and thorium. As uranium decays to thorium at a known rate, the ratio of the two isotopes can indicate a layer’s age, or when it first was deposited.

“[Stalagmites] are deposited in layers, kind of like stacked traffic cones,” McGee says. “Each year’s drips make a new coating, and when you cut them open, they have a very clear set of layers, and a clear sense of this is older, this is younger. So they have stratigraphy to them, which is important to us.”

After dating each shard, McGee and Steponaitis singled out two stalagmite samples that were deposited within the last 15,000 years, suggesting these stalagmites were formed toward the end of the last Ice Age. Within each stalagmite, the group dated and marked layers at regular intervals.

Percolating through a cave

To determine the moisture content for each layer, the researchers first examined how water traveled through the cave. They collected drips from various locations throughout the cave, water from standing pools on the cave floor, and soil samples from above the cave.

“I’ve heard stalagmites called ‘fossilized groundwater,’ and that’s essentially what they are,” McGee says. “Groundwater is percolating through the soil and rock, gets to the cave and drips out, and precipitates this stalagmite. The chemistry of that groundwater tells us something about the conditions outside the cave.”

For this particular cave, the researchers observed that the drier the soil above a cave, the slower the percolation of water down into the cave. Water in soil tends to precipitate calcium, leaving more magnesium in the water that reaches the cave. The group analyzed each stalagmite for magnesium, reasoning that the more magnesium found in a particular layer, the drier that period of time was, and vice versa.

Their experiments showed that magnesium levels rose rapidly in layers deposited after roughly 8,200 years ago, indicating that this period experienced a significant drying event. What that event might be is up for debate, although McGee hazards a guess.

“One of the big things that was happening at this time worldwide was the collapse of the last vestiges of this big ice sheet in Canada,” McGee says. “An ice sheet is thought to have important effects on where the jet stream goes. By having this ice sheet here, it made it so the jet stream was more likely to bring storms into the American West, and when it collapsed, the region became more like it is today.”

The team found that lake records from Nevada, Utah, Oregon, and eastern California suggest a similar drying-out period. “Further work will help us figure out exactly what that fingerprint is,” McGee says.

This work was funded in part by the National Science Foundation.