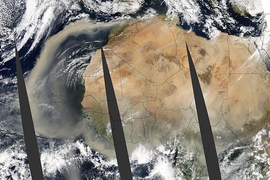 ↓ Download Image
Caption: An immense dust storm over central Africa is seen in images taken during consecutive overpasses of NASA's Aqua satellite. The dust appears thickest to the right of center, in a region known as the Bodele Depression, once the location of a large lake. Now the region is one of the largest sources of wind-blown dust on Earth.
Credits: Image courtesy of Jacques Descloitres/MODIS Rapid Response Team/NASA-Goddard Space Flight Center

Caption:
An immense dust storm over central Africa is seen in images taken during consecutive overpasses of NASA's Aqua satellite. The dust appears thickest to the right of center, in a region known as the Bodele Depression, once the location of a large lake. Now the region is one of the largest sources of wind-blown dust on Earth.
Credits:
Image courtesy of Jacques Descloitres/MODIS Rapid Response Team/NASA-Goddard Space Flight Center
As recently as 5,000 years ago, the Sahara — today a vast desert in northern Africa, spanning more than 3.5 million square miles — was a verdant landscape, with sprawling vegetation and numerous lakes. Ancient cave paintings in the region depict hippos in watering holes, and roving herds of elephants and giraffes — a vibrant contrast with today’s barren, inhospitable terrain.

The Sahara’s “green” era, known as the African Humid Period, likely lasted from 11,000 to 5,000 years ago, and is thought to have ended abruptly, with the region drying back into desert within a span of one to two centuries.

The team traced the region’s wet and dry periods over the past 30,000 years by analyzing sediment samples off the coast of Africa. Such sediments are composed, in part, of dust blown from the continent over thousands of years: The more dust that accumulated in a given period, the drier the continent may have been.

From their measurements, the researchers found that the Sahara emitted five times less dust during the African Humid Period than the region does today. Their results, which suggest a far greater change in Africa’s climate than previously estimated, will be published in Earth and Planetary Science Letters.

David McGee, an assistant professor in MIT’s Department of Earth, Atmospheric and Planetary Sciences, says the quantitative results of the study will help scientists determine the influence of dust emissions on both past and present climate change.

“Our results point to surprisingly large changes in how much dust is coming out of Africa,” says McGee, who did much of the work as a postdoc at Columbia. “This gives us a baseline for looking further back in time, to interpret how big past climate swings were. This [period] was the most recent climate swing in Africa. What was it like before?”

Getting to the core of dust

To trace Africa’s dust emissions through time, McGee analyzed sediment samples collected in 2007 by researchers from Columbia and Woods Hole Oceanographic Institution. Researchers sampled from sites off the northwest coast of Africa, spanning a distance of more than 550 miles.

At each site, they collected a core sample — a 10-foot long cylinder topped by a weight — which scientists submerged, collecting a column of sediment.

McGee says a 10-foot column represents approximately 30,000 years of sediments deposited, layer by layer, in the ocean — sediments like windblown dust from the continent, marine deposits brought in by ocean currents, and leftover bits of organisms that sank to the seafloor. A centimeter of sediment corresponds to about 100 years of deposition, providing what McGee calls a “high-resolution” record of dust changes through time.

Using a technique called thorium-230 normalization, McGee and his colleagues calculated accumulation rates for sediment layers every two to three centimeters along the column. The technique is based on the decay of uranium in seawater: Over time, uranium decays to thorium-230, an insoluble chemical that sticks to any falling sediment as it sinks to the seafloor. The amount of uranium — and by extension, the production rate of thorium-230 — in the world’s oceans is relatively constant. McGee measured the concentration of thorium-230 in each core sample to determine the accumulation rates of sediments through time.

In periods when sediments accumulated quickly, there was a smaller concentration of thorium-230. In slower-accumulating periods, McGee measured a greater thorium-230 concentration.

Once the team calculated rates of sediment accumulation over the past 30,000 years, it went about determining how much of that sediment was dust from neighboring Africa. The researchers subtracted biological sediment from the samples by measuring calcium carbonate, opal and organic carbon, the primary remnants of living organisms. After subtracting this measurement from each sample layer, the researchers tackled the task of separating the remaining sediment into windblown dust and marine sediments — particles that circulate through the ocean, deposited on the seafloor by currents.

This study, McGee says, is the first in which researchers have combined the two techniques — endmember modeling and thorium-230 normalization — a pairing that produced very precise measurements of dust emissions through tens of thousands of years.

In the end, the team found that during some dry periods North Africa emitted more than twice the dust generated today. Through their samples, the researchers found the African Humid Period began and ended very abruptly, consistent with previous findings. However, they found that 6,000 years ago, toward the end of this period, dust emissions were one-fifth today’s levels, and far less dusty than previous estimates.

McGee says these new measurements may give scientists a better understanding of how dust fluxes relate to climate by providing inputs for climate models.

“Dust is one of the most important aerosols for climate and biogeochemistry,” Mahowald says. “This study suggests very large fluctuations due to climate over the last 10,000 years, which has enormous implications for human-derived climate change.”

As a next step, McGee is working with collaborators to test whether these new measurements may help to resolve a longstanding problem: the inability of climate models to reproduce the magnitude of wet conditions in North Africa 6,000 years ago. By using these new results to estimate the climate impacts of dust emissions on regional climate, models may finally be able to replicate the North Africa of 6,000 years ago — a region of grasslands that were host to a variety of roaming wildlife.

“This is a period that captures people’s imaginations,” McGee says. “It’s important to understand whether and how much dust has had an impact on past climate.”

This research was funded by the National Science Foundation and by a National Oceanic and Atmospheric Administration postdoctoral fellowship to McGee.