Researchers look to the Southern Ocean for an explanation of the “Last Glacial Maximum.”
Genevieve Wanucha | Oceans at MIT
Publication Date:
Press Inquiries 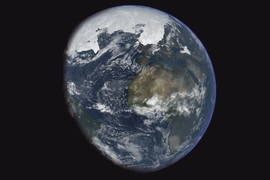 The paleoclimate record for the last ice age — a time 21,000 years ago called the “Last Glacial Maximum” (LGM) — tells of a cold Earth whose northern continents were covered by vast ice sheets. Chemical traces from plankton fossils in deep-sea sediments reveal rearranged ocean water masses, as well as extended sea ice coverage off Antarctica. Air bubbles in ice cores show that carbon dioxide in the atmosphere was far below levels seen before the Industrial Revolution.

While ice ages are set into motion by Earth’s slow wobbles in its transit around the sun, researchers agree that the solar-energy decrease alone wasn’t enough to cause this glacial state. Paleoclimatologists have been trying to explain the actual mechanism behind these changes for 200 years.

“We have all these scattered pieces of information about changes in the ocean, atmosphere, and ice cover,” says Raffaele Ferrari, the Breene M. Kerr Professor of Physical Oceanography in MIT’s Department of Earth, Atmospheric and Planetary Sciences, “and what we really want to see is how they all fit together.”

Researchers have always suspected that the answer must lie somewhere in the oceans. Powerful regulators of Earth’s climate, the oceans store vast amounts of organic carbon for thousands of years, keeping it from escaping into the atmosphere as CO2. Seawater also takes up CO2 from the atmosphere via photosynthesizing microbes at the surface, and via circulation patterns.

In a new application of ocean physics, Ferrari, along with Malte Jansen PhD ’12 of Princeton University and others at the California Institute of Technology, have found a new approach to the puzzle, which they detail in this week’s Proceedings of the National Academy of Sciences.

Lung of the ocean

The researchers focused on the Southern Ocean, which encircles Antarctica — a critical part of the carbon cycle because it provides a connection between the atmosphere and the deep ocean abyss. Ruffled by the winds whipping around Antarctica, the Southern Ocean is one of the only places where the deepest carbon-rich waters ever rise to the surface, to “breathe” CO2 in and out.

The modern-day Southern Ocean has a lot of room to breathe: Deeper, carbon-rich waters are constantly mixing into the waters above, a process enhanced by turbulence as water runs over jagged, deep-ocean ridges.

Shock to the system

This question demanded the use of the field’s accumulated knowledge of ocean physics. Using a mathematical equation that describes the wind-driven ocean circulation patterns around Antarctica, the researchers calculated the amount of water that was trapped under the sea ice by currents in the LGM. They found that the shock to the entire Earth from this added ice cover was massive: The ice covered the only spot where the deep ocean ever got to breathe. Since the sea ice capped these deep waters, the Southern Ocean’s CO2 was never exhaled to the atmosphere.

The researchers then saw a link between the sea ice change and the massive rearrangement of ocean waters that is evident in the paleoclimate record. Under the expanded sea ice, a greater amount of upwelled deep water sank back downward. Southern Ocean abyssal water eventually filled a greater volume of the entire midlevel and lower ocean — lifting the interface between upper and lower waters to a shallower depth, such that the deep, carbon-rich waters lost contact with the upper ocean. Breathing less, the ocean could store a lot more carbon.

A Southern Ocean suffocated by sea ice, the researchers say, helps explain the big drop in atmospheric CO2 during the LGM.

The study suggests a dynamic link between sea-ice expansion and the increase of ocean water insulated from the atmosphere, which the field has long treated as independent events. This insight takes on extra relevance in light of the fact that paleoclimatologists need to explain not just the very low levels of atmospheric CO2 during the last ice age, but also the fact that this happened during each of the last four glacial periods, as the paleoclimate record reveals.

Ferrari says that it never made sense to argue that independent changes drew down CO2 by the exact same amount in every ice age. “To me, that means that all the events that co-occurred must be incredibly tightly linked, without much freedom to drift beyond a narrow margin,” he says. “If there is a causality effect among the events at the start of an ice age, then they could happen in the same ratio.”

“This study is an elegant, straightforward explanation that pulls all these pieces together into one place like no one has managed to do before,” says Daniel Sigman, a professor of geological and geophysical sciences at Princeton, who was not involved in the study.

Sigman, who tries to understand carbon fluxes in the last ice age, says that this new framework narrows his focus to a smaller range of possibilities. “What it really does is tune me in to the sea ice and biochemical conditions that I need to see at the Southern Ocean’s surface for the full CO2 drop to be realized.”

The research was supported by the National Science Foundation.

Nikos Trichakis applies the tools of operations research to a wide range of problems, from medicine to corporate finance.

MIT visiting scholar motivated foundational science at the edges of the periodic table.

Energy hackers give a glimpse of the postpandemic future

The MIT EnergyHack brought together bright minds from across the world to address some of the energy sector’s most pressing challenges.

Featured video: A musical encore for a re-imagined library

Community policing in the Global South

Professor Fotini Christia is part of a team examining the challenges of implementing community policing across a range of countries.