Caption:
A coccolithophore bloom north of the Scandinavian peninsula, as seen from space. Ocean currents and eddies can be seen in the swirls of aquamarine water.
Credits:
Image: NASA Earth Observatory

Measurements from bubbles trapped in Antarctic ice-cores reveal dramatic peaks and valleys in Earth's climate system over the last 800,000 years: atmospheric carbon dioxide over the Antarctic drops by 100 parts per million over 100,000 years going into a glacial period, then rises steeply over less than 10,000 years as the Earth reaches the end of a glacial period. What drives that roller coaster, and causes its "sawtooth" shape, is a longstanding line of questioning that researchers at MIT's Darwin Project have now driven off the beaten path.

The work, recently published online in Global Biogeochemical Cycles, all began when MIT marine biogeochemist Anne Willem Omta followed through on his unconventional idea that a biochemical interaction in the ocean could have driven the sawtooth oscillation of carbon dioxide as ancient Earth slipped in and out of glacial periods. 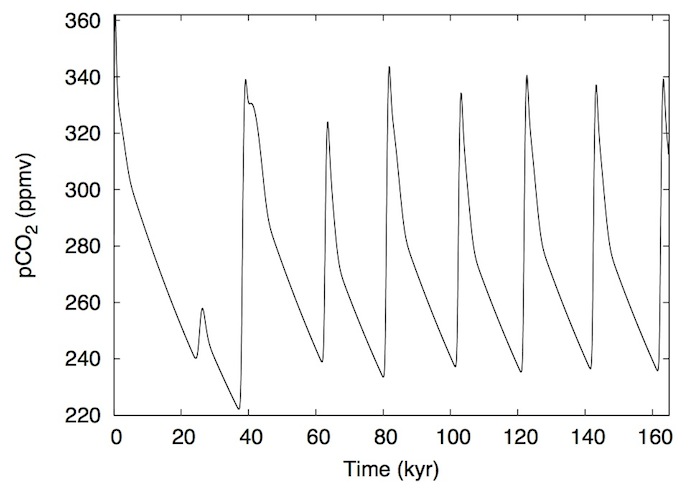 Enter biology. The ocean loses calcium carbonate thanks to the activity of calcifying marine organisms as they extract the compound from seawater to build their shells, which end up sinking into the ocean sediments. The rate at which organisms remove calcium carbonate from the ocean seems to fluctuate over vast timescales. In fact, a geological record published in 1977 shows that the amount of carbonate minerals buried in ocean sediments reaches steep highs, or "sedimentation events," at glacial-interglacial transitions in many different parts of the World Ocean.

Omta's hypothesis was born: the interaction between ocean alkalinity and calcifying single-celled phytoplankton called coccolithophores could influence the atmospheric carbon dioxide concentration — perhaps even shape it into a sawtooth.

This possibility has never been seriously considered in oceanography or paleoclimatology. "Initially, I wasn't sure how to pitch the idea," Omta says, "because it is a very uncommon connection to make between dynamics of calcifying organisms and the dynamics of glacial cycles." But Omta's idea fit right in at MIT's Darwin Group, a research collaboration led by MIT Associate Professor Mick Follows that develops novel models of marine microbes, with an emphasis on competition among evolving organism populations.

Omta imagined an evolutionary scenario. In his vision, there are long stretches of time in which the ocean is chemically more alkaline because of relatively high amounts of free-floating calcium carbonate, making conditions more favorable to the growth and reproduction of coccolithophores. Over time, the healthy reproduction rate of these coccolithophores exhausts their critical resource, leading to a steep drop in the population as they lose their competitive advantage to a different species. Then, without as many coccolithophores to suck up calcium carbonate, the natural inputs from rivers and rock weathering eventually replenish the calcium carbonate content of the ocean. Once again, conditions are prime for another boom of coccolithophores, and the cycle repeats. Such is an example of 'autocatalysis,' a reaction in which the product is at the same time an agent involved in the generation of the product.

Then came the test of the hypothesis: Omta and his collaborators designed a simple model to see whether a boom and bust coccolithophore cycle could affect atmospheric carbon dioxide concentration. Specifically, they modeled the accumulated action of evolutionarily winning or losing generations of these calcifying phytoplankton over thousands of years.

"It's a thought provoking and a fresh perspective on the problem," says Eric Galbraith, sssistant professor of earth system dynamics at McGill University. "The idea that autocatalysis is a type of process that could explain the sawtooth nature very well is something people haven't thought enough about." At the same time, Galbraith notes, the model is an extreme simplification of the Earth system and thus may not capture the true impact of coccolithophores on ocean alkalinity.

The model's new insights into the global carbon cycle could help in anticipating the possible climatic and ecological impacts of the present-day rapid and unprecedented increase in atmospheric carbon dioxide. "The model is not directly applicable to our moment because it operates on glacial-interglacial timescales," Omta says. "But you don't know what the system has in store for you if you don't even understand how, why and where the carbon dioxide was stored in the ice ages." The model makes a stronger case than ever for the ocean as a major storage vessel.

To Omta, the key element of the model is the spikes in marine calcifier populations that cause the rapid plunge in ocean alkalinity at the glacial-interglacial transitions. But it could be adapted to other autocatalytic candidates uncovered by geologists. "Maybe others will find spikes in the records that are something other than calcites and come up with nice competing hypotheses," he says. The Darwin Group has made the model available online for researchers to do just that. "So people, go ahead, come up with your own idea."