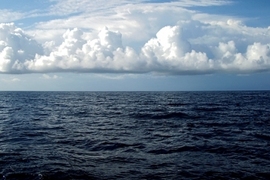 The ocean plays a critical role in climate change, especially in setting the climate's response to increasing anthropogenic emissions of greenhouse gases. As excess heat accumulates in various parts of the Earth system, most of that thermal energy goes into the ocean instead of into the lower atmosphere and land.

“We can compare the ocean to a cold compress that a parent applies to the forehead of a child with a fever,” says Yavor Kostov, a graduate student in the Program in Atmospheres, Oceans, and Climate (PAOC) within MIT’s Department of Earth, Atmospheric and Planetary Sciences (EAPS). “In that this wet towel can absorb some of the heat, giving partial relief until the towel itself becomes saturated with heat.” Similarly, the ocean’s enormous capacity to store heat temporarily slows down global warming.

In recent years, a hot topic in climate science has arisen over the fact that climate models vary widely in their representation of ocean heat uptake. The oceans in some models absorb more or less heat in high-latitude regions such as the North Atlantic and Southern Ocean; some store heat at different depths. According to two new papers published in Geophysical Research Letters, those details matter a great deal to the predictions of global warming over the coming centuries.

One of these papers focuses on the deep overturning circulation in the North Atlantic Ocean, better known as AMOC, which transports and buries atmospheric heat in the ocean. Kostov, working with Kyle Armour, an EAPS postdoc, and John Marshall, MIT professor of oceanography, investigated how the various assumptions about this major ocean feature affect model predictions. To do so, he compared a set of new-generation models that the Intergovernmental Panel on Climate Change (IPCC) uses in their projections.

Kostov found that models featuring a deeper and stronger AMOC have a greater capacity to store heat and delay long-term global warming due to increasing levels of carbon dioxide. In other words, a stronger overturning circulation in a model tends to promise a cooler world in one hundred years.

There are other even greater sources for the differences in climate predictions across models, such as cloud responses to greenhouse gases, Kostov notes, “but all aspects of the climate system are important, and we have to take into account the role of the ocean in order to improve our predictions for future warming.”

These results led the MIT group to conclude that models must better represent the AMOC and its future changes, based on real-world measurements that extend over time and geographical location. Unfortunately, there is not a long record of observations in the AMOC, thanks to the enormous technical difficulty of probing the ocean’s deep layers. However, Kostov notes his excitement that a few large-scale oceanographic projects, including U.K. RAPID and U.S. CLIVAR, have started to continuously monitor how the circulation varies with depth in an effort to fill this scientific void.

Along with depth, the geographical location of ocean heat uptake matters to climate change. Observations suggest that much of the heat enters the ocean in high-latitude regions such as the North Atlantic and Southern Ocean. In 2010, modeling by Michael Winton of the NOAA/Geophysical Fluid Dynamics Laboratory showed that ocean heat uptake at high latitudes tends to cool the Earth significantly more than heat uptake in tropics. Yet, it is unclear why heat uptake at the poles provides the most efficient air conditioning for the entire planet or how this sensitivity should be represented in models.

Offering an explanation is Brian Rose, MIT PhD ‘10, an assistant professor at the SUNY Albany Department of Atmospheric and Environmental Sciences, along with MIT's Kyle Armour and David Battisti, professor of atmospheric sciences at the University of Washington, whose new study implicates the activities of low lying clouds above the ocean. Using idealized configurations of several IPCC models, they found that when heat enters the ocean in the tropics, clouds change shape to allow more sunlight to be absorbed by the planet. This cloud transformation doesn't happen in the high latitudes, which the authors suggest as a potential reason why heat uptake in these regions is so good at cooling the planet.

“The authors show that valuable insights can be gained by considering the atmospheric response to an imposed change in the ocean,” comments Timothy Merlis, Assistant Professor at McGill University, who was not involved in the study. “And it will be important to understand why the clouds respond differently to the different regions of ocean heat uptake.”

Ultimately, the study critiques how the field uses observations in estimating the climate’s sensitivity to greenhouse gases. "A common way to calculate climate sensitivity simply combines recent observations of global surface temperature changes, heat uptake, and greenhouse gas forcing," says Armour, "which misses the details of how heat is getting into the ocean. One implication is that we can’t actually estimate long-term warming from present-day observations unless we take into account how the pattern of ocean heat uptake might change with time."

And change it will. For example, the Southern Ocean takes up a lot of heat now. But as the ocean warms over hundreds to thousands of years, the deep ocean currents will become saturated with heat and the Southern Ocean heat sink will eventually shut off. “Neglecting to account for where heat enters the ocean means that we could experience much more warming than anticipated,” Armour says.

Showing how we must look up to the clouds and down to the deep North Atlantic to improve long-term predictions of global warming, these studies converge in a new case for ocean-enlightened climate modeling.