Can rain clean the atmosphere? 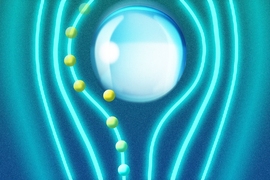 ↓ Download Image
Caption: In this illustration, a falling droplet of water is surrounded by the airstream. Aerosol particles (yellow) are attracted to the droplet. The process by which droplets and aerosols attract is coagulation, a natural phenomenon that can act to clear the air of pollutants like soot, sulfates, and organic particles.
Credits: Illustration: Jose-Luis Olivares/MIT

Caption:
In this illustration, a falling droplet of water is surrounded by the airstream. Aerosol particles (yellow) are attracted to the droplet. The process by which droplets and aerosols attract is coagulation, a natural phenomenon that can act to clear the air of pollutants like soot, sulfates, and organic particles.
Credits:
Illustration: Jose-Luis Olivares/MIT

As a raindrop falls through the atmosphere, it can attract tens to hundreds of tiny aerosol particles to its surface before hitting the ground. The process by which droplets and aerosols attract is coagulation, a natural phenomenon that can act to clear the air of pollutants like soot, sulfates, and organic particles.

Atmospheric chemists at MIT have now determined just how effective rain is in cleaning the atmosphere. Given the altitude of a cloud, the size of its droplets, and the diameter and concentration of aerosols, the team can predict the likelihood that a raindrop will sweep a particle out of the atmosphere.

The researchers carried out experiments in the group’s MIT Collection Efficiency Chamber — a 3-foot-tall glass chamber that generates single droplets of rain at a controlled rate and size. As droplets fell through the chamber, researchers pumped in aerosol particles, and measured the rate at which droplets and aerosols merged, or coagulated.

From the measurements, they calculated rain’s coagulation efficiency — the ability of a droplet to attract particles as it falls. In general, they found that the smaller the droplet, the more likely it was to attract a particle. Conditions of low relative humidity also seemed to encourage coagulation.

Dan Cziczo, the Victor P. Starr Career Development Professor of Atmospheric Chemistry, says the new results, published this month in the journal Atmospheric Chemistry and Physics, represent the most accurate values of coagulation to date. These values, he says, may be extrapolated to predict rain’s potential to clear a range of particles in various environmental conditions.

“Say you’re a modeler and want to figure out how a cloud in Boston cleans the atmosphere versus one over Chicago that’s much higher in altitude — we want you to be able to do that, with this coagulation efficiency number we produce,” Cziczo says. “This can help address issues such as air quality and human health, as well as the effect of clouds on climate.”

Cziczo’s group is not the first to simulate the interaction of rain and aerosols in the lab. Over the past decade, others have built intricate chambers to track coagulation. But the MIT researchers found these events were very rare, and extremely difficult to pick out. Scientists had known that a droplet’s electric charge plays a big role in attracting particles, so Cziczo and his colleagues began to alter the charges of droplets and particles to force coagulation to occur.

“This is where we really started getting ourselves in trouble as scientists,” Cziczo says of the field. “To actually get the process to work, people were tuning it into a range that was not atmospherically relevant.”

As a result, researchers were seeing many more coagulation events. However, the results were based on electric charges that were much higher than what had been observed in the atmosphere.

“In some cases, we were seeing people using 10 or 100 times the charge, which maybe you’d only see in the middle of the most severe thunderstorm ever,” Cziczo says.

To get a more accurate picture of coagulation, Cziczo’s group constructed a new chamber with a single-droplet generator, an instrument that can be calibrated to produce single droplets at a specific size, frequency, and charge. Typically, droplet generators impart too much charge onto a droplet. To produce electrical charges that droplets actually carry in the atmosphere, the team used a small radioactive source to strip away a small amount of charge from each droplet.

The team then pumped the lower part of the chamber with aerosol particles of a known size. As they fell to the floor, droplets evaporated, leaving only salt — and, if coagulation occurred, aerosols. The residual particles were then piped through a single particle mass spectrometer, which determined whether salt — and thereby, the droplet — attracted an aerosol.

The researchers ran multiple experiments, varying the relative humidity of the chamber, as well as the droplet size and frequency. They calculated the coagulation efficiency for each run, and found that smaller droplets were more likely to attract aerosols, particularly under conditions of low relative humidity.

Ultimately, Cziczo says, a better understanding of particle and droplet interactions will give scientists a clearer idea of climate change’s trajectory: One of the major uncertainties in global warming projections is how greenhouse gases will affect cloud formation. As clouds play a major role in maintaining the Earth’s radiative budget — how much heat is trapped or escapes — Cziczo says it’s essential to understand the relationship between a cloud’s water droplets and particles in the atmosphere.

“This type of data is lacking in the literature and should improve model simulations of how cloud and fog droplets can scavenge aerosol particles,” says Margaret Tolbert, a professor of chemistry and biochemistry at the University of Colorado who was not involved in the study. “Improvements in understanding aerosol microphysics ultimately helps with predictions of air quality and climate change, since aerosols are central to both.”

This research was funded, in part, by the National Oceanic and Atmospheric Administration.

Dust in the clouds