A week at MIT 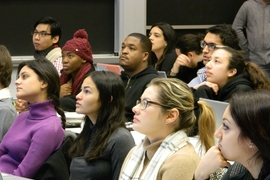 ↓ Download Image
Caption: Students from 10 colleges and universities listen to a lecture by Eric Wang at the seven-day Quantitative Methods Workshop, held at MIT from Jan. 2–9.
Credits: Photo: Mandana Sassanfar 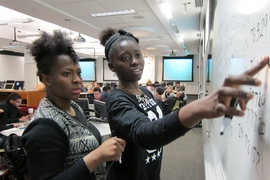 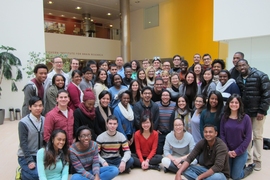 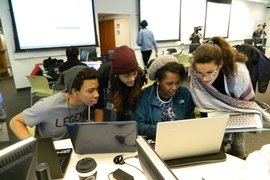 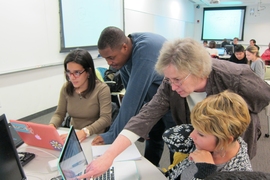 Caption:
Students from 10 colleges and universities listen to a lecture by Eric Wang at the seven-day Quantitative Methods Workshop, held at MIT from Jan. 2–9.
Credits:
Photo: Mandana Sassanfar

Caption:
Two students from the University of Puerto Rico receive help from experts on a MATLAB exercise.

The first week of the new year brought smatterings of undergraduates returning to the MIT campus after the holidays — and 54 new faces were among them.

These students traveled from across the country to attend the annual Quantitative Methods Workshop, a weeklong event with lectures and classes for undergraduates from partner institutions including Howard University, Hunter College, and the University of Puerto Rico.

The workshop, sponsored by the Department of Biology and the National Science Foundation-funded Center for Brains, Minds, and Machines, focused on how computer programming can apply to problems in biology and neuroscience.

Amy Keating, co-director of MIT’s graduate program in biology, has taught at the workshop for the past five years. “The workshop gives students with a broad range of backgrounds exposure to the exciting ways in which quantitative tools are applied in modern biological research,” Keating says. “Some math and computer science students don’t realize that they can make important contributions to biology research until [this workshop].”

Mandana Sassanfar, a lecturer in the biology department, organizes the workshop. “We want to give them a spark, provide them the tools and the basic knowledge,” Sassanfar says. “When they go back to school, they can try to do something with what they have learned.”

An intense and rewarding experience

Each morning during the workshop, students attended a lecture on a range of relevant topics, such as modeling activated neurons, machine learning in neuroscience, and gene-sequencing technology.

“We take this deep dive into the problems of their field,” says Talmo Pereira, a bioinformatics and computational biology major at the University of Maryland, Baltimore County. “Then in the afternoons, we learn some computational method for how to approach those problems. And so it really does reinforce this notion that, no matter what field of biology you’re in, you need these computational methods in order to solve these very basic and essentially biological problems.”

This was Pereira’s second year at the workshop: Like many of the students there, he first found out about it when he attended the MIT Summer Research Program (MSRP), working in a research lab on campus. This year, he helped out during the week as a teaching assistant.

Throughout the workshop, students completed assignments through an online course module on the MITx website, where they could submit work and check their code. MITx also offers an eight-week online version of the course — known as “Quantitative Biology Workshop” — through edX.

The workshop welcomed students with a wide range of backgrounds; some participants had never programmed before, while others were new to biology.

“I didn’t realize how important it is, as a bio and chemistry major, to also have a background in programming,” says Sheena Vasquez, a junior at Georgia Perimeter College.

“I have no formal background in biology,” says Alejandro Vientos, a computer science major at the University of Puerto Rico. “This has done a lot to push me in that direction — biology has a lot of interesting problems.”

For several students, the time they spent at MIT through the MSRP and the Quantitative Methods Workshop provided an unexpected boost of confidence.

“One of the things I really love about this program is the collaboration and the high caliber of everyone here,” says Kevin White, a biology and neuroscience major at Howard University. “It inspires you to do your best and go to the top, and not be afraid to do what you didn’t think you could do.”

“The idea of applying to a top school became more attainable,” adds Candace Ross, a computer engineering major at Howard.

Cassandra Schaening, who attended the workshop two years ago, felt the same way. “It was sort of that whole thing where you don’t think you’re competitive enough, but it was after I came here that I was actually more encouraged to apply,” she says. Now, Schaening is a graduate student in computational and systems biology at MIT.

“Even in such a short workshop, you work at a really intense pace. The workshop is seven days, 10-hour days; you’re just working constantly and absorbing new information every minute,” Schaening says. “It’s just so much more than you’re used to doing, and you realize — this is something I can do. I can work at this level. And you want more of it.”