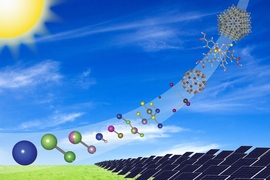 ↓ Download Image
Caption: Illustration shows the MIT team’s proposed scheme for comparing different photovoltaic materials, based on the complexity of their basic molecular structure. The complexity increases from the simplest material, pure silicon (single atom, lower left), to the most complex material currently being studied for potential solar cells, quantum dots (molecular structure at top right). Materials shown in between include gallium aresenide, perovskite and dye-sensitized solar cells.
Credits: Courtesy of the researchers 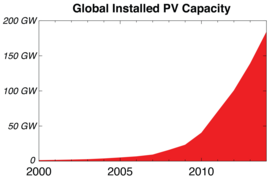 ↓ Download Image
Caption: Chart from the MIT report shows the extremely rapid worldwide growth of photovoltaic installations over the last 15 years.
Credits: Courtesy of the researchers

Caption:
Illustration shows the MIT team’s proposed scheme for comparing different photovoltaic materials, based on the complexity of their basic molecular structure. The complexity increases from the simplest material, pure silicon (single atom, lower left), to the most complex material currently being studied for potential solar cells, quantum dots (molecular structure at top right). Materials shown in between include gallium aresenide, perovskite and dye-sensitized solar cells.
Credits:
Courtesy of the researchers

Caption:
Chart from the MIT report shows the extremely rapid worldwide growth of photovoltaic installations over the last 15 years.
Credits:
Courtesy of the researchers

In a broad new assessment of the status and prospects of solar photovoltaic technology, MIT researchers say that it is “one of the few renewable, low-carbon resources with both the scalability and the technological maturity to meet ever-growing global demand for electricity.”

Use of solar photovoltaics has been growing at a phenomenal rate: Worldwide installed capacity has seen sustained growth averaging 43 percent per year since 2000. To evaluate the prospects for sustaining such growth, the MIT researchers look at possible constraints on materials availability, and propose a system for evaluating the many competing approaches to improved solar-cell performance.

The analysis is presented in the journal Energy & Environmental Science; a broader analysis of solar technology, economics, and policy will be incorporated in a forthcoming assessment of the future of solar energy by the MIT Energy Initiative.

The team comprised MIT professors Vladimir Bulović, Tonio Buonassisi, and Robert Jaffe, and graduate students Joel Jean and Patrick Brown. One useful factor in making meaningful comparisons among new photovoltaic technologies, they conclude, is the complexity of the light-absorbing material.

The report divides the many technologies under development into three broad classes: wafer-based cells, which include traditional crystalline silicon, as well as alternatives such as gallium arsenide; commercial thin-film cells, including cadmium telluride and amorphous silicon; and emerging thin-film technologies, which include perovskites, organic materials, dye-sensitized solar cells, and quantum dots.

With the recent evolution of solar technology, says Jean, the paper’s lead author, it’s important to have a uniform framework for assessment. It may be time, he says, to re-examine the traditional classification of these technologies, generally into three areas: silicon wafer-based cells, thin-film cells, and “exotic” technologies with high theoretical efficiencies.

“We’d like to build on the conventional framework,” says Jean, a doctoral student in MIT’s Department of Electrical Engineering and Computer Science. “We’re seeking a more consistent way to think about the wide range of current photovoltaic technologies and to evaluate them for potential applications. In this study, we chose to evaluate all relevant technologies based on their material complexity.”

Under this scheme, traditional silicon — a single-element crystalline material — is the simplest material. While crystalline silicon is a mature technology with advantages including high efficiency, proven reliability, and no material scarcity constraints, it also has inherent limitations: Silicon is not especially efficient at absorbing light, and solar panels based on silicon cells tend to be rigid and heavy. At the other end of the spectrum are perovskites, organics, and colloidal quantum dots, which are “highly complex materials, but can be much simpler to process,” Jean says.

The authors make clear that their definition of material complexity as a key parameter for comparison does not imply any equivalency with complexity of manufacturing. On the contrary, while silicon is the simplest solar-cell material, silicon wafer and cell production is complex and expensive, requiring extraordinary purity and high temperatures.

By contrast, while some complex nanomaterials involve intricate molecular structures, such materials can be deposited quickly and at low temperatures onto flexible substrates. Nanomaterial-based cells could even be transparent to visible light, which could open up new applications and enable seamless integration into windows and other surfaces. The authors caution, however, that the conversion efficiency and long-term stability of these complex emerging technologies is still relatively low. As they write in the paper: “The road to broad acceptance of these new technologies in conventional solar markets is inevitably long, although the unique qualities of these evolving solar technologies — lightweight, paper-thin, transparent — could open entirely new markets, accelerating their adoption.”

The study does caution that the large-scale deployment of some of today’s thin-film technologies, such as cadmium telluride and copper indium gallium diselenide, may be severely constrained by the amount of rare materials that they require. The study highlights the need for novel thin-film technologies that are based on Earth-abundant materials.

The study identifies three themes for future research and development. The first is increasing the power-conversion efficiency of emerging photovoltaic technologies and commercial modules.

A second research theme is reducing the amount of material needed per cell. Thinner, more flexible films and substrates could reduce cell weight and cost, potentially opening the door to new approaches to photovoltaic module design.

A third important research theme is reducing the complexity and cost of manufacturing. Here the researchers emphasize the importance of eliminating expensive, high-temperature processing, and encouraging the adoption of roll-to-roll coating processes for rapid, large-scale manufacturing of emerging thin-film technologies.

“We’ve looked at a number of key metrics for different applications,” Jean says. “We don’t want to rule out any of the technologies,” he says — but by providing a unified framework for comparison, he says, the researchers hope to make it easier for people to make decisions about the best technologies for a given application.

Martin Green, a professor at the Australian Centre for Advanced Photovoltaics at the University of New South Wales who was not involved in this work, says the MIT team has produced “some interesting new insights and observations.” He says the paper’s main significance “lies in the attempt to take a unifying look at the issues involved in choosing between PV technologies.”

“The issues involved are complex,” Green adds, “and the authors abstain from betting on any particular PV technology.”