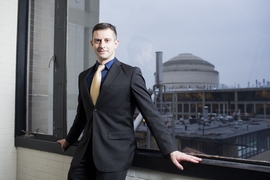 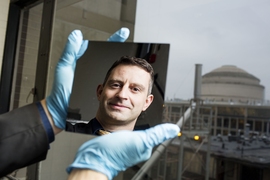 One day in the 1990s, as he was riding home from high school in São Paulo, Tonio Buonassisi looked out the bus window at the Brazilian city’s long lines of traffic, and its smoggy haze. In that moment, he realized that there had to be better ways for people to produce and use energy — and that he wanted to try to do something about it.

“São Paulo is one of the largest cities in the world, and was one of the world’s most polluted cities,” Buonassisi recalls. “I was taking the bus home from basketball practice … one of the worst times to be breathing in pollution is right after exercising.” The pollution, which was especially bad that day, led to his decision, at age 16, to work to advance solar energy or public transportation.

Since then, Buonassisi — who recently earned tenure at MIT as an associate professor of mechanical engineering — has taken a few different turns in pursuing that aim, but the desire to find cleaner energy has stayed with him.

Buonassisi was born in San Diego to an American mother and an Italian father, both of whom were molecular biologists. “I grew up in a lab,” he says: He would fill pipettes to earn his allowance. He spent his adolescence in Brazil, and moved to the U.S. to attend the University of Notre Dame, and later the University of California at Berkeley for graduate school. It was at Berkeley that he met his Swedish-born wife, Tove; the couple now has a young daughter.

How to move the needle

After earning his doctorate, Buonassisi briefly went to industry, taking a research position at Evergreen Solar, a solar-cell company spun out of MIT. But ultimately, deciding that an academic career that combined research and teaching offered him “the best opportunity to push the needle” on energy and climate change, he joined the faculty of MIT’s Department of Mechanical Engineering in 2007, where he established the Photovoltaics Research Laboratory.

“It’s a mission-oriented lab,” Buonassisi says. “That’s what motivates us, but we’re also all passionate about the process. There’s a childlike joy of being in the lab, and a scientific joy in tackling hard problems.” While he admits to preferring the California climate, he was drawn to the intense culture of curiosity and exploration at MIT. Here, he says, “You can be unapologetically nerdy.”

When Buonassisi set up his research group at MIT, many analysts doubted that photovoltaics could ever compete with fossil-fuel-based power plants. “In 2007, that was the majority belief,” he says. But since then, he says, prices have dropped about 80 percent for standard silicon solar cells; last year, new solar power-generating capacity in the United States exceeded new natural gas-generating capacity.

Still, more progress is needed, he says: “We’re still about a factor of two from where we need to be for sustainable long-term growth.” Buonassisi and his team are now working on various techniques with the potential to bring about that kind of reduction.

Better ways to use silicon

Buonassisi points out that improvements in solar-cell materials and manufacturing are crucial to reducing the greenhouse-gas emissions associated with power generation. Using today’s technology, just processing the silicon to make enough solar cells to replace existing fossil-fuel plants would consume more energy than the United States uses annually. To get around that, Buonassisi has focused much of his group’s research on developing solar cells that use far less silicon, or that can use less-refined forms of the material.

For example, in recent research his group produced a method for quantifying the extent and location of defects in silicon crystals, allowing the manufacturing process to achieve good performance from a much lower-grade silicon material. Other ongoing projects are exploring different approaches to producing much thinner wafers of silicon that can yield comparable power output, or that can reduce or eliminate the waste of current methods that saw wafers from a large block of crystal. His lab is also examining methods of producing fuel from solar energy.

Buonassisi sees parallels between the dualities he has experienced — between hemispheres, languages, industry versus academia, and pure versus applied science — and the fundamental questions he tackles in the lab. “It’s about exploring those interfaces, and looking at them as opportunities,” he says. “A lot of the interesting things in life happen at the boundaries.”