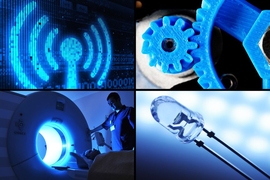 How fast is online learning evolving? Are wind turbines a promising investment? And how long before a cheap hoverboard makes it to market?

Attempting to answer such questions requires knowing something about the rate at which a technology is improving. Now engineers at MIT have devised a formula for estimating how fast a technology is advancing, based on information gleaned from relevant patents.

The researchers determined the improvement rates of 28 different technologies, including solar photovoltaics, 3-D printing, fuel-cell technology, and genome sequencing. They searched through the U.S. Patent Office database for patents associated with each domain — more than 500,000 total — by developing a novel method to quickly and accurately select the patents that best represent each technology.

Once these were identified, the researchers analyzed certain metrics across patents in each domain, and found that some were more likely to predict a technology’s improvement rate than others. In particular, forward citations — the number of times a patent is cited by subsequent patents — is a good predictor, as is the date of a patent’s publication: Technologies with more recent patents are likely innovating at a faster rate than those with older patents.

The team devised an equation incorporating a patent set’s average forward citation and average publication date, and calculated the rate of improvement for each technology domain. Their results matched closely with the rates determined through the more labor-intensive approach of finding numerous historical performance data points for each technology.

Among the 28 domains analyzed, the researchers found the fastest-developing technologies include optical and wireless communications, 3-D printing, and MRI technology, while domains such as batteries, wind turbines, and combustion engines appear to be improving at slower rates.

Chris Benson, a former graduate student in MIT’s Department of Mechanical Engineering, says the new prediction tool may be of interest to venture capitalists, startups, and government and industry labs looking to explore new technology.

“There’s a lot of nuance to our method, and I don’t see it as something to hand out to the masses to play with,” says Benson, who helped developed the prediction tool. “I see it more as something where we work with somebody to help them understand what the future technological capabilities that they’re interested in are. We’re probably more like a real estate agent, and less like Zillow.”

Benson and Chris Magee, a professor of the practice of engineering systems at MIT, have published their results this week in the journal PLoS ONE. The paper contains the fundamental findings and equations relating technological improvement to a variety of patent characteristics.

In 2003, Magee began determining the improvement rates of various technologies. At the time, he was curious how technologies were developing relative to Moore’s Law — an observation pertaining originally to computers, in which transistors on a computer chip double every two years.

“There were a lot of things that weren’t going as fast as Moore’s Law, and I started trying to get measures of them,” Magee recalls.

Magee initially approached the problem on a case-by-case basis, determining which metrics best represent productivity for a given domain. He then compiled data for each metric, such as the price and speed of manufacturing a product, and used the data to calculate the overall rate of improvement. In 2010, he realized that one of the most comprehensive resources on technology lay in the U.S. patent record.

“We thought, ‘Maybe there’s enough information there that we can do something about linking it to the dynamism of technical change,’” Magee says.

For several years, he and his group identified the most relevant patents in a technological domain, by literally reading through thousands of patents — an incredibly time-intensive process. The approach was not very reliable, as two people may choose entirely different sets of patents to represent the same technology.

A “Standard & Poor’s” for technology

In 2012, Magee and Benson came up with a more efficient, repeatable method for identifying relevant patent sets, by looking at the overlap between the U.S. and international patent-classification systems.

For each patent accepted by the U.S. Patent Office, a patent reviewer will file the patent under several classes within both classification systems. For instance, a solar photovoltaics patent may be entered under the U.S. classes “batteries” and “active solid-state devices” and within the international system as “semiconductor devices.”

The team found that by looking for patent overlap between both classification systems, they could repeatedly identify the same set of patents that best represent a technology, within a matter of hours, rather than months.

Once they identified a relevant set of patents, the researchers looked for metrics within patents that they could use to calculate a technology’s rate of improvement. They found that a patent set’s average forward citations within the first three years after publication, and the average date of publication, were the best predictors of technological improvement. Benson says they were also able to weed out less-helpful patent information.

“If a technology has more patents in general, it should be moving faster, but that turns out not to be the case,” Benson says. “3-D printing only has 300 to 500 patents, and that’s improving at the same rate as semiconductors, which have about 150,000 patents. So there’s almost zero correlation.”

The team devised a simple equation incorporating forward citation and publication date, and used the method to predict improvement rates for 28 technologies. The researchers then compared the rates with those they previously obtained using their more time-intensive, historical data-based approach, and found the results from both methods matched closely.

They then used their more efficient approach to predict the improvement rates of 11 emerging technologies in the next 10 years. Among these, the fastest-growing domains appear to be online learning and digital representation, while slower technologies include food engineering and nuclear fusion.

Doyne Farmer, a professor of mathematics at Oxford University, says that the notion that technological progress is predictable “is both intellectually fascinating and quite powerful in its practical implications.”

“[The group’s] methods should be useful to any organization that is considering investments in technology, in particular government funding agencies such as the [U.S. Department of Energy] that fund engineering applications; venture-capital firms; or firms that are actually in the technology business,” says Farmer, who was not involved in the research. “Making the right bets on technological progress is essential for solving problems such as climate change. Thus, we should all benefit from this work.”

Magee hopes the method may be used much like a rating system, similar to Standard & Poor’s and other stock-market indices. Such ratings could be useful for investors looking for the next big breakthrough, as well as scientific labs that are contemplating new research directions. Magee says knowing how various technologies may improve in the next decade could give innovators an idea of when “feeder technologies” may mature, and enable more pie-in-the-sky ideas, like mass-produced hoverboards and flying cars.

“We can help reduce the uncertainty of the capabilities of a technology in the future, not to zero, but to a more manageable number,” Benson says. “I believe that’s valuable in a lot of different ways.”

This research was funded in part by the SUTD/MIT International Design Center in Singapore.