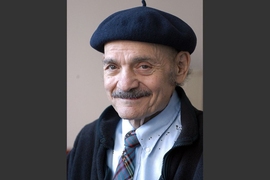 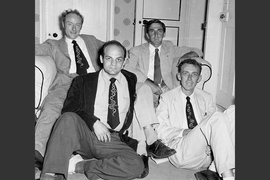 ↓ Download Image
Caption: Rich (front row, left) was a member of the RNA Tie Club, which had 20 members, one representing each amino acid. Rich is joined in this 1955 photo by biophysicist James Watson (front row, right), chemist Leslie Orgel (back row, right) and molecular biologist Francis Crick. Watson and Crick together discovered the double helix structure of DNA in 1953.
Credits: Courtesy of Alexander Rich

Caption:
Rich (front row, left) was a member of the RNA Tie Club, which had 20 members, one representing each amino acid. Rich is joined in this 1955 photo by biophysicist James Watson (front row, right), chemist Leslie Orgel (back row, right) and molecular biologist Francis Crick. Watson and Crick together discovered the double helix structure of DNA in 1953.

Alexander Rich, an MIT biophysicist best known for his work on the structural biology of RNA and DNA, died Monday at Massachusetts General Hospital in Boston. He was 90.

Rich, the William Thompson Sedgwick Professor in MIT’s Department of Biology, continued coming in to his office until two months ago, when he was admitted to the hospital.

A pre-eminent researcher in structural molecular biology — a field that seeks to understand the molecular architecture of living organisms — Rich made major contributions to understanding the relationships between the structures and functions of RNA and DNA molecules.

James Watson and Francis Crick first described the right-handed, double helical structure of DNA in 1953. In 1979, Rich led a team of MIT researchers who startled the world of structural biology with the announcement that they had found a “left-handed” form of DNA. The new form, coiled in the shape of a left-handed screw, was called Z-DNA because of its zigzag backbone, but its significance remained a mystery for many years.

“After the initial discovery, many labs set out to understand the biology of Z-DNA, which turned out to be a much more difficult endeavor than discovering the structure in the first place,” says Thomas Schwartz, an associate professor of biology at MIT who was a PhD student of Rich’s and helped decipher the function of Z-DNA. “While we still do not fully understand its biological role, the work on Z-DNA emphasized perhaps more than any other single piece of data how important the three-dimensional conformation of DNA in the context of the cell is.”

In 1995, researchers led by Rich reported the first biological role for left-handed Z-DNA and detailed the identification of a protein that binds tightly to Z-DNA. The protein has long been recognized as an “editor” that can change the genetic message of RNA. Its affinity for Z-DNA may help it find genes that are producing the messenger RNA that it edits.

Rich’s pioneering work started in 1955 when, together with a colleague, he deduced the three-dimensional, triple helical structure of collagen, the major fibrous protein of skin and connective tissue.

One year later, as a section chief in physical chemistry at the National Institutes of Health, he and a colleague discovered that two single-stranded nucleic acid molecules could spontaneously and specifically combine to form a double helix. This was the first hybridization reaction, a reaction that in various forms became a major technique in the development of molecular biology. In 1957, his group discovered that nucleic acids could form triple helices, a finding widely used in biotechnology today.

At MIT in 1960, Rich discovered that an RNA strand and a DNA strand could form a double helix, which helped explain how cells copy DNA into messenger RNA.

He led student researchers in 1962 to the discovery of polysomes, the clusters of protein synthesis machinery held together by a messenger RNA molecule. These are the functional units used by cells to translate genetic information into proteins.

From 1949 to 1954 he was a research fellow in chemistry with Linus Pauling at Gates and Crellin Laboratories at Caltech. He served as chief of the section on physical chemistry at the National Institute of Mental Health from 1954 to 1958, and was a visiting scientist at the Cavendish Laboratory in Cambridge, England, from 1955 to 1956. From 1969 to 1980, Rich was an investigator in NASA’s Viking mission to Mars, working on experiments designed to look for life on that planet.

He joined the MIT faculty in 1958, and mentored generations of students.

“Alex was a bright beacon and a good mentor,” says Shuguang Zhang, a principal research scientist at MIT’s Center for Bits and Atoms who worked closely with Rich. “The most important thing Alex taught us is open-mindedness. Open-mindedness opened a new world for each one of us.”

“Alex was an inspirational scientist,” Schwartz adds. “Always keen on solving the next scientific puzzle, always keen on figuring out the latest technology to move forward. His curiosity was second to none.”

In 1980, Rich was presented with MIT’s James R. Killian Jr. Faculty Achievement Award, given for extraordinary professional accomplishments by faculty members. He won the $250,000 Bower Award for Achievement in Science in 2000, was presented with Sigma Xi’s William Procter Prize for Academic Achievement in 2001, and was awarded the Lomonosov Large Gold Medal from the Russian Academy of Sciences in 2002. In 2008 he was named the 38th recipient of the $300,000 Welch Award in Chemistry.

He received several honorary degrees, as well as the Rosenstiel Award in Basic Biomedical Research and the Presidential Award of the New York Academy of Sciences.

A memorial gathering will be held on Sunday, May 3, at the Norton Woods Conference Center, 200 Beacon St., Somerville, Mass., from 1-5 p.m.

Kathleen McKenna of The Boston Globe writes that Professor Alexander Rich, whose research confirmed DNA’s double-helix structure, died at 90 on April 27. Shuguang Zhang, associate director of the Center for Biomedical Engineering at MIT, said that Rich was “warm, wonderful, and open-minded.”

Washington Post reporter Martin Weil writes that Prof. Alexander Rich, who was known for his work with molecular biology, passed away on April 27. Rich’s work on hybridization, the pairing of two single strands of DNA or RNA, “is regarded as integral to creating much of modern biotechnology, with applications in diagnostics, forensics, genealogy and gene sequencing.”

Prof. Alexander Rich, a noted biophysicist known for his work investigating the structure of DNA and RNA, died on April 27, writes Denise Gellene for The New York Times. “I can think of no one else who has made as many major contributions to all facets of modern molecular biology,” said University of Maryland Prof. Robert C. Gallo.