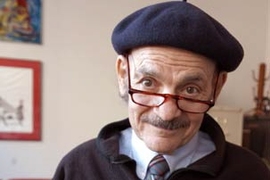 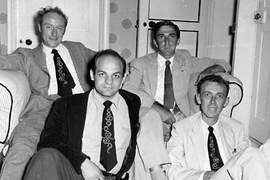 Caption:
Alexander Rich, front row, left, was a member of the RNA Tie Club, which had 20 members, one representing each amino acid. Rich is joined in this 1955 photo by biophysicist James Watson (front row, right), chemist Leslie Orgel (back row, right) and molecular biologist Francis Crick. Watson and Crick together discovered the double helix structure of DNA in 1953.
Credits:
Photo courtesy / Alexander Rich

Profound doubts were the frequent response when MIT biophysicist Alexander Rich announced that two single-strand ribonucleic acid (RNA) molecules could spontaneously align themselves to form a double helix, just like those of their famous cousin, DNA. Many biologists thought it impossible; the rest considered it unlikely.

Today, 50 years later, it is abundantly clear that Rich--who made the discovery with David R. Davies while both were working at the National Institute of Mental Health--was onto something big. In fact, it generated a paradigm shift in the science of biology. The discovery changed how research is done at the molecular level and helped spawn what has become the global biotechnology revolution.

To mark the anniversary, Rich was invited to write an article about the work in the December issue of The Scientist. Likewise, Professor Alexander Varshavsky of Caltech wrote an article for Cell that appeared in the Dec. 29 issue.

In 1956 Rich and Davies announced in the Journal of the American Chemical Society that single strands of RNA can "hybridize," joining together to form a double-stranded molecule. As a result of the discovery and the work that followed, scientists now routinely identify, isolate, manipulate and replace the genes in living things. Such work led to the Human Genome Project and is pushing science toward a fundamental understanding of how life works.

"This was a founding technology of the biotechnology business," explained Rich, the William Sedgwick Thompson Professor of Biophysics. "The discovery was absolutely remarkable because no one, myself included, thought such a thing was possible and could work."

The seminal discovery of double-stranded RNA by Rich and Davies came only three years after James Watson and Francis Crick stunned the scientific world by describing DNA's structure as a double helix. Watson and Crick not only described a structure, but also suggested how inherited information--genetic information--is safely stored and can be passed from one generation to the next. It was a major milestone in the biosciences.

In 1953, Rich--working with famed chemist Linus Pauling at Caltech--was using X-ray crystallography to try to discover the structure of RNA, hoping to learn more about its role in life. One nagging question was whether RNA, like DNA, could exist in a double-stranded helical molecule.

The x-ray images weren't helping much; they were fuzzy, inconclusive shadows of the gooey, glassy fibers that were pulled from a glob of RNA.

At Caltech, and later at the NIH, Rich and his colleagues "talked a lot about RNA," he told a reporter from Chemical and Engineering News last month. "But nobody--including myself--suggested, 'Why don't you mix together PolyA and Poly U,' the two differing stands of RNA. It wasn't at all obvious that could work," he said, in part because everyone felt an enzyme would be needed to stitch them together. "People had no idea that hybridization could occur by itself."

Ultimately Rich did try mixing the two strands, resulting in the discovery of double-stranded RNA, but to this day, he said, he can't recall what prompted him to do so. "I've asked my colleagues and searched through my memory, and I don't actually know." But it did work, and that has made all the difference.

A version of this article appeared in MIT Tech Talk on January 10, 2007 (download PDF).