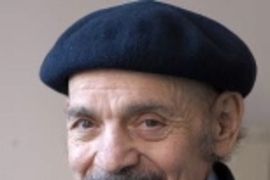 For his pioneering work that has helped scientists unlock the mysteries of RNA and DNA, as well as more than half a century of important scientific discoveries that have opened up new fields of science, Alexander Rich was today named the 38th recipient of the international Welch Award in Chemistry.

Rich, the William Thompson Sedgwick Professor of Biophysics, is the first MIT faculty member to receive the Welch Award, which is given annually to foster basic chemical research and recognize how chemical research benefits humankind.

"Dr. Rich is one of the towering intellects in science of the 20th and 21st centuries," said James L. Kinsey, chair of the Welch Scientific Advisory Board. "His numerous contributions have provided such important fundamental insights that virtually every important area of biochemistry or molecular biology today has Dr. Rich's fingerprints on it."

The Welch Foundation, based in Houston, is one of the nation's oldest and largest sources of private funding for basic research in chemistry. It will present the $300,000 award and gold medallion to Rich at a banquet in his honor in October.

"I had the good fortune of beginning my research when it was still possible to ask fundamental questions about the nature of nucleic acids and how information is transferred in living systems. Because of that, I was able to make some important discoveries, which has been exhilarating," Rich said. "I am truly honored that my work is being recognized with the Welch Award, which is made more meaningful by the fact that I admire and so deeply respect the past recipients."

When Rich began his career in the early 1950s, DNA's double helix had been deciphered; however, very little was known about RNA until Rich discovered that RNA could produce a double helix. He also discovered the first hybridization reaction. This revelation produced a major paradigm shift in scientific thinking at the time.

Rich joined MIT in 1958, becoming the first to carry out DNA-RNA hybridization, which opened the door to understanding how information can be transferred from DNA to RNA. He also discovered left-handed DNA, which has proven to be extremely important to biological systems and immunology in the ensuing years. Rich is currently researching the biological roles of the left-handed form of DNA--called Z-DNA--and the proteins that bind to it.