New exoplanet in our neighborhood 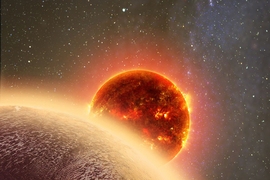 ↓ Download Image
Caption: In this artist's rendering of GJ 1132b, a rocky exoplanet very similar to Earth in size and mass, circles a red dwarf star. GJ 1132b is relatively cool (about 450 degrees F) and could potentially host an atmosphere. At a distance of only 39 light-years, it will be a prime target for additional study with Hubble and future observatories like the Giant Magellan Telescope. 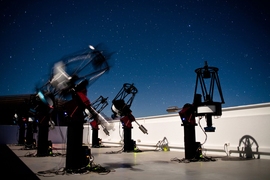 Caption:
In this artist's rendering of GJ 1132b, a rocky exoplanet very similar to Earth in size and mass, circles a red dwarf star. GJ 1132b is relatively cool (about 450 degrees F) and could potentially host an atmosphere. At a distance of only 39 light-years, it will be a prime target for additional study with Hubble and future observatories like the Giant Magellan Telescope.
Credits:
Image: Dana Berry

Caption:
The MEarth-South telescope array, located on Cerro Tololo in Chile, searches for planets by monitoring the brightness of nearby, small stars. This long-exposure photograph shows MEarth-South telescopes observing at night; the blurred telescope is slewing from one star to another.
Credits:
Photo: Jonathan Irwin

Scientists have discovered a new exoplanet that, in the language of “Star Wars,” would be the polar opposite of frigid Hoth, and even more inhospitable than the deserts of Tatooine. But instead of residing in a galaxy far, far away, this new world is, galactically speaking, practically next door.

The new planet, named GJ 1132b, is Earth-sized and rocky, orbiting a small star located a mere 39 light-years from Earth, making it the closest Earth-sized exoplanet yet discovered. Astrophysicists from MIT and elsewhere have published these findings today in the journal Nature.

Based on their measurements, the scientists have determined that the planet is a roasting 500 degrees Fahrenheit, and is likely tidally locked, meaning that it has a permanent day and night side, presenting the same face to its star, much like our moon is locked to the Earth.

Because of its scorching temperatures, GJ 1132b most likely cannot retain liquid water on its surface, making it uninhabitable for life as we know it. However, scientists say it is cool enough to host a substantial atmosphere.

The planet is also close enough to Earth that scientists may soon be able to find out much more about its characteristics, from the composition of its atmosphere to the pattern of its winds — and even the color of its sunsets.

“If we find this pretty hot planet has managed to hang onto its atmosphere over the billions of years it’s been around, that bodes well for the long-term goal of studying cooler planets that could have life,” says Zachory Berta-Thompson, a postdoc in MIT’s Kavli Institute for Astrophysics and Space Research. “We finally have a target to point our telescopes at, and [can] dig much deeper into the workings of a rocky exoplanet, and what makes it tick.”

Scientists have discovered a new exoplanet only 39 light-years away, making it the closest exoplanet to Earth ever discovered.

A nearby solar neighbor

Berta-Thompson and his colleagues discovered the planet using the MEarth-South Observatory, a Harvard University-led array of eight 40-centimeter-wide robotic telescopes located in the mountains of Chile. The array monitors small, nearby stars called M dwarfs, which are scattered all over the night sky. Scientists have determined that these kinds of stars are frequently orbited by planets, but haven’t yet found Earth-sized exoplanets that are close enough to study in depth.

Since early 2014, the telescope array has been gathering data almost every night, taking measurements of starlight every 25 minutes in search of telltale dips in brightness that may indicate a planet passing in front of a star.

“Our galaxy spans about 100,000 light-years,” Berta-Thompson says. “So this is definitely a very nearby solar neighborhood star.”

The robotic telescope immediately started observing GJ1132 at much faster 45-second intervals to confirm the measurement — a very slight dip of about 0.3 percent of the starlight. The researchers later pointed other telescopes in Chile at the star, and found that indeed, GJ 1132’s brightness dimmed by 0.3 percent every 1.6 days — a signal that a planet was regularly passing in front of the star.

“We didn’t know the planet’s period from one single event, but when we phased many of them together, this signal popped out,” Berta-Thompson says.

Based on the amount of starlight the planet blocks, and the radius of the star, scientists calculated that planet GJ 1132b is about 1.2 times the size of Earth. From measuring the wobble of its host star, they estimate the planet’s mass to be about 1.6 times that of Earth. Given its size and mass, they could determine its density — and they believe it to be rocky, like Earth. However, size and composition are where the comparisons to our planet end.

By calculating the size of and proximity to its star, the group came up with an estimate of the planet’s average temperature: a scorching 500 kelvins, or 440 F.

“The temperature of the planet is about as hot as your oven will go, so it’s like burnt-cookie hot,” Berta-Thompson says. “It’s too hot to be habitable — there’s no way there’s liquid water on the surface. But it is a lot cooler than the other rocky planets that we know of.”

That’s good in terms of scientific study: Most rocky exoplanets that have been discovered so far are essentially fireballs, with surface temperatures in the thousands of degrees — far too hot to hold onto any kind of atmosphere.

“This planet is cool enough that it can retain an atmosphere,” Berta-Thompson says. “So we think this planet probably still has something of a substantial atmosphere, in its current state.”

Berta-Thompson hopes that astronomers will use the James Webb Space Telescope (JWST), the much larger successor to the Hubble Space Telescope that is launching in 2018, to identify the color and the chemical makeup of the planet’s atmosphere, along with the pattern of its winds.

“We think it’s the first opportunity we have to point our telescopes at a rocky exoplanet and get that kind of detail, to be able to measure the color of its sunset, or the speed of its winds, and really learn how rocky planets work out there in the universe,” Berta-Thompson says. “Those will be exciting observations to make.”

The MIT-led NASA Transiting Exoplanet Survey Satellite (TESS) will search the entire sky for nearby planets, and may find many more that would serve as good targets for JWST.

“Of the billions of star systems in the Milky Way galaxy, about 500 are closer than GJ1132,” Berta-Thompson says. “TESS will find planets around some of these stars, and those planets will be valuable comparisons for understanding GJ1132b and rocky planets in general.”

Jonathan Fortney, a professor of astronomy and physics at the University of California at Santa Cruz, says the new planet is a good deal cooler than other nearby rocky planets that have been discovered so far. This means that GJ1132b likely has a substantial atmosphere.

“What is tremendously exciting to me is that this planet could be a real ‘cousin’ of Venus and Earth,” says Fortney, who was not involved in the research. “I think that this planet’s atmosphere, when we are able to try to determine what it is made of, will be an interesting data point in understanding the diversity in atmospheric composition for Earth-sized planets. In our solar system, we only have two data points: Earth and Venus. Before we can understand habitability, I think we need to understand the range of atmospheres that nature makes, and why.”

This research was supported, in part, by the MIT Torres Fellowship for Exoplanet Research, the Harvard-Smithsonian Center for Astrophysics, the National Science Foundation, the David and Lucile Packard Foundation, and the John Templeton Foundation.

An Earth-like planet 39 light-years away from Earth could provide researchers with an opportunity to study another planet’s atmosphere, reports Chukwuma Muanya for The Guardian. “Because it is so close, the air and clouds above GJ 1132b could be studied in detail using space and ground-based telescopes,” Muanya explains.

Jonathan Amos reports for BBC News on the discovery of a nearby exoplanet that is orbiting a red dwarf star. Amos explains that researchers are interested in studying Earth-sized exoplanets as “it may be their best bet of establishing whether or not life exists beyond our Solar System.”

Boston Globe reporter Felicia Gans writes that researchers have discovered an exoplanet 39 light-years away. “By studying this new world, I’m optimistic we’ll learn a little more about how planets work and bring us a little closer to that big exciting question of empirically figuring out whether life is out there in the galaxy,” says MIT postdoc Zachory Berta-Thompson.

The discovery of a new exoplanet will provide researchers an opportunity to explore the atmosphere of a galactic neighbor, reports Joshua Sokol for New Scientist. “There’s this huge forest out there of worlds like this one,” explains MIT postdoc Zachory Berta-Thompson. “But we’ve never had the opportunity to look at any one of those trees.”

Researchers have discovered a rocky, Earth-sized exoplanet that is close enough for astronomers to study its atmosphere, according to the Associated Press. “While the scientists say the planet is too hot for life, it's still much cooler than the rocky fireballs known to orbit stars beyond our solar system.”

Deborah Netburn of The Los Angeles Times reports on the discovery of an exoplanet 39 light-years away. "The discovery of this planet gives us the opportunity to switch our focus from imagining what is out there to testing our theories observationally,” says MIT postdoc Zachory Berta-Thompson.

Huffington Post reporter Nitya Rajan writes that the discovery of an Earth-sized exoplanet by MIT researchers could be an important step in the search for extraterrestrial life. The planet is “close enough for experts to better understand the different types of atmospheres that could support life.”

Washington Post reporter Joel Achenbach writes that researchers have discovered a new Earth-sized exoplanet. “It was very hard to find, and just barely at the limit of our detection, but it gives us finally a chance to really study a rocky planet around another star in an unprecedented level of detail,” explains MIT postdoc Zachory Berta-Thompson.