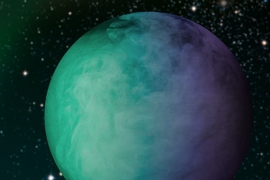 ↓ Download Image
Caption: Analysis of data from the Kepler space telescope has shown that roughly half of the dayside of the exoplanet Kepler-7b is covered by a large cloud mass. Statistical comparison of more than 1,000 atmospheric models show that these clouds are most likely made of Enstatite, a common Earth mineral that is in vapor form at the extreme temperature on Kepler-7b. These models varied the altitude, condensation, particle size, and chemical composition of the clouds to find the right reflectivity and color properties to match the observed signal from the exoplanet.

Caption:
Analysis of data from the Kepler space telescope has shown that roughly half of the dayside of the exoplanet Kepler-7b is covered by a large cloud mass. Statistical comparison of more than 1,000 atmospheric models show that these clouds are most likely made of Enstatite, a common Earth mineral that is in vapor form at the extreme temperature on Kepler-7b. These models varied the altitude, condensation, particle size, and chemical composition of the clouds to find the right reflectivity and color properties to match the observed signal from the exoplanet.
Credits:
Courtesy of NASA (edited by Jose-Luis Olivares/MIT)

Meteorologists sometimes struggle to accurately predict the weather here on Earth, but now we can find out how cloudy it is on planets outside our solar system, thanks to researchers at MIT.

In a paper to be published in the Astrophysical Journal, researchers in the Department of Earth, Atmospheric, and Planetary Sciences (EAPS) at MIT describe a technique that analyzes data from NASA’s Kepler space observatory to determine the types of clouds on planets that orbit other stars, known as exoplanets.

The team, led by Kerri Cahoy, an assistant professor of aeronautics and astronautics at MIT, has already used the method to determine the properties of clouds on the exoplanet Kepler-7b. The planet is known as a “hot Jupiter,” as temperatures in its atmosphere hover at around 1,700 kelvins.

NASA’s Kepler spacecraft was designed to search for Earth-like planets orbiting other stars. It was pointed at a fixed patch of space, constantly monitoring the brightness of 145,000 stars. An orbiting exoplanet crossing in front of one of these stars causes a temporary dimming of this brightness, allowing researchers to detect its presence.

Researchers have previously shown that by studying the variations in the amount of light coming from these star systems as a planet transits, or crosses in front or behind them, they can detect the presence of clouds in that planet’s atmosphere. That is because particles within the clouds will scatter different wavelengths of light.

To find out if this data could be used to determine the composition of these clouds, the MIT researchers studied the light signal from Kepler-7b. They used models of the temperature and pressure of the planet’s atmosphere to determine how different types of clouds would form within it, says lead author Matthew Webber, a graduate student in Cahoy’s group at MIT.

“We then used those cloud models to determine how light would reflect off the atmosphere of the planet [for each type of cloud], and tried to match these possibilities to the actual observations from the Kepler mission itself,” Webber says. “So we ran a large set of models, to see which models fit best statistically to the observations.”

By working backward in this way, they were able to match the Kepler spacecraft data to a type of cloud made out of vaporized silicates and magnesium. The extremely high temperatures in the Kepler-7b atmosphere mean that some minerals that commonly exist as rocks on Earth’s surface instead exist as vapors high up in the planet’s atmosphere. These mineral vapors form small cloud particles as they cool and condense.

Kepler-7b is a tidally locked planet, meaning it always shows the same face to its star — just as the moon does to Earth. As a result, around half of the planet’s day side — that which constantly faces the star — is covered by these magnesium silicate clouds, the team found.

“We are really doing nothing more complicated than putting a telescope into space and staring at a star with a camera,” Cahoy says. “Then we can use what we know about the universe, in terms of temperatures and pressures, how things mix, how they stratify in an atmosphere, to try to figure out what mix of things would be causing the observations that we’re seeing from these very basic instruments,” she says.

A clue on exoplanet atmospheres

Understanding the properties of the clouds on Kepler-7b, such as their mineral composition and average particle size, tells us a lot about the underlying physical nature of the planet’s atmosphere, says team member Nikole Lewis, a postdoc in EAPS. What’s more, the method could be used to study the properties of clouds on different types of planet, Lewis says: “It’s one of the few methods out there that can help you determine if a planet even has an atmosphere, for example.”

A planet’s cloud coverage and composition also has a significant impact on how much of the energy from its star it will reflect, which in turn affects its climate and ultimately its habitability, Lewis says. “So right now we are looking at these big gas-giant planets because they give us a stronger signal,” she says. “But the same methodology could be applied to smaller planets, to help us determine if a planet is habitable or not.”

The researchers hope to use the method to analyze data from NASA’s follow-up to the Kepler mission, known as K2, which began studying different patches of space last June. They also hope to use it on data from MIT’s planned Transiting Exoplanet Survey Satellite (TESS) mission, says Cahoy.

“TESS is the follow-up to Kepler, led by principal investigator George Ricker, a senior research scientist in the MIT Kavli Institute for Astrophysics and Space Research. It will essentially be taking similar measurements to Kepler, but of different types of stars,” Cahoy says. “Kepler was tasked with staring at one group of stars, but there are a lot of stars, and TESS is going to be sampling the brightest stars across the whole sky,” she says.

This paper is the first to take circulation models including clouds and compare them with the observed distribution of clouds on Kepler-7b, says Heather Knutson, an assistant professor of planetary science at Caltech who was not involved in the research.

“Their models indicate that the clouds on this planet are most likely made from liquid rock,” Knutson says. “This may sound exotic, but this planet is a roasting hot gas-giant planet orbiting very close to its host star, and we should expect that it might look quite different than our own Jupiter.”