Method will help scientists determine the mass of exoplanets that are not measurable in any other way.
Watch Video
Jennifer Chu, MIT News Office
Publication Date:
Press Inquiries 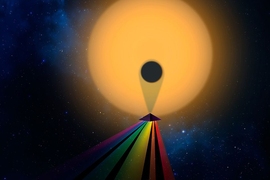 To date, scientists have confirmed the existence of more than 900 exoplanets circulating outside our solar system. To determine if any of these far-off worlds are habitable requires knowing an exoplanet’s mass — which can help tell scientists whether the planet is made of gas or rock and other life-supporting materials.

But current techniques for estimating exoplanetary mass are limited. Radial velocity is the main method scientists use: tiny wobbles in a star’s orbit as it is tugged around by the planet’s gravitational force, from which scientists can derive the planet-to-star mass ratio. For very large, Neptune-sized planets, or smaller Earth-sized planets orbiting very close to bright stars, radial velocity works relatively well. But the technique is less successful with smaller planets that orbit much farther from their stars, as Earth does.

Now scientists at MIT have developed a new technique for determining the mass of exoplanets, using only their transit signal — dips in light as a planet passes in front of its star. This data has traditionally been used to determine a planet’s size and atmospheric properties, but the MIT team has found a way to interpret it such that it also reveals the planet’s mass.

“With this method, we realized the planetary mass — a key parameter that, if missing, could have prevented us from assessing the habitability of the first potentially habitable Earth-sized planet in the next decade — will actually be accessible, together with its atmospheric properties,” says Julien de Wit, a graduate student in MIT’s Department of Earth, Atmospheric and Planetary Sciences.

De Wit is lead author on a paper published today in the journal Science, with co-author Sara Seager, the Class of 1941 Professor of Physics and Planetary Science.

In addition to a planet’s composition, its mass can provide a glimpse of the planet’s surface and internal activity.

“The mass affects everything on a planetary level, such as any plate tectonics, its internal cooling and convection, how it generates magnetic fields, and whether gas escapes from its atmosphere,” de Wit says. “If you don’t get it, there is a large part of the planet’s properties that remains undetermined.”

Using large telescopes such as the NASA’s Spitzer or Hubble space telescopes, scientists have been able to analyze the transmission spectra of newly discovered exoplanets. A transmission spectrum is generated as a planet passes in front of its star, letting some light through its atmosphere. By analyzing the wavelengths of light that pass through, scientists can determine a planet’s atmospheric properties, such as its temperature and the density of atmospheric molecules. From the total amount of light blocked, they can calculate a planet’s size.

But to get an accurate measurement of a planet’s mass, de Wit had to prove that these three parameters could be obtained independently of each other, solely from a transmission spectrum.

To prove that a planet’s temperature, pressure profile, and atmospheric density may be derived independently from a transmission spectrum, de Wit had to demonstrate that each parameter has a distinctive effect on a transmission spectrum. De Wit performed new analytical derivations from the first principles of radiative transfer, and found that an 18th-century mathematical constant called the Euler-Mascheroni constant helps to reveal the individual effects of each parameter. In other words, this constant acted as an “encryption key” to decode the process by which the properties of a planet’s atmosphere are embedded in its transmission spectrum.

“It really helps you unlock everything and reveal, out of these crazy equations, which atmospheric properties do what, and how,” de Wit says. “You find this constant in a lot of physical problems, and it’s fun to see it reappearing in planetary science.”

To test the method, de Wit applied the technique to a recently discovered exoplanet, known as 189733b, that is located 63 light-years away. From his calculations, de Wit came up with the same mass measurement as that obtained by others using radial velocity.

Using the specifications of future high-resolution space telescopes, such as the James Webb Space Telescope — an instrument designed to study exoplanetary atmospheres — the authors showed that the new technique will be able to characterize the mass and atmospheric properties of smaller, Earth-sized planets.

Mark Swain, a research scientist at NASA’s Jet Propulsion Laboratory, says the group’s new technique will be very helpful in determining the composition, and ultimately the habitability, of Earth-like planets.

“Knowing the mass is a very important piece of the puzzle,” says Swain, who was not involved in the research. “If you found the composition of the planet was almost certainly solid, that required a significant amount of water mixed in with a silicate core, and you knew it had habitable zone-type temperatures, you might make a good case for in-depth studies of that world, because it has what seems like the ingredients for a habitable planet.”