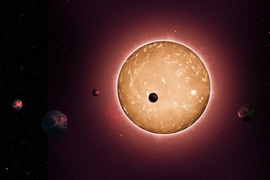 ↓ Download Image
Caption: The system Kepler-444 formed when the Milky Way galaxy was a youthful two billion years old. The planets were detected from the dimming that occurs when they transit the disc of their parent star, as shown in this artist's conception.
Credits: Image courtesy of NASA

Caption:
The system Kepler-444 formed when the Milky Way galaxy was a youthful two billion years old. The planets were detected from the dimming that occurs when they transit the disc of their parent star, as shown in this artist's conception.
Credits:
Image courtesy of NASA

Viewed from above, our solar system’s planetary orbits around the sun resemble rings around a bulls-eye. Each planet, including Earth, keeps to a roughly circular path, always maintaining the same distance from the sun.

For decades, astronomers have wondered whether the solar system’s circular orbits might be a rarity in our universe. Now a new analysis suggests that such orbital regularity is instead the norm, at least for systems with planets as small as Earth.

In a paper published in the Astrophysical Journal, researchers from MIT and Aarhus University in Denmark report that 74 exoplanets, located hundreds of light-years away, orbit their respective stars in circular patterns, much like the planets of our solar system.

These 74 exoplanets, which orbit 28 stars, are about the size of Earth, and their circular trajectories stand in stark contrast to those of more massive exoplanets, some of which come extremely close to their stars before hurtling far out in highly eccentric, elongated orbits.

“Twenty years ago, we only knew about our solar system, and everything was circular and so everyone expected circular orbits everywhere,” says Vincent Van Eylen, a visiting graduate student in MIT’s Department of Physics. “Then we started finding giant exoplanets, and we found suddenly a whole range of eccentricities, so there was an open question about whether this would also hold for smaller planets. We find that for small planets, circular is probably the norm.”

Ultimately, Van Eylen says that’s good news in the search for life elsewhere. Among other requirements, for a planet to be habitable, it would have to be about the size of Earth — small and compact enough to be made of rock, not gas. If a small planet also maintained a circular orbit, it would be even more hospitable to life, as it would support a stable climate year-round. (In contrast, a planet with a more eccentric orbit might experience dramatic swings in climate as it orbited close in, then far out from its star.)

“If eccentric orbits are common for habitable planets, that would be quite a worry for life, because they would have such a large range of climate properties,” Van Eylen says. “But what we find is, probably we don’t have to worry too much because circular cases are fairly common.”

In the past, researchers have calculated the orbital eccentricities of large, “gas giant” exoplanets using radial velocity — a technique that measures a star’s movement. As a planet orbits a star, its gravitational force will tug on the star, causing it to move in a pattern that reflects the planet’s orbit. However, the technique is most successful for larger planets, as they exert enough gravitational pull to influence their stars.

Researchers commonly find smaller planets by using a transit-detecting method, in which they study the light given off by a star, in search of dips in starlight that signify when a planet crosses, or “transits,” in front of that star, momentarily diminishing its light. Ordinarily, this method only illuminates a planet’s existence, not its orbit. But Van Eylen and his colleague Simon Albrecht, of Aarhus University, devised a way to glean orbital information from stellar transit data.

They first reasoned that if they knew the mass of a planet’s star, they could calculate how long a planet would take to orbit that star, if its orbit were circular. The mass of a star determines its gravitational pull, which in turn influences how fast a planet travels around the star.

By calculating a planet’s orbital velocity in a circular orbit, they could then estimate a transit’s duration — how long a planet would take to cross in front of a star. If the calculated transit matched an actual transit, the researchers reasoned that the planet’s orbit must be circular. If the transit were longer or shorter, the orbit must be more elongated, or eccentric.

To obtain actual transit data, the team looked through data collected over the past four years by NASA’s Kepler telescope — a space observatory that surveys a slice of the sky in search of habitable planets. The telescope has monitored the brightness of over 145,000 stars, only a fraction of which have been characterized in any detail.

The team chose to concentrate on 28 stars for which mass and radius have previously been measured, using asteroseismology — a technique that measures stellar pulsations, which reflect a star’s mass and radius.

These 28 stars host multiplanet systems — 74 exoplanets in all. The researchers obtained Kepler data for each exoplanet, looking not only for the occurrence of transits, but also their duration. Given the mass and radius of the host stars, the team calculated each planet’s transit duration if its orbit were circular, then compared the estimated transit durations with actual transit durations from Kepler data.

Across the board, Van Eylen and Albrecht found the calculated and actual transit durations matched, suggesting that all 74 exoplanets maintain circular, not eccentric, orbits.

“We found that most of them matched pretty closely, which means they’re pretty close to being circular,” Van Eylen says. “We are very certain that if very high eccentricities were common, we would’ve seen that, which we don’t.”

Van Eylen says the orbital results for these smaller planets may eventually help to explain why larger planets have more extreme orbits.

“We want to understand why some exoplanets have extremely eccentric orbits, while in other cases, such as the solar system, planets orbit mostly circularly,” Van Eylen says. “This is one of the first times we’ve reliably measured the eccentricities of small planets, and it’s exciting to see they are different from the giant planets, but similar to the solar system.”

David Kipping, an astronomer at the Harvard-Smithsonian Center for Astrophysics, notes that Van Eylen’s sample of 74 exoplanets is a relatively small slice, considering the hundreds of thousands of stars in the sky.

“I think that the evidence for smaller planets having more circular orbits is presently tentative,” says Kipping, who was not involved in the research. “It prompts us to investigate this question in more detail and see whether this is indeed a universal trend, or a feature of the small sample considered.”

In regard to our own solar system, Kipping speculates that with a larger sample of planetary systems, “one might investigate eccentricity as a function of multiplicity, and see whether the solar system's eight planets are typical or not.”

This research was funded in part by the European Research Council.

Waking up to a new year