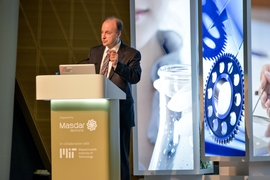 ↓ Download Image
Caption: Vladimir Bulovic, MIT professor of engineering, speaks on emerging nanotechnologies at the recent Masdar Institute and MIT Research and Innovation Conference in Abu Dhabi. Bulovic and other faculty members from both institutions provided updates on joint projects and other research.
Credits: Photo courtesy of Masdar Institute

Caption:
Vladimir Bulovic, MIT professor of engineering, speaks on emerging nanotechnologies at the recent Masdar Institute and MIT Research and Innovation Conference in Abu Dhabi. Bulovic and other faculty members from both institutions provided updates on joint projects and other research.
Credits:
Photo courtesy of Masdar Institute

Mention the economy of the United Arab Emirates to people from outside the region, and the first word that may come to their minds is “oil.” But today, the UAE is striving to change that initial response to “innovation.”

As part of a longstanding effort to diversify its economy, the UAE is today focusing on initiatives in a variety of other areas — for instance, finding ways to quench the Gulf nation’s growing thirst for fresh water and develop alternative energy sources. Several MIT faculty members are contributing to those efforts through collaborative long-distance research initiatives with their counterparts at Masdar Institute, a graduate-level technology university in the UAE’s capital city, Abu Dhabi.

“This is one of MIT’s largest, longest-standing, and most important international initiatives,” says Duane Boning, a professor of electrical engineering and computer science and director of the Cambridge-based MIT and Masdar Institute Cooperative Program, which helped the UAE launch the university in 2007 and has supported its research and academic programs ever since.

The collaborations have fostered a cross-disciplinary community of researchers at the two institutions and served as valuable teaching tools, says Cooney, who has been involved with the collaborative program since its inception. “It’s an opportunity to show students and postdocs how to do interdisciplinary collaborative research,” Cooney says. “It’s a powerful model.”

The first four MMIP projects include a low-cost water-monitoring device for sensing blooms of potentially toxic algae; a wastewater filtration and treatment system; a high-efficiency membrane-based approach to desalination; and an energy-efficient transmitter for wireless communication. The MMIP grants are sponsored by the Cooperative Program and administered by MIT’s Deshpande Center for Technological Innovation in cooperation with the Institute Center for Innovation and Entrepreneurship at Masdar Institute.

Investigators from the nine flagship research projects and the four current MMIP projects shared updates at the recent Masdar Institute and MIT Research and Innovation Conference in Abu Dhabi. More than 200 people — including 32 MIT faculty, staff, and students, the largest such MIT delegation ever to visit Masdar Institute — attended the one-day event.

The turnout “is a very, very good indication of the commitment that both institutions have to working hand-in-hand and promoting the interests of the UAE and Abu Dhabi,” Masdar Institute President Fred Moavenzadeh said in his opening remarks. (Moavenzadeh, the James Mason Crafts Professor in MIT’s Engineering Systems Division and in the Department of Civil and Environmental Engineering, has been on leave to head Masdar Institute since 2010.)

The UAE: Planning for transformation

The UAE, created in 1971 by the union of seven emirates, or principalities, has historically relied on an economy dominated by the oil industry — and hasn’t traditionally emphasized research and development. But this is changing rapidly.

In recent years, the UAE’s leaders have charted a course for a post-oil world with a knowledge-based economy that emphasizes innovation and global leadership in sustainable energy. (Those efforts also reflect the vision of the UAE’s founding leader, the late H.E. Sheikh Zayed bin Sultan Al Nahyan, who, during his 33-year tenure as UAE president, often cited education, economic diversification, and environmental protection as priorities for the nation’s future.) Last year, the UAE declared 2015 “the Year of Innovation” and launched a strategic initiative to make the small country one of the world’s most innovative nations by 2021 — an ambitious goal for a 43-year-old nation with a population of less than 10 million.

Masdar Institute, with its graduate-level programs and tight focus on science and technology — and, of course, its MIT affiliation — is a critical component in the UAE’s innovation strategy.

But he and other Masdar Institute officials emphasize that the relationship is mutually beneficial, with the UAE’s unique environment and available capital creating plenty of research opportunities for MIT faculty. Most of the joint research projects focus on solving some of the region’s — and the world’s — most pressing problems, especially meeting demand for fresh water and finding new sources of clean and renewable energy. Following are snapshots of just two such projects.

Desalinating water: The UAE’s consumption of fresh water far exceeds what is naturally available in its hot desert climate. As a coastal nation, the UAE relies heavily on desalination to meet its water needs, removing salt and minerals from seawater to render it potable. But traditional thermal desalination processes are costly and have a big carbon footprint, says John Lienhard, the Abdul Latif Jameel Professor of Water and Food in MIT’s Department of Mechanical Engineering.

Together with Hassan Arafat, an associate professor of chemical engineering at Masdar Institute, Lienhard has been developing an advanced, highly efficient membrane-based distillation system. The two investigators believe the system — which also has potential applications for wastewater treatment — will lead to far more efficient desalination at lower cost and with reduced environmental impact.

Harnessing solar energy: One of Masdar Institute’s most distinctive landmarks is its 66-foot Beam Down Tower, which investigators are using for research on concentrated solar power. The tower’s 33 heliostats, or mirrors, are designed to follow the sun’s path throughout the day, focusing light downward to achieve intense heat that, in turn, can boil water to create steam, and ultimately generate electricity using an electric turbine.

“We want to store the heat for later use” — for example, during cloudy periods, or at night, says Nicolas Calvet, an assistant professor of mechanical and materials engineering at Masdar Institute who’s working with Alexander Slocum, the Neil and Jane Pappalardo Professor of Mechanical Engineering at MIT. The advantages of effective TES: higher efficiency, lower cost, and an energy supply that’s unaffected by the weather or time of day.

Overall, the ongoing research projects are “giving us a glimpse of the future, of where we’re heading together,” Boning says. “Fortunately, the future looks really bright.”

Boning to serve as director of the MIT Masdar Program