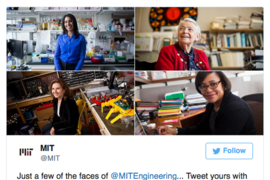 Isis Wenger was told she didn’t look like an engineer. It wasn’t the first time it had happened, but this time it was all over the Internet. After being featured in a recruitment ad for her company, OneLogin, the software engineer faced a barrage of Internet comments doubtful of her engineering skills because of her looks.

“I’ve witnessed it many times, both for myself and for others,” says May-Li Khoe ’99, MEng ’00. “Women are mistaken for being much more junior than they are, and are often taken less seriously in many roles and academic fields.”

Tired of people not believing in her abilities because of her appearance, Wenger fought back by launching the social media hashtag #ILookLikeanEngineer. The term is growing increasingly popular as thousands of engineers posted photos of themselves along with the hashtag to show the diversity that exists in the engineering world.

#ILookLikeAnEngineer and I studied #SICP in Scheme @MIT @MITEngineering thanks to HyperCard for inspiring me to code pic.twitter.com/NPbaDuEiWD

“When people expect an engineer to look or act a particular way, usually subconsciously, it creates cognitive dissonance for them to receive the same information or work from somebody who doesn’t. As a result, it’s natural for them to take input less seriously from somebody who doesn’t fit the mold. I felt compelled to respond because I wanted to help make us, women (and other people from underrepresented groups in tech) who are or were engineers, visible — to help overthrow the stereotype.” –May-Li Khoe ’99, MEng ’00

I have EE bachelor's & master's degrees from @MIT and I designed missile and radar systems #ILookLikeAnEngineer pic.twitter.com/k3Ht8qfJNZ

“I was in the defense industry for four years, and even though I was often the only female in the room and half the age of everyone else, I was always respected and treated well. The 'discrimination' really came from outside of the work office. People used to ask me what I do, and I would say that I was a rocket scientist, because I did missile integration and radar algorithm design. Half the time, men thought I was joking and didn’t believe me. The other half of the time, they walked away, because they were too intimidated to talk to me.” –Sharmeen Browarek ’07, MEng ’10

recent MIT grad w/ a BS in comp sci & is starting my career at Tumblr as a web dev engineer & #ILookLikeAnEngineer pic.twitter.com/Tg8mTjZadb

“I constantly get told that I don’t look like a typical engineer. I first heard about the hashtag when I logged onto Twitter and saw other women who looked like me adding to the hashtag. Although there were plenty of women in Course 6 [Electrical Engineering and Computer Science] during my time at MIT, I was still one of the very few black women in the major. So in order to encourage other girls like me to pursue or to continue on the same career path as me, I decided I wanted to participate in the hashtag.” –Michelle Johnson ’15

I have two engineering degrees from MIT and now help "to increase the number" as #NSBE ED #ILookLikeAnEngineer pic.twitter.com/PqzF8yVuN1

“Earlier this year, the National Society of Black Engineers established a new vision statement: 'We envision a world in which engineering is a mainstream word in homes and communities of color, and all Black students can envision themselves as engineers.' I felt that this masterful Twitter campaign was a vehicle for fulfilling our vision — to literally help change the face of engineering.” –Karl Reid ’84, SM ’85, executive director of the National Society of Black Engineers

I am a computational scientist at MIT and #ILookLikeAnEngineer :-) pic.twitter.com/F6nGI5GdxL

“Movements like these are so important. It’s so motivating to see all the faces of engineering. You may have a bias towards what an engineer should look like but hopefully these campaigns slowly chip away at that view.” –Kimberly Gonzales ’11

Do you look like an engineer? Send a tweet using the hashtag #ILookLikeanEngineer and tag @MIT_alumni and/or @MIT in your photo. To see a collection of tweets, Instagrams and other social posts from the MIT community, visit MIT on Storify.

Stephanie McFeeters writes for The Boston Globe about the social media campaign #ILookLikeAnEngineer, highlighting the MIT students, faculty and alumni who participated in the trend by posting their photos. The campaign stemmed from the negative response one female engineer received after appearing in an ad campaign for her IT company.

Social media at MIT: The Alumni Association reaches out and follows