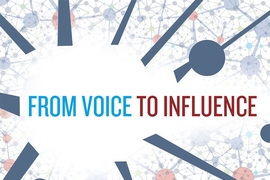 ↓ Download Image
Caption: The cover of "From Voice to Influence" (University of Chicago Press), by Danielle Allen and Jennifer Light. 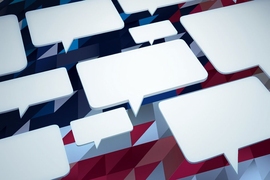 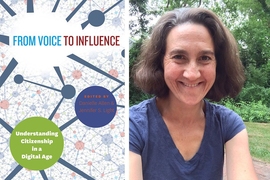 ↓ Download Image
Caption: The cover of "From Voice to Influence" (University of Chicago Press), by Danielle Allen and Jennifer Light (pictured). 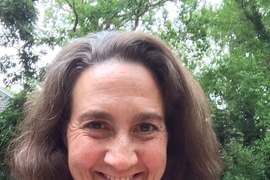 Caption:
The cover of "From Voice to Influence" (University of Chicago Press), by Danielle Allen and Jennifer Light (pictured).

New forms of digital media have made it easier for citizens to donate to politicians, start petitions, watch video of campaign-trail gaffes — and of course, offer their own opinions to a large audience. Are these fundamental changes to our political practices, or just modifications that leave an older form of politics intact? Professor Jennifer Light, a historian of technology in MIT’s Program in Science, Technology, and Society (STS) and Department of Urban Studies and Planning, explores this issue in a new book she has co-edited, “From Voice to Influence: Understanding Citizenship in a Digital Age,” just published by the University of Chicago Press. The volume contains contributions from a wide range of prominent scholars — including philosopher Tommie Shelby, psychologist Howard Gardner, and MIT scholar of digital media Ethan Zuckerman — as well as Light and her co-editor, Harvard University political theorist Danielle Allen. MIT News recently spoke with Light about the book.

Q. You’ve assembled a large group of scholars to write about digital technology and citizenship, with an emphasis on youth participation in politics. What motivated this collaboration?

A. We were motivated by the belief that scholars’ traditional toolkit of concepts like the public sphere and citizenship might not be sufficient for describing contemporary political life. Social scientists looking at political participation, for example, have traditionally focused on voting and membership in formal political organizations — useful measures to be sure, but ones that do not capture the richness of what is happening online and with social media.

Youth provide a very useful lens for exploring some of these theoretical questions. Youth are traditionally not members of formal political organizations. They don’t vote, either because they are not eligible or are less interested than older citizens. And they’re typically the fastest adopters of technologies. So whatever they’re doing now may be the shape of politics in the future. So looking at youth freed us from some assumptions about how politics happens, and gave us insights into possible future norms as well.

Q. Your own essay, forming the first chapter of this book, says there is a long history of youth using new media to participate in politics. When have we previously seen this?

A. There is so much excitement right now about what contemporary media are doing to politics — helping a range of disenfranchised groups to have their voices heard, changing the terms of political discussion, and sometimes changing policy as well. The attention devoted to Title IX issues on many college campuses is one example.

Stepping back to think about the present as part of the sweep of history, though, the issues in play look quite different. When a new technology arrives, there are many opportunities for people who are not part of the power structure to use it for political activism. Young people have made political media for more than a century. They used the toy press in the 1870s, wireless [radio] in the early 1900s and then video and public-access cable television in the 1960s and 1970s. But the short-term impacts of technologies are often not the same as their long-term consequences, because traditional gatekeepers find a way to reassert their authority and restrict technologies’ alternative uses.

My essay is a way of saying that our conversations about new media and politics are proceeding in a manner that’s technologically determinist, assuming political change will follow from technological change, when in fact, the political changes are contingent on how we regulate the technology, how much it costs, and all sorts of other complicated questions. The history of technology invites us to see how larger forces shape technologies’ ultimate impacts and to expand our conversations accordingly.

Q. Are people any more excited about the promise of technology — or the potential of young voters to produce changes — right now, compared with these past time periods?

A. If you gave me time I would pull out quotes from 1903 about wireless communication that sound like comments on new media today. Undergraduates find these similarities fascinating and I believe this sort of history can help to train better scientists and engineers. When students have the historical distance to compare technologies’ short- and long-term effects, to contrast fantasy with reality — they see how more than just better technology is needed for innovations to have particular social or political outcomes.

As for the excitement around young peoples’ political engagement today, that’s a particularly interesting issue to consider in historical perspective. The ways that Americans have thought about young people and their political, economic, and social roles have changed tremendously over the last 150 years. For example, in the 1870s, when kids were starting up amateur press associations, young people were working in mills and factories and were important economic contributors to families. Young people were in many ways more like grown-ups than the youth of today. They didn’t vote, but they were very involved in labor activism, and even worked in some civil service jobs. Between the late century and the 1930s, American adults decided that young people should lead more sheltered lives, going to school rather than participating in the labor force and public life. Today’s excitement about youth political engagement is a response to these changed expectations. Since we don’t expect young people to be involved in politics, we are surprised to find they have so much to say.