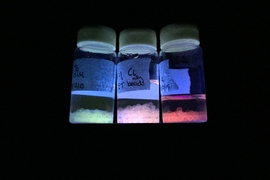 ↓ Download Image
Caption: Luminescent materials produced by the MIT team are shown under ultraviolet light, emitting different colors of light that can be modified by their environmental conditions.
Credits: Photo: Tara Fadenrecht 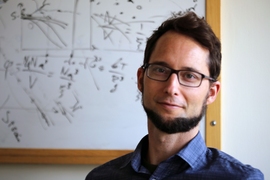 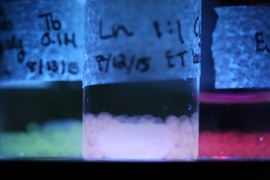 ↓ Download Image
Caption: Luminescent materials produced by the MIT team are shown under ultraviolet light, emitting different colors of light that can be modified by their environmental conditions.
Credits: Photo: Tara Fadenrecht

Caption:
Luminescent materials produced by the MIT team are shown under ultraviolet light, emitting different colors of light that can be modified by their environmental conditions. These light-emitting beads were made by materials science and engineering students Caroline Liu and Rebecca Gallivan.
Credits:
Photo: Tara Fadenrecht

Caption:
Luminescent materials produced by the MIT team are shown under ultraviolet light, emitting different colors of light that can be modified by their environmental conditions. These light-emitting beads were made by materials science and engineering students Caroline Liu and Rebecca Gallivan.
Credits:
Photo: Tara Fadenrecht

Researchers at MIT have developed a family of materials that can emit light of precisely controlled colors — even pure white light — and whose output can be tuned to respond to a wide variety of external conditions. The materials could find a variety of uses in detecting chemical and biological compounds, or mechanical and thermal conditions.

The material, a metallic polymer gel made using rare-earth elements, is described in a paper in the Journal of the American Chemical Society by assistant professor of materials science and engineering Niels Holten-Andersen, postdoc Pangkuan Chen, and graduate students Qiaochu Li and Scott Grindy.

The material, a light-emitting lanthanide metallogel, can be chemically tuned to emit light in response to chemical, mechanical, or thermal stimuli — potentially providing a visible output to indicate the presence of a particular substance or condition.

The new material is an example of work with biologically inspired materials, Holten-Andersen explains. “My niche is biomimetics — using nature’s tricks to design bio-inspired polymers,” he says. There are an amazing variety of “really funky” organisms in the oceans, he says, adding: “We’ve barely scratched the surface of trying to understand how they’re put together, from a chemical and mechanical standpoint.”

Studying such natural materials, evolved over millions of years to adapt to challenging environmental conditions, “allows us as engineers to derive design principles” that can be applied to other kinds of materials, he adds.

Holten-Andersen’s own research has examined a particular kind of crosslinking in the threads mussels use to anchor themselves to rocks, called metal-coordination bonds. These bonds, he adds, also play an important role in many biological functions, such as binding oxygen to hemoglobin in red blood cells.

He emphasizes that the idea is not to copy nature, but to understand and apply some of the underlying principles of natural materials; in some cases, these principles can be applied in materials that are simpler in structure and easier to produce than their natural counterparts.

In this case, the use of a metal from the lanthanide group, also known as rare-earth elements, combined with a widely used polymer called polyethylene glycol, or PEG, results in a material that produces tunable, multicolored light emissions. The light emission can then reflect very subtle changes in the environment, providing a color-coded output that reveals details of those conditions.

So, for example, the materials could be engineered to detect specific pollutants, toxins, or pathogens, with the results instantly visible just through color emission.

The materials can also detect mechanical changes, and could be used to detect stresses in mechanical systems, Holten-Andersen says. For example, it’s difficult to measure forces in fluids, he says, but this approach could provide a sensitive means of doing so.

The material can be made in a gel, a thin film, or a coating that could be applied to structures, potentially indicating the development of a failure before it happens.

Metal-coordination bonds in polymers have been the subject of other work by Holten-Andersen: In a separate paper he published Aug. 31 in the journal Nature Materials, he reported making polymers with tunable mechanical properties, including stiffness. These materials are naturally self-assembling and self-healing, he says, and could be useful as energy-absorbing materials or in biological implants that need to be able to absorb impacts without breaking, he says.

“What’s nice here is that the materials change color in response to such a wide and rich set of stimuli,” says Stephen Craig, a professor of chemistry at Duke University who was not involved in this research. He adds, “The fact that the reference state can be made white is quite useful; it’s often easier to detect by eye that something has a faint shade of green, for example, than that it is one shade of green as opposed to another.”

Craig sees a variety of potential uses for such materials. “I can imagine using these or similar materials as in situ monitors of a wide range of conditions,” he says, adding that practical deployment of the technology could be facilitated by the fact that “the core hydrogel scaffold used here is so prevalent in studies of both biological and fundamental polymer physics questions.”

This work was supported by the MIT Energy Initiative and the MIT Sea Grant via the Doherty Professorship in Ocean Utilization.

“A team of researchers from MIT has created sensitive metallic polymers that change color in response to chemical or physical variations in their surroundings,” writes Alexandra Ossola for Popular Science. “The gel could be used as a litmus test to detect if particular pollutants are present in an environment.”