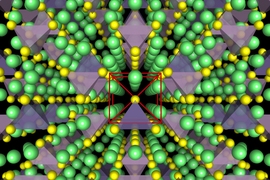 ↓ Download Image
Caption: Illustrations show the crystal structure of a superionic conductor. The backbone of the material is a body-centred cubic-like arrangement of sulphur anions. Lithium atoms are depicted in green, sulfur atoms in yellow, PS4 tetrahedra in purple, and GeS4 tetrahedra in blue. Researchers have revealed the fundamental relationship between anion packing and ionic transport in fast lithium-conducting materials.
Credits: Image: Yan Wang

Caption:
Illustrations show the crystal structure of a superionic conductor. The backbone of the material is a body-centred cubic-like arrangement of sulphur anions. Lithium atoms are depicted in green, sulfur atoms in yellow, PS4 tetrahedra in purple, and GeS4 tetrahedra in blue. Researchers have revealed the fundamental relationship between anion packing and ionic transport in fast lithium-conducting materials.
Credits:
Image: Yan Wang

If you pry open one of today’s ubiquitous high-tech devices — whether a cellphone, a laptop, or an electric car — you’ll find that batteries take up most of the space inside. Indeed, the recent evolution of batteries has made it possible to pack ample power in small places.

But people still always want their devices to last even longer, or go further on a charge, so researchers work night and day to boost the power a given size battery can hold. Rare, but widely publicized, incidents of overheating or combustion in lithium-ion batteries have also highlighted the importance of safety in battery technology.

Now researchers at MIT and Samsung, and in California and Maryland, have developed a new approach to one of the three basic components of batteries, the electrolyte. The new findings are based on the idea that a solid electrolyte, rather than the liquid used in today’s most common rechargeables, could greatly improve both device lifetime and safety — while providing a significant boost in the amount of power stored in a given space.

The results are reported in the journal Nature Materials in a paper by MIT postdoc Yan Wang, visiting professor of materials science and engineering Gerbrand Ceder, and five others. They describe a new approach to the development of solid-state electrolytes that could simultaneously address the greatest challenges associated with improving lithium-ion batteries, the technology now used in everything from cellphones to electric cars.

The electrolyte in such batteries — typically a liquid organic solvent whose function is to transport charged particles from one of a battery’s two electrodes to the other during charging and discharging — has been responsible for the overheating and fires that, for example, resulted in a temporary grounding of all of Boeing’s 787 Dreamliner jets, Ceder explains. Others have attempted to find a solid replacement for the liquid electrolyte, but this group is the first to show that this can be done in a formulation that fully meets the needs of battery applications.

Solid-state electrolytes could be “a real game-changer,” Ceder says, creating “almost a perfect battery, solving most of the remaining issues” in battery lifetime, safety, and cost.

Costs have already been coming down steadily, he says. But as for safety, replacing the electrolyte would be the key, Ceder adds: “All of the fires you’ve seen, with Boeing, Tesla, and others, they are all electrolyte fires. The lithium itself is not flammable in the state it’s in in these batteries. [With a solid electrolyte] there’s no safety problem — you could throw it against the wall, drive a nail through it — there’s nothing there to burn.”

The proposed solid electrolyte also holds other advantages, he says: “With a solid-state electrolyte, there’s virtually no degradation reactions left” — meaning such batteries could last through “hundreds of thousands of cycles.”

The key to making this feasible, Ceder says, was finding solid materials that could conduct ions fast enough to be useful in a battery.

“There was a view that solids cannot conduct fast enough,” he says. “That paradigm has been overthrown.”

The research team was able to analyze the factors that make for efficient ion conduction in solids, and home in on compounds that showed the right characteristics. The initial findings focused on a class of materials known as superionic lithium-ion conductors, which are compounds of lithium, germanium, phosphorus, and sulfur, but the principles derived from this research could lead to even more effective materials, the team says.

The research that led to a workable solid-state electrolyte was part of an ongoing partnership with the Korean electronics company Samsung, through the Samsung Advanced Institute of Technology in Cambridge, Massachusetts, Ceder says. That alliance also has led to important advances in the use of quantum-dot materials to create highly efficient solar cells and sodium batteries, he adds.

This solid-state electrolyte has other, unexpected side benefits: While conventional lithium-ion batteries do not perform well in extreme cold, and need to be preheated at temperatures below roughly minus 20 degrees Fahrenheit, the solid-electrolyte versions can still function at those frigid temperatures, Ceder says.

The solid-state electrolyte also allows for greater power density — the amount of power that can be stored in a given amount of space. Such batteries provide a 20 to 30 percent improvement in power density — with a corresponding increase in how long a battery of a given size could power a phone, a computer, or a car.

"The quality of this work is top-tier,” says Ying Shirley Meng, an associate professor of nanoengineering at the University of California at San Diego, who was not involved in this work. “The team has a long, outstanding track record in computational materials science, and they succeeded again in providing the battery and materials communities new scientific insights to push the fields forward.”

Meng adds that this study "provides some very significant design principles for designing and optimizing new solid state electrolyte (SSE) materials. Now the experimentalists can explore the new phase space with this guidance and speed up SSE discovery. It is very exciting.”

The team also included MIT graduate student William Richards and postdoc Jae Chul Kim; Shyue Ping Ong at the University of California at San Diego; Yifei Mo at the University of Maryland; and Lincoln Miara at Samsung. The work is part of an alliance between MIT and the Samsung Advanced Institute of Technology focusing on the development of materials for clean energy.

In an article for CNN Money about developments in battery technology, Jackie Wattles highlights a new approach developed by MIT researchers that could help pave the way for solid-state lithium-ion batteries. Wattles explains that such technology could “survive hundreds of thousands of charges, store 20% to 30% more power, and isn't as susceptible to overheating.”