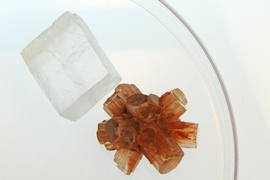 ↓ Download Image
Caption: Two different forms of calcium carbonate have identical chemical composition, but look different and have different properties such as solubility. The flat, clear crystal is calcite, the pinkish multifaceted one is aragonite.

Caption:
Two different forms of calcium carbonate have identical chemical composition, but look different and have different properties such as solubility. The flat, clear crystal is calcite, the pinkish multifaceted one is aragonite.
Credits:
Photo courtesy of Felice Frankel

For almost a century, scientists have been puzzled by a process that is crucial to much of the life in Earth’s oceans: Why does calcium carbonate, the tough material of seashells and corals, sometimes take the form of calcite, and at other times form a chemically identical form of the mineral, called aragonite, that is more soluble — and therefore more vulnerable to ocean acidification?

Researchers had previously identified variations in the concentration of magnesium in the water as a key factor in that process, but had never been able to explain why that produced such a dramatic effect. Now scientists at MIT and Lawrence Berkeley National Laboratory (LBNL) have carried out a detailed, atomic-level analysis of the process. The new explanation, they say, could be a step toward enabling the directed synthesis of new materials on demand in the lab.

The findings are published this week in the Proceedings of the National Academy of Science by graduate student Wenhao Sun; Gerbrand Ceder, the Richard P. Simmons Professor in Metallurgy at MIT; and three others.

“The big-picture problem is about materials formation,” Sun explains. “When solids crystallize in solution, you expect them to make the lowest-energy, [most] stable crystal structure.”

Many materials perform better when they are metastable: stable under ordinary conditions, but subject to transformation to a more stable state over time. For example, metastable forms are more soluble, which can be beneficial for pharmaceuticals because it means they can more easily be taken up by the body. Other technologies, such as battery materials and water-splitting photocatalysts, require long-term stability and therefore do better as the stable phase.

Sun explains that the team chose to explore metastability using calcium carbonate because many decades of good experimental data are available, making it a good case for study of why some chemical reactions preferentially produce one of several possible forms of a compound.

Calcium carbonate can take the form of two different minerals: Calcite is the stable form, whereas aragonite is metastable: Over time, or when heated, it can ultimately transform into calcite. Another familiar example of such materials, Sun explains, is diamond versus graphite, the material of pencil lead: While both have the same composition — pure carbon — diamond is the metastable form, and over time will ultimately turn to graphite.

Calcium carbonate usually crystallizes as calcite, but surprisingly, it forms aragonite in seawater. The outcome affects many different processes — including the global carbon cycle, neutralizing carbon dioxide in the atmosphere into a stable mineral and limiting its buildup in the air. It also affects the formation of shells and corals, whose aragonite shells are vulnerable to the ocean acidification associated with climate change.

While scientists have known that different concentrations of magnesium in the surrounding water affect the fate of calcium carbonate, they have had no explanation for this. The MIT team’s analysis shows that the ratio of calcium to magnesium in the water affects the surface energy of the nucleating crystals; when that ratio passes a specific value, it tips the balance from forming calcite to forming aragonite.

“The surface energy is the barrier to nucleation,” Sun says. “We were able to calculate the effect of magnesium on the surface energy.” Though this surface energy is difficult to measure experimentally, the team was able to determine it through atomic-level calculations, he says: “We discovered that this was the mechanism of how magnesium stops the formation of the stable phase.”

If there is no magnesium in the solution, the stable calcite forms quickly, Sun says. “But as you increase the magnesium concentration, the calcite surface energy increases, and its nucleation rate drops by orders of magnitude,” he adds. “Eventually the nucleation of calcite gets frozen out, and you’re stuck with the metastable aragonite phase.”

The researchers’ calculated results closely match the proportions of the two forms seen experimentally when the magnesium ratios are varied, Sun says, showing that the analysis provides a tool to predict how other compounds will form from a solution.

Ultimately, the MIT team’s goal is to predict and control which materials form under various chemical solutions, making it possible to control the formation of new materials whose characteristics — such as hardness, chemical reactivity, transparency, or conductivity — are useful for technological applications.

The research is an outgrowth of the MIT- and LBNL-based Materials Project, conceived by Ceder, which has created an online database and tools to allow researchers to explore possible combinations of elements and discover new materials for specific purposes. These tools allow people to find chemical compounds that may never have been tried before, but which should exhibit the desired properties.

“So far, computational materials science has been very useful at predicting which materials might possess desirable technological properties,” Sun says, “This work enables us to predict how to reliably make them.”

“This is high-quality and very important work,” says Vladan Stevanovic, a research assistant professor of physics at the Colorado School of Mines, who was not involved in this research. "It is general enough to be applied both to other similar problems, as well as to designing needed growth conditions to achieve target phases.”

The research team also included Saivenkataraman Jayaraman from MIT and Wei Chen and Kristin Persson of LBNL. The work was supported by the U.S. Department of Energy and the National Science Foundation.