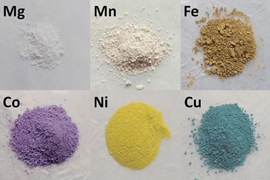 ↓ Download Image
Caption: Examples of materials discovered through new technique: Lithium-containing compounds called sidorenkites were identified as potential battery cathode materials through high-throughput computational exploration. No lithium-containing materials with the CO3 and PO4 chemical groups found in these compounds exist in nature — these materials are fully synthetic and unexpected. Depending on the specific metal in them, they take on distinct colors (shown here).

Caption:
Examples of materials discovered through new technique: Lithium-containing compounds called sidorenkites were identified as potential battery cathode materials through high-throughput computational exploration. No lithium-containing materials with the CO3 and PO4 chemical groups found in these compounds exist in nature — these materials are fully synthetic and unexpected. Depending on the specific metal in them, they take on distinct colors (shown here).

Credits:
Image courtesy of the researchers
Trying to find new materials, to improve the performance of anything from microchips to car bodies, has always been a process of trial and error. MIT materials scientist Gerbrand Ceder likens it to setting out from Boston for California, with neither a map nor a navigation system — and on foot.

But, he says, after centuries of doing materials research the old-fashioned way, a significant revolution is underway, thanks to a massive computerized database and simulation system that can sort through thousands of potential materials in the time it previously might have taken to study just one. The system is called the Materials Project; while only about three years old, it has already produced significant new findings.

For example, researchers using the Materials Project’s online tools found entirely new types of transparent conducting materials — a class crucial for devices with touch screens, such as smartphones — that do not exist in nature and whose existence had not been predicted. Others have used the system to find new materials that could find uses in battery electrodes and semiconductors.

There are a total of about 35,000 known inorganic compounds, Ceder says; nearly all are included in the Materials Project’s database, The data also includes thousands of unknown compounds that do not exist in nature and have not yet been synthesized in the laboratory — but whose basic characteristics can be predicted using complex computations based on quantum mechanical theory. The vision is to create a compendium of materials’ characteristics: electrical conductivity, crystal structure, hardness, stability, and so on.

Ceder and colleagues at MIT and the Lawrence Berkeley National Laboratory (LBNL) have described this new approach, which they call “high-throughput computational materials design,” in recent articles in Scientific American and APL Materials. Their work has inspired the White House to launch a national effort, now called the Materials Genome Initiative (the initial name of the project led by MIT and LBNL), to spread the new approach to institutions around the country.

“We know very little about the world of chemical compounds around us,” says Ceder, the Richard P. Simmons Professor of Materials Science and Engineering. “If you pick a random compound out of the ones we know, and ask, ‘How hard is it? Is it a good conductor? What color does it have? Is it stiff?’ — you wouldn’t know the answer.” A rough estimate, he says, is that we know less than 1 percent of the properties of the compounds around us.

And that’s just counting the basic properties, Ceder says: The knowledge is even sparser when it comes to “engineering behavior” — the more detailed knowledge, such as durability under stress or susceptibility to corrosion, needed to choose a material for a specific application. The plan to build a comprehensive database of materials’ properties, he says, lays a foundation, much as the Human Genome Project has established baseline knowledge about the genetic basis of human characteristics.

“A lot of these properties can now be computed,” Ceder says. The aim of the Materials Project, over the next few years, is to “just compute these properties for all known compounds, and some unknown ones.” With that information, engineers could use a computer to screen thousands of materials for a particular application, based on the specific properties that are needed.

For example, Procter & Gamble asked Ceder and his colleagues to screen all possible materials for a new electrode for the company’s Duracell batteries. The team was able to screen 130,000 real or hypothetical compounds, devising a list of 200 that met the desired criteria and that had the potential to perform better than the materials now used. Another company used the system to discover a new catalyst for splitting water into hydrogen and oxygen; a third used it to find a new material to be used in computer memory chips.

The hope is that within five to 10 years, the database will contain information on the basic properties of all compounds that can exist. That will take “a few million CPU hours over the next few years,” Ceder says — which sounds like a lot, but is actually a relatively small amount compared to some computationally intensive tasks such as climate modeling or simulating explosions, he says.

This, he says, would allow modern materials scientists to progress from something akin to 16th-century explorers — trying to learn about a continent without maps or compasses — to today’s travelers, with their GPS devices.

“We don’t get lost anymore,” Ceder says. But as with maps, the Materials Project doesn’t tell you where to go, it just tells you how to get there: “It’s still up to you to decide what properties you need.”

Geoffroy Hautier, a research scientist at the Catholic University of Louvain in Belgium, says, “The traditional way of developing materials is often very empirical and relies a lot on serendipity, and intuition.” But with the Materials Project, which Hautier and colleagues have used to discover new transparent, conductive materials, “high-throughput computing provides a tremendous acceleration to the whole process.”

Already, the free website has 5,000 subscribers, about a third of whom are in industry. “In the world of materials science, that’s a very large number,” Ceder says. The net result is that it’s now possible to develop materials for real applications in as little as two years, compared to 15 to 20 years using traditional methods. “We believe we are entering a golden age of materials design,” he says.