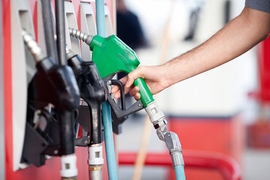 The politics of climate change are often depicted as a simple battle, between environmentalists and particular industries, over government policy. That’s not wrong, but it’s only a rough sketch of the matter. Now a paper co-authored by MIT economist Christopher Knittel fills in some important details of the picture, revealing an essential mechanism that underlies the politics of the climate battle.

Specifically, as Knittel and his colleagues demonstrate, at least one climate policy enacted by Congress — on transportation fuels — contains a crucial asymmetry: It imposes modest costs on most people, but yields significant benefits for a smaller group. Thus, most people are politically indifferent to the legislation, even though it hurts them marginally, but a few fight hard to maintain it. The same principle may also apply to other types of climate legislation.

In 2005, Congress introduced the Renewable Fuel Standard (RFS), which mandates a minimum level of ethanol that must be used in gasoline every year, as a way of reducing greenhouse gas emissions. Ethanol can indeed reduce emissions, but as Knittel and other economists have argued, it is not the most efficient way of doing so: He estimates that mandating ethanol use is at least 2.5 times as costly, per ton of greenhouse gas reduction, as a cap-and-trade (CAT) policy, which would price the carbon emitted by all transportation fuels.

But corn-based ethanol production has strong political support in the Midwest, where much of the corn industry is based. In the new paper, Knittel and his colleagues quantify that effect in unique detail. They model what U.S. fuel consumption would likely look like through 2022 under both RFS and CAT scenarios, among others. Compared with a cap-and-trade system, the average American would lose $34 annually due to the RFS policy. But 5 percent of U.S. counties would gain more than $1,250 per capita, and one county gains $6,000 per capita.

Thus, most people are indifferent to the shortcomings of the RFS policy, but those who care tend to support it vigorously.

“Because of the skew in the distribution, you have the typical voter who doesn’t find it in their interest to fight against the inefficient policy, but the big winners are really going to fight for the inefficient policy,” says Knittel, the William Barton Rogers Professor in Energy at MIT, adding: “If the typical voter is losing $30 a year, that’s not enough for me to write to my congressman. Whereas if you have someone on the upper end who is going to gain $6,000 — that’s enough for me to write my congressman.”

The political economy of energy

As the study shows, some folks do more than write to their representatives. Knittel and his colleagues found that members of the House of Representatives in districts that gain greatly from the RFS policy received an average of $33,000 more from organizations that opposed one particular piece of legislation — the 2009 Waxman-Markey bill, which would have created a CAT system, and likely would have reduced ethanol use. That bill passed in the House in July 2009, but was never taken up by the U.S. Senate.

That difference in campaign contributions holds up strongly even when the researchers controlled for factors such as ideology, state, and overall emissions. That is, other things being equal, representatives of the specific areas benefitting most from RFS were given far more in donations from opponents of the Waxman-Markey bill than other congressmen. Representatives were also 39 percentage points more likely to oppose Waxman-Markey, other things being equal, if they were in districts that benefit strongly from the RFS policy.

“It’s a very robust finding,” Knittel says. “One interpretation is that these people or corporations who were donating money have a model very similar to ours, and are able to predict winners and losers under different policies. This is a very sophisticated group.”

On one level, the results confirmed something that was broadly understood: Areas with corn-based economies support ethanol. On another level, the study reveals the deep asymmetry that structures the politics of the issue: on one side, widespread indifference; on the other, narrow but deep support.

“It wasn’t until we got the results that we were able to think through the political economy of it,” Knittel says.

The paper, “Some Inconvenient Truths About Climate Change Policy: The Distributional Impacts of Transportation Policies,” is forthcoming in the Review of Economics and Statistics.

To conduct the study, the researchers used modeling by Parker that estimates where ethanol production will be located in coming years, as well as projecting the overall costs of various potential transportation fuel policies, were they to be implemented. The work also drew extensively on methods the other co-authors have used in evaluating both the potential impact of biofuels as a gasoline replacement and the relationship between policy options and politics.

On the general question of picking the optimal emissions–reduction policy, Knittel says, “The efficient policy is to tax the externality.” That is, to tax the additional cost or problem imposed on people — in this case, greenhouse gas emissions. That forces consumers to account for the costs of their own decisions, such as buying fuel-efficient vehicles.

Other scholars in the field regard the paper as a significant contribution to the study of energy politics. Mark Jacobsen, an associate professor of economics at the University of California at San Diego who has read the paper, says the “voting and donations models are both quite convincing.”

Jacobsen adds: “A very important contribution of this paper is in pointing out that we need to be alert to distribution [of energy resources] across states, making sure that it does not stand in the way of otherwise good policy.”

Knittel suggests the same kind of political asymmetry is probably at work in other aspects of climate politics. When it comes to coal-burning power plants, most people are only marginally affected by policy changes — but people living in coal-mining areas are deeply affected, and so have a much larger impact on the policy debate.

“We hope this paper sparks a literature that can do the same thing for other fuels,” Knittel says.