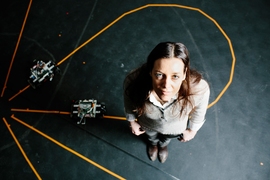 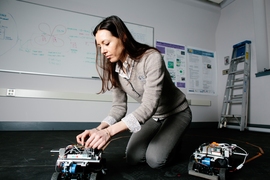 Engineering was in Domitilla Del Vecchio’s blood from the very beginning: Growing up in Rome as the daughter of an engineer, she spent long hours of her childhood tinkering and playing in her father’s home laboratory and exploring the various bits of electronics and lab equipment he would bring home.

“He had a lab at our place that was full of all these colorful pieces of computers, all opened up,” Del Vecchio recalls — and she delighted to learn about them. Then, in middle school, “I had this math teacher who had an unconventional way of teaching math: She started with the theory of numbers, an almost philosophical approach. … I was fascinated by that.”

Del Vecchio attended a math-focused “liceo” — the Italian version of high school — where a “fantastic” biology teacher helped expand her interests in that field. But she then struggled to find a college where she could explore all of the subjects that excited her: “I knew I loved math and engineering, and I was very interested in biology, and I was struggling to find the right college degree that would encompass the three together.”

Del Vecchio’s father died when she was 10, leaving her mother to support her and her younger brother. Her mother ran a small company that provided technical support for banks, which she eventually grew from just three people to become a large and successful business. Meanwhile, she stressed the importance of a good education for her children. “Without her support, monetary and emotional, I probably would not have come to the U.S,” Del Vecchio says. “She encouraged me to follow my passions and listen to them.”

After getting her master’s, Del Vecchio worked in Rome for a year as a researcher before heading to Caltech for her PhD. While in Rome, she worked on automated control systems for robotic manipulators; at Caltech, her focus was on facilitating collaboration between robots and humans carrying out tasks together. In that work on automation, she mathematically characterized the concept of “movemes”: small units of action that could be analyzed and strung together to build up a useful sequence of activity.

After earning her doctorate, Del Vecchio took a faculty position at the University of Michigan, continuing her research on robotic control systems, and working on algorithms to guide automated vehicles through real-world traffic.

But despite the focus on electronics and automation throughout her academic training, Del Vecchio retained a fascination with biology. She started doing collaborative research with biologists while at Caltech, she says, aimed at “building circuits in cells.”

“It was really new to me to realize that engineering, biology, and math could come together” in this way, she recalls. “That I found to be extremely exciting, trying to understand principles for engineering circuits in a cell, just like we do in electrical engineering.”

Unlike electrical circuits, where each component is connected to the next by wires, in a biological circuit all components float freely within a cell. Instead of a linear physical configuration, the sequencing of steps in a biological circuit is controlled by the way one molecule interacts with others, forming new compounds that then react with other, different molecules. The sequence is controlled by chemistry rather than geometry — but that makes the control of such circuits much trickier to engineer.

Biological circuits have remained an active area of Del Vecchio’s research since she came to MIT as an assistant professor of mechanical engineering in 2010. Attracted by “the strong program here in synthetic biology and biological engineering,” and by MIT’s encouragement of working across disciplines and departments, “I decided that this was going to be a positive place for me,” she says.

Del Vecchio is now an associate professor in the Department of Mechanical Engineering, where she earned tenure last year. Also last year, she co-authored a paper describing a significant advance toward making biological circuits practical: the creation of a device, called a load driver, that can greatly increase the predictability of outcomes from biological circuits.

Not only do such connections provide a stimulating intellectual environment, she adds, but “I feel we have higher chances to have an impact that way.”

Living cells say: Can you hear me now?