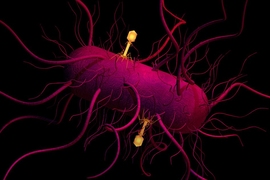 In the hunt for new ways to kill harmful bacteria, scientists have turned to a natural predator: viruses that infect bacteria. By tweaking the genomes of these viruses, known as bacteriophages, researchers hope to customize them to target any type of pathogenic bacteria.

To help achieve that goal, MIT biological engineers have devised a new mix-and-match system to genetically engineer viruses that target specific bacteria. This approach could generate new weapons against bacteria for which there are no effective antibiotics, says Timothy Lu, an associate professor of electrical engineering and computer science and biological engineering.

“These bacteriophages are designed in a way that’s relatively modular. You can take genes and swap them in and out and get a functional phage that has new properties,” says Lu, the senior author of a paper describing this work in the Sept. 23 edition of the journal Cell Systems.

These bacteriophages could also be used to “edit” microbial communities, such as the population of bacteria living in the human gut. There are trillions of bacterial cells in the human digestive tract, and while many of these are beneficial, some can cause disease. For example, some reports have linked Crohn’s disease to the presence of certain strains of E. coli.

“We’d like to be able to remove specific members of the bacterial population and see what their function is in the microbiome,” Lu says. “In the longer term you could design a specific phage that kills that bug but doesn’t kill the other ones, but more information about the microbiome is needed to effectively design such therapies.”

The Food and Drug Administration has approved a handful of bacteriophages for treating food products, but efforts to harness them for medical use have been hampered because isolating useful phages from soil or sewage can be a tedious, time-consuming process. Also, each family of bacteriophages can have a different genome organization and life cycle, making it difficult to engineer them and posing challenges for regulatory approval and clinical use.

The MIT team set out to create a standardized genetic scaffold for their phages, which they could then customize by replacing the one to three genes that control the phages’ bacterial targets.

Many bacteriophages consist of a head region attached to a tail that enables them to latch onto their targets. The MIT team began with a phage from the T7 family that naturally kills Escherichia coli. By swapping in different genes for the tail fiber, they generated phages that target several types of bacteria.

“You keep the majority of the phage the same and all you’re changing is the tail region, which dictates what its target is,” Lu says.

To find genes to swap in, the researchers combed through databases of phage genomes looking for sequences that appear to code for the key tail fiber section, known as gp17.

After the researchers identified the genes they wanted to insert into their phage scaffold, they had to create a new system for performing the genetic engineering. Existing techniques for editing viral genomes are fairly laborious, so the researchers came up with an efficient approach in which they insert the phage genome into a yeast cell, where it exists as an “artificial chromosome” separate from the yeast cell’s own genome. During this process the researchers can easily swap genes in and out of the phage genome.

“Once we had that method, it allowed us very easily to identify the genes that code for the tails and engineer them or swap them in and out from other phages,” Lu says. “You can use the same engineering strategy over and over, so that simplifies that workflow in the lab.”

The new approach also overcomes an important hurdle in using bacteriophages to treat disease, says David Bikard, a microbiologist at the Institut Pasteur in Paris.

“Phages tend to infect only a very limited number of bacterial strains, which makes it difficult to choose the right phage for the right infection, if such a phage is available at all,” says Bikard, who was not involved in the research. “This is a big step in the development of phage therapies with predictable outcomes and a good demonstration of what synthetic biology approaches will bring to medicine in the near future.”

In this study, the researchers engineered phages that can target pathogenic Yersinia and Klebsiella bacteria, as well as several strains of E. coli. These are all part of a group known as Gram-negative bacteria, against which there are few new antibiotics. This group also includes microbes that can cause respiratory, urinary, and gastrointestinal infections, including pneumonia, sepsis, gastritis, and Legionnaires’ disease.

One advantage of the engineered phages is that unlike many antibiotics, they are very specific in their targets. “Antibiotics can kill off a lot of the good flora in your gut,” Lu says. “We aim to create effective and narrow-spectrum methods for targeting pathogens.”

Lu and his colleagues are now designing phages that can target other strains of harmful bacteria, which could have applications such as spraying on crops or disinfecting food, as well as treating human disease. Another advantage of this approach is that all of the phages are based on an identical genetic scaffold, which could streamline the process of getting regulatory approval, Lu says.

In an article for New Scientist, Anna Nowogrodzki writes that MIT researchers have developed a way to engineer bacteria-destroying viruses. The viruses, “could eventually be used to kill disease-causing bacteria in the body while leaving our ‘good’ bacteria unharmed,” Nowogrodzki explains.