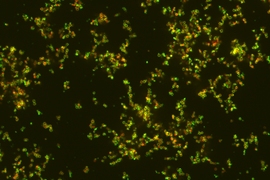 Caption:
Nanoparticles, in green, targeting bacteria, shown in red.
Credits:
Image: Aleks Radovic-Moreno
Over the past several decades, scientists have faced challenges in developing new antibiotics even as bacteria have become increasingly resistant to existing drugs. One strategy that might combat such resistance would be to overwhelm bacterial defenses by using highly targeted nanoparticles to deliver large doses of existing antibiotics.

In a step toward that goal, researchers at MIT and Brigham and Women’s Hospital have developed a nanoparticle designed to evade the immune system and home in on infection sites, then unleash a focused antibiotic attack.

This approach would mitigate the side effects of some antibiotics and protect the beneficial bacteria that normally live inside our bodies, says Aleks Radovic-Moreno, an MIT graduate student and lead author of a paper describing the particles in the journal ACS Nano.

Institute Professor Robert Langer of MIT and Omid Farokzhad, director of the Laboratory of Nanomedicine and Biomaterials at Brigham and Women’s Hospital, are senior authors of the paper. Timothy Lu, an assistant professor of electrical engineering and computer science, and MIT undergraduates Vlad Puscasu and Christopher Yoon also contributed to the research.

The team created the new nanoparticles from a polymer capped with polyethylene glycol (PEG), which is commonly used for drug delivery because it is nontoxic and can help nanoparticles travel through the bloodstream by evading detection by the immune system.

Their next step was to induce the particles to specifically target bacteria. Researchers have previously tried to target particles to bacteria by giving them a positive charge, which attracts them to bacteria’s negatively charged cell walls. However, the immune system tends to clear positively charged nanoparticles from the body before they can encounter bacteria.

To overcome this, the researchers designed antibiotic-carrying nanoparticles that can switch their charge depending on their environment. While they circulate in the bloodstream, the particles have a slight negative charge. However, when they encounter an infection site, the particles gain a positive charge, allowing them to tightly bind to bacteria and release their drug payload.

This switch is provoked by the slightly acidic environment surrounding bacteria. Infection sites can be slightly more acidic than normal body tissue if disease-causing bacteria are reproducing rapidly, depleting oxygen. Lack of oxygen triggers a change in bacterial metabolism, leading them to produce organic acids. The body’s immune cells also contribute: Cells called neutrophils produce acids as they try to consume the bacteria.

Just below the outer PEG layer, the nanoparticles contain a pH-sensitive layer made of long chains of the amino acid histidine. As pH drops from 7 to 6 — representing an increase in acidity — the polyhistidine molecule tends to gain protons, giving the molecule a positive charge.

Once the nanoparticles bind to bacteria, they begin releasing their drug payload, which is embedded in the core of the particle. In this study, the researchers designed the particles to deliver vancomycin, used to treat drug-resistant infections, but the particles could be modified to deliver other antibiotics or combinations of drugs.

Many antibiotics lose their effectiveness as acidity increases, but the researchers found that antibiotics carried by nanoparticles retained their potency better than traditional antibiotics in an acidic environment.

The current version of the nanoparticles releases its drug payload over one to two days. “You don’t want just a short burst of drug, because bacteria can recover once the drug is gone. You want an extended release of drug so that bacteria are constantly being hit with high quantities of drug until they’ve been eradicated,” Radovic-Moreno says.

Young Jik Kwon, associate professor of chemical engineering and materials science at the University of California at Irvine, says the new nanoparticles are well designed and could have great potential impact in treating infectious diseases, particularly in developing countries. “Most nanotechnology has been targeted to cancer drug delivery or imaging; not many people have shown interest in using a nanotechnology approach for infectious disease,” says Kwon, who was not part of the research team.

Although further development is needed, the researchers hope the high doses delivered by their particles could eventually help overcome bacterial resistance. “When bacteria are drug resistant, it doesn’t mean they stop responding, it means they respond but only at higher concentrations. And the reason you can’t achieve these clinically is because antibiotics are sometimes toxic, or they don’t stay at that site of infection long enough,” Radovic-Moreno says.

One possible challenge: There are also negatively charged tissue cells and proteins at infection sites that can compete with bacteria in binding to nanoparticles and potentially block them from binding to bacteria. The researchers are studying how much this might limit the effectiveness of their nanoparticle delivery. They are also conducting studies in animals to determine whether the particles will remain pH-sensitive in the body and circulate for long enough to reach their targets.