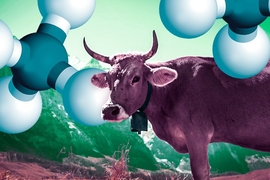 ↓ Download Image
Caption: Individual cows can produce up to 500 liters of methane a day; the species accounts for about one-third of total methane emissions. The structures shown represent the structure of methane.
Credits: Photo: Danielle Gruen (edited by Jose-Luis Olivares/MIT) 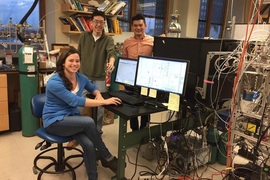 Caption:
Individual cows can produce up to 500 liters of methane a day; the species accounts for about one-third of total methane emissions. The structures shown represent the structure of methane.
Credits:
Photo: Danielle Gruen (edited by Jose-Luis Olivares/MIT)

Methane is a potent greenhouse gas, second only to carbon dioxide in its capacity to trap heat in Earth’s atmosphere for a long time. The gas can originate from lakes and swamps, natural-gas pipelines, deep-sea vents, and livestock. Understanding the sources of methane, and how the gas is formed, could give scientists a better understanding of its role in warming the planet.

Now a research team led by scientists at MIT and including colleagues from the Woods Hole Oceanographic Institution, the University of Toronto, and elsewhere has developed an instrument that can rapidly and precisely analyze samples of environmental methane to determine how the gas was formed.

The approach, called tunable infrared laser direct absorption spectroscopy, detects the ratio of methane isotopes, which can provide a “fingerprint” to differentiate between two common origins: microbial, in which microorganisms, typically living in wetlands or the guts of animals, produce methane as a metabolic byproduct; or thermogenic, in which organic matter, buried deep within the Earth, decays to methane at high temperatures.

The researchers used the technique to analyze methane samples from settings including lakes, swamps, groundwater, deep-sea vents, and the guts of cows, as well as methane generated by microbes in the lab.

“We are interested in the question, ‘Where does methane come from?’” says Shuhei Ono, an assistant professor of geochemistry in MIT’s Department of Earth, Atmospheric and Planetary Sciences. “If we can partition how much is from cows, natural gas, and other sources, we can more reliably strategize what to do about global warming.”

Ono and his colleagues, including first author and graduate student David Wang, publish their results this week in the journal Science.

Locking in on methane’s frequency

Methane is a molecule composed of one carbon atom linked to four hydrogen atoms. Carbon can come as one of two isotopes (carbon-12 or carbon-13); hydrogen can also take two forms, including as deuterium — an isotope of hydrogen with one extra neutron.

The authors looked for a very rare molecule of doubly isotope-substituted methane, known as 13CH3D — a molecule with both an atom of carbon-13 and a deuterium atom. Detecting 13CH3D was crucial, the researchers reasoned, as it may be a signal of the temperature at which methane formed — essential for determining whether methane is microbial or thermogenic in origin.

Last year, Ono and colleagues, working with scientists from Aerodyne Research, built an instrument to detect 13CH3D. The technique uses infrared spectroscopy to detect specific frequencies corresponding to minute motions within molecules of methane; different frequencies correspond to different isotopes. This spectroscopic approach, which is fundamentally different from the classical mass spectrometric methods being developed by others, has the advantage of portability, allowing its potential deployment in field locations.

The team collected samples of methane from settings such as lakes, swamps, natural gas reservoirs, the digestive tracts of cows, and deep ancient groundwater, as well as methane made by microbes in the lab.

The group noticed something surprising and unexpected in some samples. For example, based on the isotope ratios they detected in cow rumen, they calculated that this methane formed at 400 degrees Celsius — impossible, as cow stomachs are typically about 40 C. They observed similar incongruences in samples from lakes and swamps. The isotope ratios, they reasoned, must not be a perfect indicator of temperature.

Instead, Wang and his colleagues identified a relationship between a feature of the bonds linking carbon and hydrogen in methane molecules — a quality they deemed “clumpiness” — and the rate at which methane was produced: The clumpier the bond, the slower the rate of methanogenesis.

“Cow guts produce methane at very high rates — up to 500 liters a day per cow. They’re giant methane fermenters, and they prefer to make less-clumped methane, compared to geologic processes, which happen very slowly,” Wang says. “We’re measuring a degree of clumpiness of the carbon and hydrogen isotopes that helps us get an idea of how fast the methane formed.”

The researchers applied this new interpretation to methane formed by microbes in the lab, and found good agreement between the isotopes detected and the rates at which the gas formed. They then used the technique to analyze methane from Kidd Creek Mine, in Canada — one of the deepest accessible points on Earth — and two sites in California where the Earth’s mantle rock reacts with groundwater. These are sites in which the origins of methane were unclear.

“It’s been a longstanding question how those fluids were developed,” Wang says. “Now we have a baseline that we can use to explore how methane forms in environments on Earth and beyond.”

Robert Hazen, executive director of the Deep Carbon Observatory in Washington, D.C., who was not involved in the research, sees the group’s new detector as “a radical departure from traditional mass spectrometer techniques. This new approach offers significant advantages in terms of it size, expenses, and adaptability to multiple clumped isotope systems. One can even envision a time when a portable unit might be used in field studies. That's an amazing advance.”