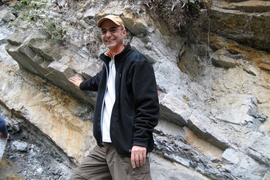 ↓ Download Image
Caption: MIT professor of geophysics Daniel Rothman stands next to part of the Xiakou formation in China. His right hand rests on the layer that marks the time of the end-Permian mass extinction event. Samples from this formation provided evidence for large amounts of nickel that were spewed from volcanic activity at this time, 252 million years ago.
Credits: Photo courtesy of Daniel Rothman 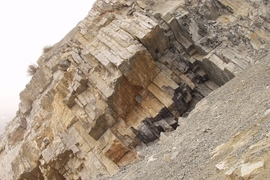 ↓ Download Image
Caption: A photo of the permian triassic boundary at Meishan, China. This photo shows the limestone beds in between the volcanic ash beds that the researchers were able to date.
Credits: Photo: Shuzhong Shen

Caption:
MIT professor of geophysics Daniel Rothman stands next to part of the Xiakou formation in China. His right hand rests on the layer that marks the time of the end-Permian mass extinction event. Samples from this formation provided evidence for large amounts of nickel that were spewed from volcanic activity at this time, 252 million years ago.
Credits:
Photo courtesy of Daniel Rothman

Caption:
A photo of the permian triassic boundary at Meishan, China. This photo shows the limestone beds in between the volcanic ash beds that the researchers were able to date.
Credits:
Photo: Shuzhong Shen

Evidence left at the crime scene is abundant and global: Fossil remains show that sometime around 252 million years ago, about 90 percent of all species on Earth were suddenly wiped out — by far the largest of this planet’s five known mass extinctions. But pinpointing the culprit has been difficult, and controversial.

Now, a team of MIT researchers may have found enough evidence to convict the guilty parties — but you’ll need a microscope to see the killers.

The perpetrators, this new work suggests, were not asteroids, volcanoes, or raging coal fires, all of which have been implicated previously. Rather, they were a form of microbes — specifically, methane-producing archaea called Methanosarcina — that suddenly bloomed explosively in the oceans, spewing prodigious amounts of methane into the atmosphere and dramatically changing the climate and the chemistry of the oceans.

Volcanoes are not entirely off the hook, according to this new scenario; they have simply been demoted to accessories to the crime. The reason for the sudden, explosive growth of the microbes, new evidence shows, may have been their novel ability to use a rich source of organic carbon, aided by a sudden influx of a nutrient required for their growth: the element nickel, emitted by massive volcanism at just that time.

The new solution to this mystery is published this week in the Proceedings of the National Academy of Science by MIT professor of geophysics Daniel Rothman, postdoc Gregory Fournier, and five other researchers at MIT and in China.

The researchers’ case builds upon three independent sets of evidence. First, geochemical evidence shows an exponential (or even faster) increase of carbon dioxide in the oceans at the time of the so-called end-Permian extinction. Second, genetic evidence shows a change in Methanosarcina at that time, allowing it to become a major producer of methane from an accumulation of organic carbon in the water. Finally, sediments show a sudden increase in the amount of nickel deposited at exactly this time.

The carbon deposits show that something caused a significant uptick in the amount of carbon-containing gases — carbon dioxide or methane — produced at the time of the mass extinction. Some researchers have suggested that these gases might have been spewed out by the volcanic eruptions that produced the Siberian traps, a vast formation of volcanic rock produced by the most extensive eruptions in Earth’s geological record. But calculations by the MIT team showed that these eruptions were not nearly sufficient to account for the carbon seen in the sediments. Even more significantly, the observed changes in the amount of carbon over time don’t fit the volcanic model.

“A rapid initial injection of carbon dioxide from a volcano would be followed by a gradual decrease,” Fournier says. “Instead, we see the opposite: a rapid, continuing increase.”

“That suggests a microbial expansion,” he adds: The growth of microbial populations is among the few phenomena capable of increasing carbon production exponentially, or even faster.

But if living organisms belched out all that methane, what organisms were they, and why did they choose to do so at that time?

That’s where genomic analysis can help: It turns out that Methanosarcina had acquired a particularly fast means of making methane, through gene transfer from another microbe — and the team’s detailed mapping of the organism’s history now shows that this transfer happened at about the time of the end-Permian extinction. (Previous studies had only placed this event sometime in the last 400 million years.) Given the right conditions, this genetic acquisition set the stage for the microbe to undergo a dramatic growth spurt, rapidly consuming a vast reserve of organic carbon in the ocean sediments.

But there is one final piece to the puzzle: Those organisms wouldn’t have been able to proliferate so prodigiously if they didn’t have enough of the right mineral nutrients to support them. For this particular microbe, the limiting nutrient is nickel — which, new analysis of sediments in China showed, increased dramatically following the Siberian eruptions (which were already known to have produced some of the world’s largest deposits of nickel). That provided the fuel for Methanosarcina’s explosive growth.

The burst of methane would have increased carbon dioxide levels in the oceans, resulting in ocean acidification — similar to the acidification predicted from human-induced climate change. Independent evidence suggests that marine organisms with heavily calcified shells were preferentially wiped out during the end-Permian extinction, which is consistent with acidification.

“A lot of this rests on the carbon isotope analysis,” Rothman says, which is exceptionally strong and clear in this part of the geological record. “If it wasn’t such an unusual signal, it would be harder to eliminate other possibilities.”

John Hayes, a researcher at Woods Hole Oceanographic Institution who was not involved in the research, says this work is “a remarkable combination of physics, biochemistry, and geochemistry. It grows out of years of outstanding and patient work that has provided a highly refined time scale for the events that accompanied Earth’s most severe cluster of extinctions.”

Hayes adds that the team’s identification of one organism that may have been responsible for many of the changes is “the first time that the explosive onset of a single process has been recognized in this way, and it adds very important detail to our understanding of the extinction.”

While no single line of evidence can prove exactly what happened in this ancient die-off, says Rothman, who is also co-director of MIT’s Lorenz Center, “the cumulative impact of all these things is much more powerful than any one individually.” While it doesn’t conclusively prove that the microbes did it, it does rule out some alternative theories, and makes a strong and consistent case, he says.

Financial Times reporter Clive Cookson highlights the work of MIT researchers in identifying a new culprit for the Earth’s largest mass extinction. While volcanic activity did contribute to the extinction, Cookson reports, MIT researchers found the main cause was methane-producing microbes.

The Huffington Post reports on new research from MIT that indicates microbes may have been responsible for Earth’s largest mass extinction. The “Great Dying,” which took place 252 million years ago, wiped out 90 percent of all species.

“A microbial feeding frenzy may have fueled the biggest mass extinction in Earth's history,” writes Tia Ghose for CBS News about new research by Professor Daniel Rothman and Gregory Fournier that suggests microbes may be responsible for the Earth’s largest mass extinction.

“These microbes of death were so small, that 1 billion of them could fit in a thimble-full of ocean sediment, and yet, they were almost responsible for killing off all the life on our planet,” writes Los Angeles Times reporter Deborah Netburn about new research from MIT that indicates microbes may be responsible for the end-Permian mass extinction.

MIT researchers have found evidence that methane-producing microbes may have triggered the largest mass extinction in Earth’s history, reports Will Dunham for Reuters.

Nature reporter Chelsea Ward reports that a team from MIT led by Professor Daniel Rothman has found that, “Methane-belching microbes may have been behind the 'Great Dying', a mass-extinction event that wiped out some 90% of all species on Earth about 252 million years ago.”

The Guardian highlights new research by Professor Daniel Rothman that suggests microbes may be responsible for the end-Permian extinction. As reported by The Guardian, “Analysis of geological carbon deposits reveals a significant boost in levels of carbon-containing gases – either carbon dioxide or methane – at the time of the mass extinction.”

Timeline of a mass extinction

A look back in time