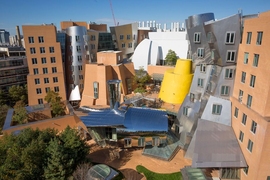 The World Health Organization estimates that 3,400 people die each day from traffic-related accidents. Could autonomous cars be part of the solution?

Today MIT’s Computer Science and Artificial Intelligence Laboratory (CSAIL) announced a new $25 million research center funded by Toyota to further the development of autonomous vehicle technologies, with the goal of reducing traffic casualties and potentially even developing a vehicle incapable of getting into an accident.

Announced at a press conference in California, the Toyota-CSAIL Joint Research Center will be part of a combined $50 million that Toyota has committed to dual centers at MIT and Stanford University to advance the state of autonomous systems.

Led by CSAIL director Daniela Rus, the new center will focus on developing advanced decision-making algorithms and systems that allow vehicles to perceive and navigate their surroundings safely, without human input.

“We are excited to mark the start of our partnership with Toyota, and hopefully the beginning of the end for traffic fatalities,” says Rus, the Andrew and Erna Viterbi Professor in MIT’s Department of Electrical Engineering and Computer Science. “Together we have developed some research directions that have the potential to be game-changers in the field, and we look forward to working closely with Toyota and Stanford to make them real.”

Traditionally, companies have focused on developing systems in which either the human driver must pay attention and be ready to take control, or one in which an automated system is always in control of the vehicle.

CSAIL researchers plan to start by exploring a new alternative approach, in which the human driver pays attention at all times with an autonomous system that is there to jump in to save the driver in the event of an unavoidable accident. This type of system could not only improve safety by reducing the number of accidents, but could also enhance the overall driving experience, Rus explains. She envisions creating a system that could prevent collisions and also provide drivers with assistance navigating tricky situations; support a tired driver by watching for unexpected dangers and diversions; and even offer helpful tips such as letting the driver know she is out of milk at home and planning a new route home that allows the driver to swing by the grocery store.

“A highly advanced system like this would be a major advance in the field of autonomy and an important step on the way to creating a safer world for drivers,” Rus says.

On the technical front, CSAIL’s new center will focus on pressing challenges in autonomy, from computer vision and perception to planning and control to decision-making.

Taking on the “moonshot” challenges

Research at the new center will be aimed at improving vehicular transportation by advancing the science of autonomous systems. Researchers will tackle challenges integral to the development of advanced automated vehicle systems, including building new tools for collecting and analyzing navigation data with the goal of learning from human driving; creating perception and decision-making systems for safe navigation; developing predictive models that can anticipate the behavior of humans, vehicles, and the larger environment; inventing state-of-the-art tools to handle congestion and high-speed driving in challenging situations including adverse weather; improving machine-vision algorithms used to detect and classify objects; and creating more intelligent user interfaces.

Among the CSAIL principal investigators involved will be John Leonard, the Samuel C. Collins Professor in MIT’s Department of Mechanical Engineering, who has pioneered algorithms that allow robots to navigate unknown environments, and Russ Tedrake, an associate professor of computer science and engineering, who oversaw MIT’s DARPA Robotics Challenge team. The researchers say that they are eager to work on solutions that could completely transform the way that humans get around.

“Solving these challenges will require combining our knowledge of data-driven and model-based approaches to decision making and perception,” Rus says. “Developing a vehicle that’s incapable of having an accident is an ambitious goal, but at CSAIL we’ve always focused on the moonshots.”

A new center at MIT, a collaborative effort with Toyota, will be focused on broadening artificial intelligence technologies for cars, writes Eric Adams for Popular Science. Prof. Daniela Rus explains that the MIT center will dedicated to “helping reduce traffic casualties, and potentially even helping us develop a vehicle incapable of getting into a collision.”

Richard Waters of The Financial Times reports that Toyota is funding new research centers at MIT and Stanford to research technologies that could enable computer-assisted driving. Waters explains that the goal behind the new centers is to give “drivers the choice one day of handing over full control to the AI ‘brains’ in their vehicles.”

Toyota has announced that it is funding new research centers at MIT and at Stanford dedicated to developing “intelligent” cars, reports John Markoff for The New York Times. “We see this as basic computer science, A.I. and robotics that will make a difference in transportation,” explains Prof. Daniela Rus.

Toyota is partnering with MIT and Stanford to research autonomous-vehicle technology, reports Marco della Cava for USA Today. “Toyota will use its MIT and Stanford investment dollars to develop on-board systems that will improve an automobile's ability to make smart driving decisions in split seconds when the driver is either unaware or too slow.”

In an effort to spur breakthroughs in autonomous driving technology, Toyota is funding new research centers at MIT and Stanford, the Associated Press reports. Prof. Daniela Rus explains that MIT researchers will be working on developing technology that would make it possible to build a car, “that is never responsible for a collision.”