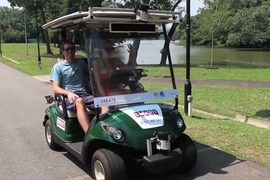 At the International Conference on Intelligent Robots and Systems in September, members of the Singapore-MIT Alliance for Research and Technology (SMART) and their colleagues will describe an experiment conducted over six days at a large public garden in Singapore, in which self-driving golf carts ferried 500 tourists around winding paths trafficked by pedestrians, bicyclists, and the occasional monitor lizard.

The experiments also tested an online booking system that enabled visitors to schedule pickups and drop-offs at any of 10 distinct stations scattered around the garden, automatically routing and redeploying the vehicles to accommodate all the requests.

“We would like to use robot cars to make transportation available to everyone,” says Daniela Rus, the Andrew and Erna Viterbi Professor in MIT’s Department of Electrical Engineering and Computer Science and a senior author on the conference paper. “The idea is, if you need a ride, you make a booking, maybe using your smartphone or maybe on the Internet, and the car just comes.”

SMART is a collaboration between MIT and the National Research Foundation of Singapore. With lead researchers drawn from both MIT and several Singaporean universities — chiefly the National University of Singapore and the Singapore University of Technology and Design — the program offers four-year graduate fellowships that cover tuition for students at the affiliated schools, as well as undergraduate and postdoctoral research fellowships.

Joining Rus on the paper are Emilio Frazzoli, a professor of aeronautics and astronautics at MIT; Marcelo Ang, an associate professor of mechanical engineering at the National University of Singapore; and 16 SMART students, postdocs, and staff members, from both the U.S. and Asia.

Learn how the SMART researchers' autonomous golf carts can navigate their surroundings.

What distinguishes the SMART program’s autonomous vehicles is that “we are taking a minimalist solution to the self-driving-car problem,” Rus says. “The vehicles are instrumented, but they are not as heavily instrumented as the DARPA vehicles [competitors in the U.S. Defense Advanced Research Projects Agency’s autonomous-vehicle challenge] were, nor as heavily instrumented as, say, the Google car. We believe that if you have a simple suite of strategically placed sensors and augment that with reliable algorithms, you will get robust results that require less computation and have less of a chance to get confused by ‘fusing sensors,’ or situations where one sensor says one thing and another sensor says something different.”

Accordingly, the golf carts’ sensors consist entirely of off-the-shelf laser rangefinders mounted at different heights — since unlike the more sophisticated rangefinders deployed in some other autonomous vehicles, they measure distance only in a plane — and a camera.

Algorithmically, one of the keys to the system is what the researchers call the “dynamic virtual bumper,” which can be thought of as a cylinder surrounding the vehicle’s planned trajectory. The width and length of the cylinder are a function of the vehicle’s velocity. When an obstacle enters the cylinder, the vehicle’s onboard computer redraws the cylinder to exclude it. That could mean changing the trajectory, reducing the velocity, or both.

In the experiments, the golf carts received no special treatment; they jockeyed for position on the garden’s paths along with everyone else. But according to Rus, the obstacle-collision system encountered only one difficulty, when a large, slow-moving monitor lizard crossed the path of one of the golf carts. “It was this stop-and-go game over who’s going to do what,” Rus says.

Of course, the golf carts had the advantage of moving relatively slowly — a top speed of only about 15 mph — which gave their algorithms more time to process sensor data and recalculate trajectories. But while the experiment was envisioned chiefly as a step on the path toward self-driving cars, Rus says that relatively slow autonomous golf carts could have their own practical applications.

“If you think about who needs rides,” she says, “it’s fast enough for the elderly population who no longer have a driver’s license and live in special areas where maybe their friend lives a mile away, and that’s too far to walk. If they want to go to the doctor or shopping, they can use the self-driving golf carts because that’s within some comfortable distance.”

“The cart was a joy to ride in,” says Matt Mason, a professor of computer science and robotics at Carnegie Mellon University, who was one of the carts’ passengers during the trial. “It drove all over the place. It avoided all the obstacles we put in its path.  And it did it without a lot of intrusive machinery.”

Kelsey Atherton reports for Popular Science that MIT researcher have developed and tested a self-driving golf cart in a public garden in Singapore. Atherton writes that one potential use for the self-driving golf carts is a shared vehicle system where the carts would “drive people to their destination, and then either return or seek new riders.”