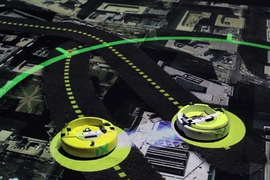 In a darkened, hangar-like space inside MIT’s Building 41, a small, Roomba-like robot is trying to make up its mind.

Standing in its path is an obstacle — a human pedestrian who’s pacing back and forth. To get to the other side of the room, the robot has to first determine where the pedestrian is, then choose the optimal route to avoid a close encounter.

As the robot considers its options, its “thoughts” are projected on the ground: A large pink dot appears to follow the pedestrian — a symbol of the robot’s perception of the pedestrian’s position in space. Lines, each representing a possible route for the robot to take, radiate across the room in meandering patterns and colors, with a green line signifying the optimal route. The lines and dots shift and adjust as the pedestrian and the robot move.

This new visualization system combines ceiling-mounted projectors with motion-capture technology and animation software to project a robot’s intentions in real time. The researchers have dubbed the system “measurable virtual reality (MVR) — a spin on conventional virtual reality that’s designed to visualize a robot’s “perceptions and understanding of the world,” says Ali-akbar Agha-mohammadi, a postdoc in MIT’s Aerospace Controls Lab.

“Normally, a robot may make some decision, but you can’t quite tell what’s going on in its mind — why it’s choosing a particular path,” Agha-mohammadi says. “But if you can see the robot’s plan projected on the ground, you can connect what it perceives with what it does to make sense of its actions.”

Agha-mohammadi says the system may help speed up the development of self-driving cars, package-delivering drones, and other autonomous, route-planning vehicles.

“As designers, when we can compare the robot’s perceptions with how it acts, we can find bugs in our code much faster,” Agha-mohammadi says. “For example, if we fly a quadrotor, and see something go wrong in its mind, we can terminate the code before it hits the wall, or breaks.”

The system was developed by Shayegan Omidshafiei, a graduate student, and Agha-mohammadi. They and their colleagues, including Jonathan How, a professor of aeronautics and astronautics, will present details of the visualization system at the American Institute of Aeronautics and Astronautics’ SciTech conference in January.

Seeing into the mind of a robot

The researchers initially conceived of the visualization system in response to feedback from visitors to their lab. During demonstrations of robotic missions, it was often difficult for people to understand why robots chose certain actions.

“Some of the decisions almost seemed random,” Omidshafiei recalls.

The team developed the system as a way to visually represent the robots’ decision-making process. The engineers mounted 18 motion-capture cameras on the ceiling to track multiple robotic vehicles simultaneously. They then developed computer software that visually renders “hidden” information, such as a robot’s possible routes, and its perception of an obstacle’s position. They projected this information on the ground in real time, as physical robots operated.

MIT researchers explain their new visualization system that can project a robot's "thoughts."

The researchers soon found that by projecting the robots’ intentions, they were able to spot problems in the underlying algorithms, and make improvements much faster than before.

“There are a lot of problems that pop up because of uncertainty in the real world, or hardware issues, and that’s where our system can significantly reduce the amount of effort spent by researchers to pinpoint the causes,” Omidshafiei says. “Traditionally, physical and simulation systems were disjointed. You would have to go to the lowest level of your code, break it down, and try to figure out where the issues were coming from. Now we have the capability to show low-level information in a physical manner, so you don’t have to go deep into your code, or restructure your vision of how your algorithm works. You could see applications where you might cut down a whole month of work into a few days.”

Bringing the outdoors in

The group has explored a few such applications using the visualization system. In one scenario, the team is looking into the role of drones in fighting forest fires. Such drones may one day be used both to survey and to squelch fires — first observing a fire’s effect on various types of vegetation, then identifying and putting out those fires that are most likely to spread.

To make fire-fighting drones a reality, the team is first testing the possibility virtually. In addition to projecting a drone’s intentions, the researchers can also project landscapes to simulate an outdoor environment. In test scenarios, the group has flown physical quadrotors over projections of forests, shown from an aerial perspective to simulate a drone’s view, as if it were flying over treetops. The researchers projected fire on various parts of the landscape, and directed quadrotors to take images of the terrain — images that could eventually be used to “teach” the robots to recognize signs of a particularly dangerous fire.

Going forward, Agha-mohammadi says, the team plans to use the system to test drone performance in package-delivery scenarios. Toward this end, the researchers will simulate urban environments by creating street-view projections of cities, similar to zoomed-in perspectives on Google Maps.

“Imagine we can project a bunch of apartments in Cambridge,” Agha-mohammadi says. “Depending on where the vehicle is, you can look at the environment from different angles, and what it sees will be quite similar to what it would see if it were flying in reality.”

Because the Federal Aviation Administration has placed restrictions on outdoor testing of quadrotors and other autonomous flying vehicles, Omidshafiei points out that testing such robots in a virtual environment may be the next best thing. In fact, the sky’s the limit as far as the types of virtual environments that the new system may project.

“With this system, you can design any environment you want, and can test and prototype your vehicles as if they’re fully outdoors, before you deploy them in the real world,” Omidshafiei says.

While the system will not serve as a substitute for experiments and validation in the real environment, says Alberto Speranzon, staff research scientist at United Technologies Research Center, he says testing autonomous systems in virtual environments could ready such designs for outdoor testing.

“[The system] will enable faster prototyping and testing in closer-to-reality environments,” says Speranzon, who was not involved in the research. “It will also enable the testing of decision-making algorithms in very harsh environments that are not readily available to scientists. For example, with this technology, we could simulate clouds above an environment monitored by a high-flying vehicle and have the video processing system dealing with semi-transparent obstructions.”

This work was supported by Boeing.