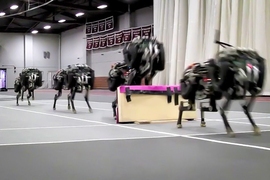 ↓ Download Image
Caption: MIT researchers have trained their robotic cheetah to see and jump over hurdles as it runs — making this the first four-legged robot to run and jump over obstacles autonomously.

Caption:
MIT researchers have trained their robotic cheetah to see and jump over hurdles as it runs — making this the first four-legged robot to run and jump over obstacles autonomously.
Credits:
Image: Haewon Park, Patrick Wensing, and Sangbae Kim.

In a leap for robot development, the MIT researchers who built a robotic cheetah have now trained it to see and jump over hurdles as it runs — making this the first four-legged robot to run and jump over obstacles autonomously.

To get a running jump, the robot plans out its path, much like a human runner: As it detects an approaching obstacle, it estimates that object’s height and distance. The robot gauges the best position from which to jump, and adjusts its stride to land just short of the obstacle, before exerting enough force to push up and over. Based on the obstacle’s height, the robot then applies a certain amount of force to land safely, before resuming its initial pace.

In experiments on a treadmill and an indoor track, the cheetah robot successfully cleared obstacles up to 18 inches tall — more than half of the robot’s own height — while maintaining an average running speed of 5 miles per hour.

“A running jump is a truly dynamic behavior,” says Sangbae Kim, an assistant professor of mechanical engineering at MIT. “You have to manage balance and energy, and be able to handle impact after landing. Our robot is specifically designed for those highly dynamic behaviors.”

Kim and his colleagues — including research scientist Hae won Park and postdoc Patrick Wensing — will demonstrate their cheetah’s running jump at the DARPA Robotics Challenge in June, and will present a paper detailing the autonomous system in July at the conference Robotics: Science and Systems.

Last September, the group demonstrated that the robotic cheetah was able to run untethered — a feat that Kim notes the robot performed “blind,” without the use of cameras or other vision systems.

Now, the robot can “see,” with the use of onboard LIDAR — a visual system that uses reflections from a laser to map terrain. The team developed a three-part algorithm to plan out the robot’s path, based on LIDAR data. Both the vision and path-planning system are onboard the robot, giving it complete autonomous control.

The algorithm’s first component enables the robot to detect an obstacle and estimate its size and distance. The researchers devised a formula to simplify a visual scene, representing the ground as a straight line, and any obstacles as deviations from that line. With this formula, the robot can estimate an obstacle’s height and distance from itself.

Once the robot has detected an obstacle, the second component of the algorithm kicks in, allowing the robot to adjust its approach while nearing the obstacle. Based on the obstacle’s distance, the algorithm predicts the best position from which to jump in order to safely clear it, then backtracks from there to space out the robot’s remaining strides, speeding up or slowing down in order to reach the optimal jumping-off point.

This “approach adjustment algorithm” runs on the fly, optimizing the robot’s stride with every step. The optimization process takes about 100 milliseconds to complete — about half the time of a single stride.

When the robot reaches the jumping-off point, the third component of the algorithm takes over to determine its jumping trajectory. Based on an obstacle’s height, and the robot’s speed, the researchers came up with a formula to determine the amount of force the robot’s electric motors should exert to safely launch the robot over the obstacle. The formula essentially cranks up the force applied in the robot’s normal bounding gait, which Kim notes is essentially “sequential executions of small jumps.”

Optimal is best, feasible is better

Interestingly, Kim says the algorithm does not provide an optimal jumping control, but rather, only a feasible one.

“If you want to optimize for, say, energy efficiency, you would want the robot to barely clear the obstacle — but that’s dangerous, and finding a truly optimal solution would take a lot of computing time,” Kim says. “In running, we don’t want to spend a lot of time to find a better solution. We just want one that’s feasible.”

Sometimes, that means the robot may jump much higher than it needs to — and that’s OK, according to Kim: “We’re too obsessed with optimal solutions. This is one example where you just have to be good enough, because you’re running, and have to make a decision very quickly.”

The team tested the MIT cheetah’s jumping ability first on a treadmill, then on a track. On the treadmill, the robot ran tethered in place, as researchers placed obstacles of varying heights on the belt. As the treadmill itself was only about 4 meters long, the robot, running in the middle, only had 1 meter in which to detect the obstacle and plan out its jump. After multiple runs, the robot successfully cleared about 70 percent of the hurdles.

In comparison, tests on an indoor track proved much easier, as the robot had more space and time in which to see, approach, and clear obstacles. In these runs, the robot successfully cleared about 90 percent of obstacles.

Kim is now working on getting the MIT cheetah to jump over hurdles while running on softer terrain, like a grassy field.

This research was funded in part by the Defense Advanced Research Projects Agency .

Lauren Said-Moorhouse reports for CNN that Prof. Sangbae Kim and his colleagues have developed a new algorithm that allows their robotic cheetah to independently leap over objects. "You have to manage balance and energy, and be able to handle impact after landing,” says Kim. “Our robot is specifically designed for those highly dynamic behaviors."

In this video, Monika Auger of The Wall Street Journal describes how MIT engineers have developed a robotic cheetah that can jump over obstacles autonomously. Auger explains that the robot’s vision and path planning systems give it "complete autonomous control over its movements.”

MIT researchers have trained a cheetah robot they developed to make “flying leaps” over obstacles, reports Devin Coldewey for NBC News. The researchers behind the robotic cheetah aim to “build a ‘high-speed locomotion platform’ with the fastest land animal as its inspiration.”

Victor Luckerson writes for TIME about the robotic cheetah created by a team of MIT researchers that can “autonomously leap tall obstacles in a single bound.” Luckerson explains that, “the cheetah can clear hurdles as high as 18 in. (46 cm) at an average running speed of 5 m.p.h. (8 km/h).”

According to Fox News, MIT’s cheetah robot can now jump over obstacles up to 18 inches tall, which is more than half the robot’s height. “Our goal is to use this kind of robot to save lives in a disaster situation,” explains Professor Sangbae Kim.

MIT researchers have developed a robotic cheetah that can jump over obstacles while running, reports Sandrine Ceurstemont for New Scientist. “The robot spots obstacles in its path with its built-in lidar system, which can build up a picture of the object in its way from reflected laser light,” explains Ceurstemont.

Writing for The Washington Post, Rachel Feltman describes how the MIT robotic cheetah can jump over obstacles up to 18 inches tall.  “The robot uses an algorithm to gauge the height and distance of upcoming obstacles, so it can clear them without breaking its (record-breaking) stride,” Feltman explains.

The robotic cheetah developed by MIT researchers can now autonomously jump over obstacles, reports Nitya Rajan for The Huffington Post. “This is the first time a four-legged robot has used laser sensors to gauges the distance and height of obstacles in its way to plan its jump,” writes Rajan.

Newsweek reporter Felicity Capon writes about the robotic cheetah developed by MIT researchers that can jump over hurdles autonomously. The cheetah uses an onboard mapping system to detect obstacles and estimate their height and distance.

James Temperton writes for Wired about new developments in robotics, highlighting the MIT cheetah robot that can now autonomously jump over hurdles and the miniature origami robots developed by MIT researchers that can fold self-assemble, walk, swim and dissolve.

Allison Pohle reports for Boston.com on new algorithms that allow MIT’s robotic cheetah to jump over obstacles autonomously. “The cheetah first practiced its skills on a treadmill in a lab,” writes Pohle. “It then moved on to an indoor track, and is now being trained to jump while running on the grass.”

Neel Patel writes for Wired about how MIT researchers have trained their robotic cheetah to detect and leap over obstacles. The robot “estimates the height, size, and distance of objects in its path, and adjusts its approach to prepare a jump and safe landing—all without slowing down.”

The robotic cheetah developed by MIT researchers is now capable of jumping over obstacles without human assistance, reports Nidhi Subbaraman for BetaBoston. “As the robot approaches and detects a hurdle, algorithms plan its jumping trajectory unaided by its minders, each adjusting for the speed and position of the robot and the height of the hurdle,” Subbaraman explains.

Carl Franzen reports for Popular Science that the researchers behind MIT’s robotic cheetah have developed new algorithms that allow the robot to detect and jump over obstacles. “Now that the Cheetah 2 is capable of trotting, galloping, and jumping, it might be time to crown a new king of the concrete jungle,” writes Franzen.