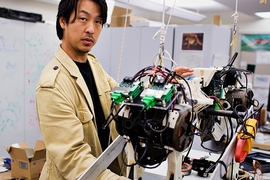 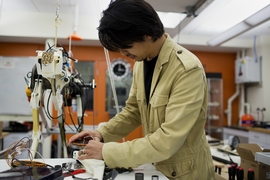 A 70-pound “cheetah” robot designed by MIT researchers may soon outpace its animal counterparts in running efficiency: In treadmill tests, the researchers have found that the robot — about the size and weight of an actual cheetah — wastes very little energy as it trots continuously for up to an hour and a half at 5 mph. The key to the robot’s streamlined stride: lightweight electric motors, set into its shoulders, that produce high torque with very little heat wasted.

The motors can be programmed to quickly adjust the robot’s leg stiffness and damping ratio — or cushioning — in response to outside forces such as a push, or a change in terrain. The researchers will present the efficiency results and design principles for their electric motor at the International Conference on Robotics and Automation in May.

Sangbae Kim, the Esther and Harold E. Edgerton Assistant Professor in MIT’s Department of Mechanical Engineering, says achieving energy-efficiency in legged robots has proven extremely difficult. Robots such as Boston Dynamic’s “Big Dog” carry heavy gasoline engines and hydraulic transmissions, while other electrically powered robots require large battery packs, gears, force sensors and springs to coordinate the joints in a robot’s leg. All this weighty machinery can add up to significant wasted energy, particularly when a robot’s legs need to make frequent contact with the ground in order to trot or gallop.

“In order to send a robot to find people or perform emergency tasks, like in the Fukushima disaster, you want it to be autonomous,” Kim says. “If it could run for more than two hours and search a large field, that would be useful. But one of the reasons why people think it’s impossible to make an electric robot that does this is because efficiencies have been pretty bad.”

Kim adds that part of the challenge in powering running machines with electric motors is that such robots require a flexible response upon impact, and high power, torque and efficiency — characteristics that have historically been difficult to achieve with electric motors.

To understand how an electrically powered system might waste little energy while running, the researchers first looked at general sources of energy loss in running robots. They found that most wasted energy comes from three sources: heat given off by a motor; energy dissipated through mechanical transmission, such as losses to friction through multiple gear trains; and inefficient control, such as energy lost through a heavy-footed step, as opposed to a smoother and more gentle gait.

The group then came up with design principles to minimize such energy waste. To combat heat loss from motors, the group proposed a high-torque-density motor — a motor that produces a significant amount of torque at a given weight and heat production. The team analyzed the relationship between motor size and torque, and designed custom motors that exceed the torque performance of commercially available electric motors.

The team found that such high-torque motors require fewer gears — a characteristic that would improve efficiency even more, as there would be less machinery through which energy could dissipate. Many researchers have used springs and dampers in series with motors to protect the robot from forceful impacts during locomotion, but it’s difficult to control a spring’s stiffness and damping ratio — which can be a problem if a robot has to traverse disparate surfaces, such as asphalt and sand.

“With our system, we can make our robotic leg behave like a spring or damper without having physical springs, dampers or force sensors,” Kim says.

In addition to heat given off by a motor, the group found that another major source of energy loss comes from the force of impact as a robot’s leg hits the ground. Such forces can be strong enough to shake a machine and potentially cause damage. Engineers need to use dampers, or shock absorbers, to minimize shaking and stabilize such systems. But Kim says such dampers act to dissipate energy each time a leg meets the ground.

In contrast, the cheetah-bot’s electric motors capture this energy, feeding it back to the system to further power the robot.

“The majority of impact energy goes back to the battery because the damping is created by custom-designed electric control of the motor,” Kim says. “[The motor] regenerates energy that would have been lost.”

Kim adds that mounting motors and gears at the hip joint would also reduce energy loss by minimizing leg inertia: Some legged robots are designed with motors and gearboxes at each joint along a leg, which can be cumbersome and can lose more energy at every impact. With Kim’s design, 85 percent of the weight of the leg is concentrated at the hip joint, keeping the rest of the leg relatively lightweight.

The researchers also attached strips of Kevlar to connect sections of the robot’s legs, simulating the structure of tendons along a bone. The Kevlar strengthens the leg with little additional weight, and further reduces the leg’s inertia. The group also constructed a flexible spine out of rings of polyurethane rubber, sandwiched between vertebra-like segments. Kim hypothesizes that the spine moves along with the rear legs, and can store elastic energy while galloping.

To test the efficiency of the robot, the researchers ran it on a treadmill at a steady 5-mph clip. They measured the voltage and current of the battery, as well as that from each motor. They calculated the robot’s efficiency of locomotion — also known as cost of transport — and found that it was more efficient than robotic competitors such as Big Dog and Honda’s two-legged robot, ASIMO.

After digging through the literature on animal locomotion, the researchers plotted the cost of transport of various running, flying and swimming animals. They found that, not surprisingly, fliers were more efficient than runners, although swimmers were the most efficient movers. The cheetah robot, according to Kim’s calculations, falls around the efficiency range of humans, cheetahs and hunting dogs.

Currently the team is assembling a set of new motors, designed by Jeffrey Lang, a professor of electrical engineering at MIT. Kim expects that once the group outfits the robot with improved motors, the cheetah robot will be able to gallop at speeds of up to 35 mph, with an efficiency that rivals even fliers. The researchers are convinced that this approach can exceed biological muscle in many aspects, including power, torque and responsiveness.

“There are so many ways to design, and each legged robot has a different system,” Kim says. “If you design the motor properly, it’s more powerful, simpler robotics.”

Ron Fearing, a professor of electrical engineering and computer science at the University of California at Berkeley, says that simple springs can work well in small robots running on smooth terrain. But for rougher, more unpredictable terrain, he says the energy-recovery system of the MIT cheetah has big advantages.

“The cheetah robot has really pushed the technology in efficient motor design, low-loss transmissions, and low-inertia legs,” says Fearing, who did not contribute to the research. “By combining these with the regenerative motor drive system, so that mechanical energy from the leg can recharge the battery, that in my opinion has made a huge difference in efficiency, [and] an important step forward in making efficient, electrically driven running robots.”

In addition to Kim and Lang, the paper’s co-authors include Sangok Seok, Albert Wang, Meng Yee Chuah and David Otten, all of MIT.