Caption:
Magnet-powered "ducks" started as two-dimensional paper prints, which were then heated in an oven that caused them to automatically fold into shape.
Credits:
Photo: Joseph DelPreto/CSAIL

Here’s one way to get kids excited about programming: a "robot garden" with dozens of fast-changing LED lights and more than 100 origami robots that can crawl, swim, and blossom like flowers.

A team from MIT’s Computer Science and Artificial Intelligence Lab (CSAIL) and the Department of Mechanical Engineering have developed a tablet-operated system that illustrates their cutting-edge research on distributed algorithms via robotic sheep, origami flowers that can open and change colors, and robotic ducks that fold into shape by being heated in an oven.

In a paper recently accepted to the 2015 International Conference on Robotics and Automation, researchers describe the system’s dual functions as a visual embodiment of their latest work in distributed computing, as well as an aesthetically appealing way to get more young students, and particularly girls, interested in programming. 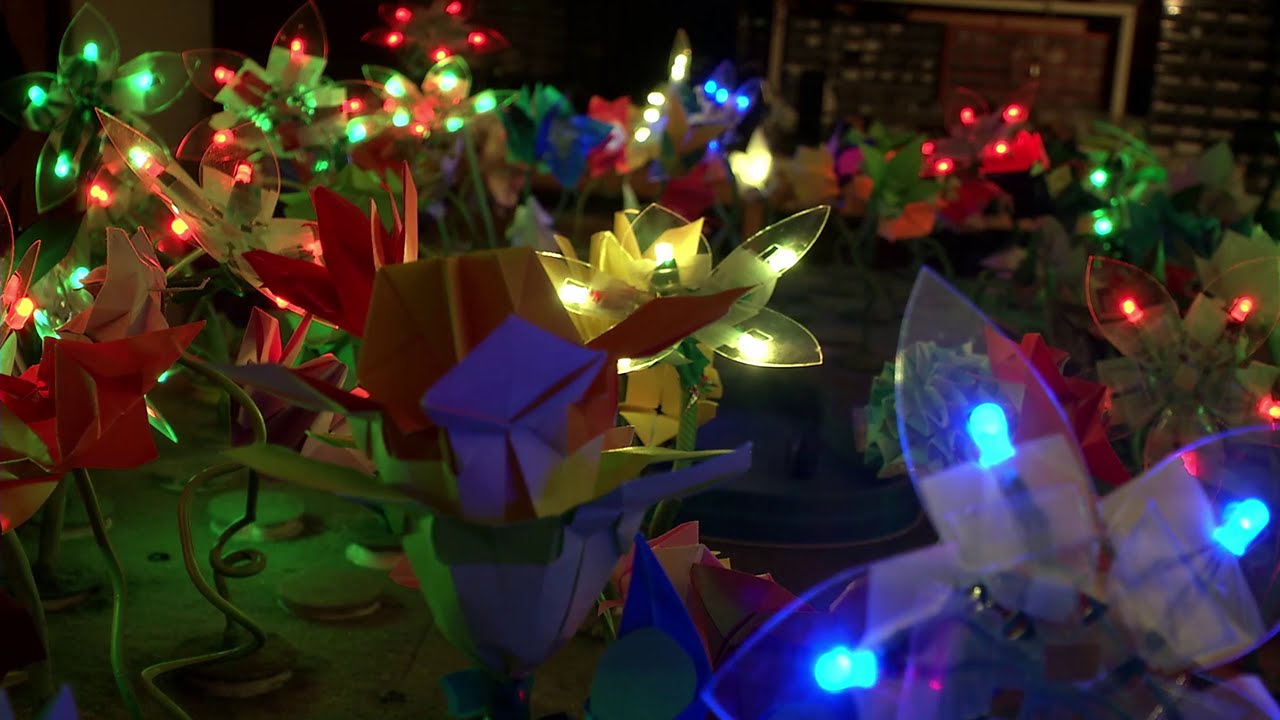 The system can be managed via tablet or any Bluetooth-enabled device, either through a simple “control by click” feature that involves clicking on individual flowers, as well as a more advanced “control by code” feature where users can add their own commands and execute sequences in real-time.

“Students can see their commands running in a physical environment, which tangibly links their coding efforts to the real world,” says Lindsay Sanneman, who is lead author on the new paper. “It’s meant to be a launchpad for schools to demonstrate basic concepts about algorithms and programming.”

Each of the system’s 16 tiles are connected via Arduino microcontrollers and programmed via search algorithms that explore the space in different ways, including a “graph-coloring” algorithm that ensures that no two adjacent tiles ever share the same color.

“The garden tests distributed algorithms for over 100 distinct robots, which gives us a very large-scale platform for experimentation,” says CSAIL Director Daniela Rus, the Andrew and Erna Viterbi Professor of Electrical Engineering and Computer Science and a co-author of the paper. “At the same time, we hope that it also helps introduce students to topics like graph theory and networking in a way that’s both beautiful and engaging.”

Among the other researchers on the new project were PhD candidate Joseph DelPreto, postdocs Ankur Mehta and Shuhei Miyashita, and members of MIT Professor Sangbae Kim’s Biomimetics Robotics Lab, including undergraduates Deborah Ajilo and Negin Abdolrahim Poorheravi, among others.

Kim’s team developed eight distinct varieties of origami flowers — including lilies, tulips, and birds of paradise — which are embedded with printable motors that he says “allow them to blossom in very interesting ways.” The sheep robots were created via traditional print-and-fold origami techniques, while the magnet-powered ducks started as two-dimensional paper prints that were heated in an oven, causing them to automatically fold into shape.

“Many elements of the garden can be made very quickly, including the pouch motors and the LED flowers,” DelPreto says. “We’re hoping that rapid fabrication techniques will continue to improve to the point that something like this could be easily built in a standard classroom.”

Sanneman and DelPreto showed off the current garden to local schools at CSAIL’s “Hour of Code” event in December, and say that they plan to incorporate it into a programming curriculum involving printable robots that they have developed for middle and high schools.

In the future, they also hope to make the garden operable by multiple devices simultaneously, and may even experiment with interactive auditory components by adding microphones and music that would sync to movements.

“Computer science has so many real-world applications that a lot of kids don’t see because they aren’t exposed to them from an earlier age,” Sanneman says. “That’s why we think there’s a lot of potential for tools like this.”

In an article for The Huffington Post about teaching kids computer programming, Joni Blecher highlights the robotic garden developed by researchers from the Department of Mechanical Engineering and CSAIL. The garden has “over 100 flowers that can be controlled via a Bluetooth-enabled device.”

As part of its Game Changers series, Chronicle highlights Prof. Daniela Rus, director of CSAIL, and her work developing robots that can collaborate, change shape and perform multiple tasks. Rus explains that she dreams “of a future where robots are as common as smart phones.”

MIT researchers have developed a garden filled with origami robots, LED flowers that can bloom on command and mechanical insects, reports Nidhi Subbaraman for BetaBoston. The garden was developed in an effort to make programming more accessible to children.

CSAIL opens lab to 150 local students for Hour of Code