Over the last few years, researchers at MIT’s Computer Science and Artificial Intelligence Lab (CSAIL) have developed biologically inspired robots designed to fly like falcons, perch like pigeons, and swim like swordfish. The natural next step? Slithering like snakes.

At this week’s IEEE/RSJ International Conference on Intelligent Robots and Systems, CSAIL researchers will present their work to develop a soft robotic arm, inspired by the design of octopus tentacles, that can snake through a pipelike environment without a human operator.

The arm, which was fabricated using 3-D-printed molds, is the latest in a series of projects in CSAIL Director Daniela Rus’ research group that focus on the burgeoning field of soft robots, which have the potential to be safer, more resilient, and more efficient for certain tasks than their rigid-bodied counterparts.

The mobility of traditional “hard” robots is limited by their fixed joints: They can’t move in confined spaces, and have to be programmed very precisely to avoid collisions that might harm them or their environments.

In contrast, the deformable structures of soft robots means they can squeeze into tight spots and change direction more nimbly. They are also resilient enough to handle minor collisions — and potentially even use these encounters to gain information about their surroundings.

In the case of CSAIL’s robot arm, the research team — which is led by doctoral candidate Andrew Marchese and also includes Rus and PhD student Robert Katzschmann — developed complex algorithms to determine the body curvature needed for the robot to make a diversity of different motions. 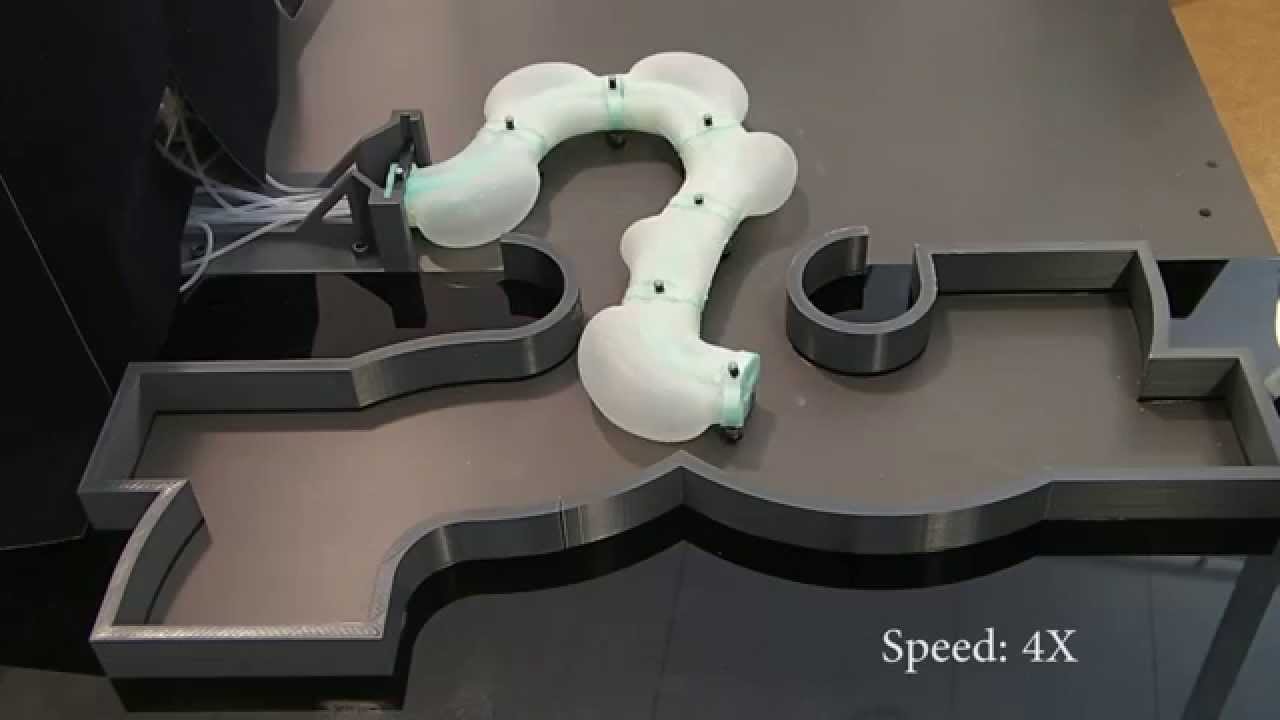 “To move a robot to a particular point in space, you have to determine the specific set of curved arcs needed to get there, which is a tricky task in itself,” Marchese says. “Now imagine moving it through a compact space like a pipe, and having a whole array of points that need to be reached over time. That goal makes the underlying programming much more complicated."

For all of soft robotics’ potential, the field’s relative newness means that researchers are still exploring the best approaches to topics like motion planning and actuation.

For example, the robotic arm is so soft that a typical motor shaft cannot be attached. Instead, the CSAIL team fashioned hollow, expandable channels on both sides of the arm that, when pressurized with air, put strain on the elastic silicone and cause it to change shape like a balloon, allowing the arm to bend to one side.

Another unique feature is that the arm is made completely of silicone rubber — a constraint that challenged the team to develop the necessary programming for a robot that, with its 100 percent soft body, is better suited to navigating human environments.

“Many so-called ‘soft’ robots have still had ‘hard’ elements, like high-pressure actuators and aluminum parts that hold everything together,” Marchese says. “Designing away all the hard components forces us to think about the more difficult questions. Is it possible to do useful manipulation with a robot that’s as soft as chewing gum?”

The arm is the latest step in a line of research that could have applications ranging from finely tuned tasks in factories to handling delicate specimens in research labs to assisting in certain kinds of minimally invasive surgeries. The next version of the arm will include a finger-gripper that the team will use to pick up and place objects.

As robots become a growing presence in people’s lives, safety concerns loom large, and Marchese says that projects like this demonstrate that the answer may rest with rubber.

“I’m not saying that the world should be filled with robotic octopus tentacles on assembly lines,” Marchese says. “I just want to challenge the notion that robots have to look or act a certain way.”

Thomas Tamblyn of The Huffington Post reports on a soft, tentacle-shaped robot developed by doctoral candidate Andrew Marchese and PhD student Robert Katzschmann: “The arm is made using purely silicone which is then inflated and deflated forcing the arm to move in the desired direction.”

“Inspired by octopus tentacles, MIT’s Computer Science and Artificial Intelligence Lab (CSAIL)'s latest robot is as squishy as can be,” writes Rachel Feltman of The Washington Post. “Like other soft robots, this tentacle has potential in search and rescue missions.”

Nidhi Subbaraman of BetaBoston writes about a soft, tentacle-shaped robot created by the Distributed Systems Lab at MIT that is able to navigate autonomously. “[T]he robot can make its way from one side of a pipe maze to another without humans getting involved,” writes Subbaraman.

Francie Diep writes for Popular Science about a soft robot designed by MIT’s Distributed Systems Lab, that is able to navigate a maze unaided: “Researchers that build soft robots like this one hope that in the future, soft machines will be safer for humans to work with than hard metal ones.”