Bubble, bubble, at the flick of a switch 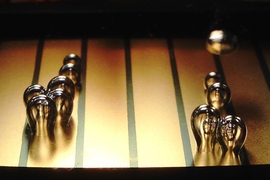 ↓ Download Image
Caption: Researchers found that sections of metal can be made to either promote bubbling (the two rectangles at the edges) or to inhibit bubbling (center rectangles), simply by switching the polarity of voltages applied to the metal.

Caption:
Researchers found that sections of metal can be made to either promote bubbling (the two rectangles at the edges) or to inhibit bubbling (center rectangles), simply by switching the polarity of voltages applied to the metal.
Credits:
Courtesy of the researchers

Boiling water, with its commotion of bubbles that rise from a surface as water comes to a boil, is central to most electric power plants, heating and cooling systems, and desalination plants. Now, for the first time, researchers at MIT have found a way to control this process, literally with the flick of an electrical switch.

The system, which could improve the efficiency of electric power generation and other processes, is described in a paper by Evelyn Wang, the Gail E. Kendall (1978) Professor in the Department of Mechanical Engineering, graduate student Jeremy Cho, and recent graduate Jordan Mizerak ’14, published in the journal Nature Communications.

This degree of control over the boiling process, independent of temperature, Wang says, has not previously been demonstrated despite the ubiquity of boiling in industrial processes. Other systems have been developed to control boiling using electric fields, but these have required special fluids rather than water, and a thousandfold higher voltages, making them economically impractical for most uses.

The new feat was accomplished by adding surfactants to water — essentially creating a soapy liquid. The surfactant molecules, which carry an electrical charge, can be attracted to, or repelled by, a metal surface by changing the polarity of the voltage applied to the metal. This switches the metal surface between being hydrophilic and hydrophobic, Wang explains.

Just as condensation, such as the formation of raindrops, requires a “seed,” like a dust particle, to start the process of nucleation, the bubbles formed by boiling water also require nucleation. Tiny irregularities on a metal surface can provide those nucleation points, but if the surface is hydrophilic the formation of bubbles is inhibited.

“The whole concept relies on the fact that whether a surface is hydrophobic or hydrophilic will affect the rate of nucleation,” Cho says. “If it’s hydrophilic, it’s very difficult to nucleate bubbles.” So by switching the polarity, the rate of bubbling can be precisely controlled.

Unlike other approaches to modifying the wettability of metal surfaces, which rely on the creation of precise kinds of nanoscale textures on the surface, this system makes use of the tiny irregularities that naturally exist on a metal surface and does not require special processing.

Being able to actively control the rate of bubble formation, in turn, allows control over the rate of heat transfer between the metal and the liquid. That could make it possible to make more efficient boilers for powerplants or other applications, since present designs require a substantial safety margin to avoid the possibility of hot spots that could seriously damage the equipment. While most such power plants operate at a steady rate most of the time, being able to control the heat transfer rates dynamically could improve their efficiency when ramping up or down from full power, and thus make it easier to make real-time adjustments in their output without losing efficiency. Similarly, liquid cooling for high-performance electronics also could be made more efficient by being able to control the rate of bubbling to prevent overheating in hotspots, the team says.

This system, Cho adds, provides “the ability to pick the best heat-transfer profile on an as-needed basis,” rather than having to pick a single type of nucleation behavior that allows margins for the most extreme heating that is ever expected for a given device. “This allows you to pick the optimum rate of heat transfer moment by moment,” he says. “Having a boiler that can respond to quick changes” could provide extra flexibility to the electric grid, he says. “It gives you an extra knob” to control the system.

Wang says this work has demonstrated “that you can actively modify the rate of nucleation. It has not been shown previously that this is possible.”

Power plant operators are rightly conservative about making changes, Cho says, since people depend on their output, so even though this system requires only relatively minor changes, a demonstration plant would be needed to prove the concept at operational scale. But “I don’t think there are any huge barriers” to building such a demonstration, he says. “In theory, it should be easy,” Wang says, though only by operating a full-scale system will it be possible to show that the benefits outweigh the costs of installation.

Wang’s team “has shown a new method to control the boiling phenomenon,” says Satish Kandlikar, a professor of mechanical engineering at the Rochester Institute of Technology, who was not involved in this research. “Such control strategies will dramatically alter the heat transfer paradigm in many applications, especially in the electronics cooling industry to cool hot spots. Such strategies can be effectively applied through simple electric controls using the new technology.”

The research was supported by the Singapore-MIT Alliance for Research and Technology and by the National Science Foundation.