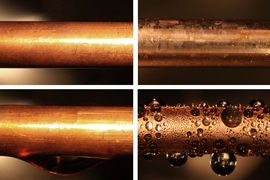 Most of the world’s electricity-producing power plants — whether powered by coal, natural gas, or nuclear fission — make electricity by generating steam that turns a turbine. That steam then is condensed back to water, and the cycle begins again.

But the condensers that collect the steam are quite inefficient, and improving them could make a big difference in overall power plant efficiency.

Now, a team of researchers at MIT has developed a way of coating these condenser surfaces with a layer of graphene, just one atom thick, and found that this can improve the rate of heat transfer by a factor of four — and potentially even more than that, with further work. And unlike polymer coatings, the graphene coatings have proven to be highly durable in laboratory tests.

The findings are reported in the journal Nano Letters by MIT graduate student Daniel Preston, professors Evelyn Wang and Jing Kong, and two others. The improvement in condenser heat transfer, which is just one step in the power-production cycle, could lead to an overall improvement in power plant efficiency of 2 to 3 percent based on figures from the Electric Power Research Institute, Preston says — enough to make a significant dent in global carbon emissions, since such plants represent the vast majority of the world’s electricity generation. “That translates into millions of dollars per power plant per year,” he explains.

There are two basic ways in which the condensers — which may take the form of coiled metal tubes, often made of copper — interact with the flow of steam. In some cases, the steam condenses to form a thin sheet of water that coats the surface; in others it forms water droplets that are pulled from the surface by gravity.

When the steam forms a film, Preston explains, that impedes heat transfer — and thus reduces the efficiency — of condensation. So the goal of much research has been to enhance droplet formation on these surfaces by making them water-repelling.

Often this has been accomplished using polymer coatings, but these tend to degrade rapidly in the high heat and humidity of a power plant. And when the coatings are made thicker to reduce that degradation, the coatings themselves impede heat transfer.

“We thought graphene could be useful,” Preston says, “since we know it is hydrophobic by nature.” So he and his colleagues decided to test both graphene’s ability to shed water, and its durability, under typical power plant conditions — an environment of pure water vapor at 100 degrees Celsius.

They found that the single-atom-thick coating of graphene did indeed improve heat transfer fourfold compared with surfaces where the condensate forms sheets of water, such as bare metals. Further calculations showed that optimizing temperature differences could boost this improvement to 5 to 7 times. The researchers also showed that after two full weeks under such conditions, there was no measurable degradation in the graphene’s performance.

Because the process used to coat the graphene on the copper surface — called chemical vapor deposition — has been tested extensively, the new method could be ready for testing under real-world conditions “in as little as a year,” Preston says. And the process should be easily scalable to power plant-sized condenser coils.

“This work is extremely significant because, to my knowledge, it is the first report of durable dropwise condensation with a single-layer surface coating,” says Jonathan Boreyko, an assistant professor of biomedical engineering and mechanics at Virginia Tech who has studied condensation on superhydrophobic surface. “These findings are somewhat surprising and very exciting.”

Boreyko, who was not involved in the research, adds that this method, if proven through further testing, “could significantly improve the efficiency of power plants and other systems that utilize condensers.”

The research team also included MIT postdoc Daniela Mafra and former postdoc Nenad Miljkovic, who is now an assistant professor at the University of Illinois at Urbana-Champaign. The work was supported by the Office of Naval Research and the National Science Foundation.