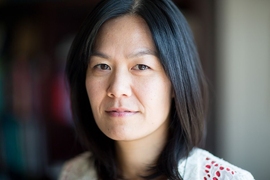 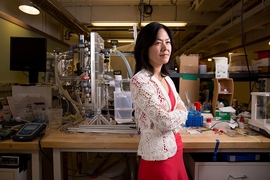 While Evelyn Wang ’00, an associate professor of mechanical engineering, attended MIT as an undergraduate, her connection to the Institute goes back much further than that: This is where her parents met, as graduate students from Taiwan, and married, in the MIT Chapel.

So ending up on the mechanical engineering faculty here at the Institute, where Wang earned tenure this year, felt like “coming full circle,” she says. “Growing up, we always heard a lot about MIT.”

Wang grew up in Santa Monica, Calif., near the campus of the University of California at Los Angeles, where her father, Kang Wang SM ’66, PhD ’70, is still a professor of electrical engineering. “He’s inspired me into academics in many ways,” she says. Her parents “focused a lot on our education, but they also wanted us to be well-rounded,” Wang recalls. “We traveled a lot, and they always felt that we should play music.”

Wang says that her two older brothers were also “role models to me … who always excelled. Music was a way for me to differentiate myself from my brothers, who were really good academically.” (Both of Wang’s brothers also attended MIT, she points out: one for his undergraduate and master’s degrees and the other for his PhD.)

Growing up, the siblings attended a public school with “a strong music program.” Wang took up the piano at age 4, and the violin at 5, and played both instruments through high school, participating in an orchestra that performed widely. “The orchestra was pretty good, and we traveled a lot,” she says. “We performed in Spain and Finland. That helped me develop my identity in some ways.”

Ultimately, Wang ended up pursuing engineering, even though “a lot of people felt I should go into music.” As an undergraduate, she found great pleasure in working on teams to develop engineering projects in her classes. “People think so differently, and being able to work together became such an enjoyable time for me,” she recalls.

“I started taking classes in mechanical engineering, and it really helped me gain my confidence. I loved it,” Wang says. When it came time for graduate school, she was inclined to stay at MIT, but also felt a desire to experience something new, and ended up choosing to attend Stanford University. While there, she says, the experience helped her “figure out how to balance my life with research.” As part of that, she took up a variety of outdoor activities, including cycling, climbing, and hiking.

As a postdoc, she spent a year at Bell Labs, where she began to work with superhydrophobic surfaces — something that has remained a focus of her research ever since. Before her postdoc year was over, Wang had been invited to join the MIT faculty, and decided to accept. “I’m from the West Coast,” she says, “and the only possible way for me to want to go back to the East Coast was if I got [an offer] from MIT.”

Wang’s work has also involved research on photovoltaic systems, solar thermal systems, and nanostructured materials to advance the performance of these systems, she says.

These topics are a natural outgrowth of things she learned by watching and helping her father with projects around the house as she was growing up, Wang says. “He would tutor me,” she says. “He would show us little projects he was working on around the house — measuring voltages, fixing circuits, and so on. … He never imposed it on us, but he exposed us to computers when we were really young, and to old equipment from his lab that he kept in our garage. That definitely builds curiosity.”

Wang describes her mother, Edith Wang PhD ’68, as a “superstar” chemist who completed her doctorate at MIT at 23, and studied under a Nobel laureate at Harvard University before deciding to devote herself to raising her three children. “That’s been her career,” Wang says.

Although Wang has given up her musical performing for now, she swims “a lot” and runs regularly, including occasional competitive races. She enjoys teaching the same classes she took as an undergraduate in mechanical engineering: “It’s great for me to be teaching those classes, and knowing the things they are struggling with,” she says. “I know how difficult it is, and we speak the same language, have the same culture. I understand it because I’ve been through that.”

Wang plans to continue studying heat transfer, with applications in solar energy and solar-thermal systems, and the heating and cooling of buildings, and how those could become more efficient. She’s also doing research on water, including minimizing water use in steam power plants and improving the performance of desalination processes.

Making energy and water systems more efficient, she says, has become a major goal: “We need to do more,” she says. “That’s where the real impact is for the world.”