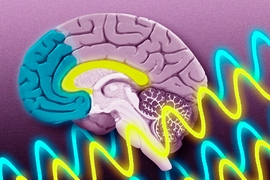 Caption:
Two areas of the brain — the hippocampus (yellow) and the prefrontal cortex (blue) — use two different brain-wave frequencies to communicate as the brain learns to associate unrelated objects.
Credits:
Illustration: Jose-Luis Olivares/MIT

Our brains generate a constant hum of activity: As neurons fire, they produce brain waves that oscillate at different frequencies. Long thought to be merely a byproduct of neuron activity, recent studies suggest that these waves may play a critical role in communication between different parts of the brain.

A new study from MIT neuroscientists adds to that evidence. The researchers found that two brain regions that are key to learning — the hippocampus and the prefrontal cortex — use two different brain-wave frequencies to communicate as the brain learns to associate unrelated objects. Whenever the brain correctly links the objects, the waves oscillate at a higher frequency, called “beta,” and when the guess is incorrect, the waves oscillate at a lower “theta” frequency.

“It’s like you’re playing a computer game and you get a ding when you get it right, and a buzz when you get it wrong. These two areas of the brain are playing two different ‘notes’ for correct guesses and wrong guesses,” says Earl Miller, the Picower Professor of Neuroscience, a member of MIT’s Picower Institute for Learning and Memory, and senior author of a paper describing the findings in the Feb. 23 online edition of Nature Neuroscience.

Furthermore, these oscillations may reinforce the correct guesses while repressing the incorrect guesses, helping the brain learn new information, the researchers say.

Miller and lead author Scott Brincat, a research scientist at the Picower Institute, examined activity in the brain as it forms a type of memory called explicit memory — memory for facts and events. This includes linkages between items such as names and faces, or between a location and an event that took place there.

During the learning task, animals were shown pairs of images and gradually learned, through trial and error, which pairs went together. Each correct response was signaled with a reward.

As the researchers recorded brain waves in the hippocampus and the prefrontal cortex during this task, they noticed that the waves occurred at different frequencies depending on whether the correct or incorrect response was given. When the guess was correct, the waves occurred in the beta frequency, about 9 to 16 hertz (cycles per second). When incorrect, the waves oscillated in the theta frequency, about 2 to 6 hertz.

Miller believes the same thing is happening during this learning task.

“When the animal guesses correctly, the brain hums at the correct answer note, and that frequency reinforces the strengthening of connections,” he says. “When the animal guesses incorrectly, the ‘wrong’ buzzer buzzes, and that frequency is what weakens connections, so it’s basically telling the brain to forget about what it just did.”

The findings represent a major step in revealing how memories are formed, says Howard Eichenbaum, director of the Center for Memory and Brain at Boston University.

“This study offers a very specific, detailed story about the role of different directions of flow, who’s sending information to whom, at what frequencies, and how that feedback contributes to memory formation,” says Eichenbaum, who was not part of the research team.

The study also highlights the significance of brain waves in cognitive function, which has only recently been discovered by Miller and others.

“Brain waves had been ignored for decades in neuroscience. It’s been thought of as the humming of a car engine,” Miller says. “What we’re discovering through this experiment and others is that these brain waves may be the infrastructure that supports neural communication.”

The researchers are now investigating whether they can speed up learning by delivering noninvasive electrical stimulation that oscillates at beta frequencies when the correct answer is given and at theta frequencies when the incorrect answer is given. “The idea is that you make the correct guesses feel more correct to the brain, and the incorrect guesses feel more incorrect,” Miller says.

This form of very low voltage electrical stimulation has already been approved for use in humans.

“This is a technique that people have used in humans, so if it works, it could potentially have clinical relevance for enhancing memory or treating neurological disorders,” Brincat says.

The research was funded by the National Institute of Mental Health and the Picower Foundation.

How the brain assigns objects to categories