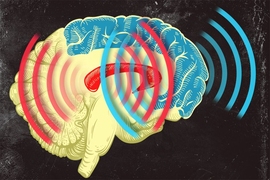 The human mind can rapidly absorb and analyze new information as it flits from thought to thought. These quickly changing brain states may be encoded by synchronization of brain waves across different brain regions, according to a new study from MIT neuroscientists.

The researchers found that as monkeys learn to categorize different patterns of dots, two brain areas involved in learning — the prefrontal cortex and the striatum — synchronize their brain waves to form new communication circuits.

“We’re seeing direct evidence for the interactions between these two systems during learning, which hasn’t been seen before. Category-learning results in new functional circuits between these two areas, and these functional circuits are rhythm-based, which is key because that’s a relatively new concept in systems neuroscience,” says Earl Miller, the Picower Professor of Neuroscience at MIT and senior author of the study, which appears in the June 12 issue of Neuron.

There are millions of neurons in the brain, each producing its own electrical signals. These combined signals generate oscillations known as brain waves, which can be measured by electroencephalography (EEG). The research team focused on EEG patterns from the prefrontal cortex —the seat of the brain’s executive control system — and the striatum, which controls habit formation.

The phenomenon of brain-wave synchronization likely precedes the changes in synapses, or connections between neurons, believed to underlie learning and long-term memory formation, Miller says. That process, known as synaptic plasticity, is too time-consuming to account for the human mind’s flexibility, he believes.

“If you can change your thoughts from moment to moment, you can’t be doing it by constantly making new connections and breaking them apart in your brain. Plasticity doesn’t happen on that kind of time scale,” says Miller, who is a member of MIT’s Picower Institute for Learning and Memory. “There’s got to be some way of dynamically establishing circuits to correspond to the thoughts we’re having in this moment, and then if we change our minds a moment later, those circuits break apart somehow. We think synchronized brain waves may be the way the brain does it.”

The paper’s lead author is former Picower Institute postdoc Evan Antzoulatos, who is now at the University of California at Davis.

In the new study, the researchers wanted to investigate whether this activity pattern actually reflects communication between the prefrontal cortex and striatum, or if each region is working independently. To do this, they measured EEG signals as monkeys learned to assign patterns of dots into one of two categories.

By the end of the experiment, when the researchers were showing 256 novel exemplars, the monkeys were able to categorize all of them correctly.

As the monkeys shifted from rote memorization to learning the categories, the researchers saw a corresponding shift in EEG patterns. Brain waves known as “beta bands,” produced independently by the prefrontal cortex and the striatum, began to synchronize with each other. This suggests that a communication circuit is forming between the two regions, Miller says.

“There is some unknown mechanism that allows these resonance patterns to form, and these circuits start humming together,” he says. “That humming may then foster subsequent long-term plasticity changes in the brain, so real anatomical circuits can form. But the first thing that happens is they start humming together.”

A little later, as an animal nailed down the two categories, two separate circuits formed between the striatum and prefrontal cortex, each corresponding to one of the categories.

“This is the first paper that provides data suggesting that coupling in the beta-band between prefrontal cortex and striatum may play a key role in category-formation. In addition to revealing a novel mechanism involved in category-learning, the results also contribute to better understanding of the significance of coupled beta-band oscillations in the brain,” says Andreas Engel, a professor of physiology at the University Medical Center Hamburg-Eppendorf in Germany.

Previous studies have shown that during cognitively demanding tasks, there is increased synchrony between the frontal cortex and visual cortex, but Miller’s lab is the first to show specific patterns of synchrony linked to specific thoughts.

Miller and Antzoulatos also showed that once the prefrontal cortex learns the categories and sends them to the striatum, they undergo further modification as new information comes in, allowing more expansive learning to take place. This iteration can occur over and over.

“That’s how you get the open-ended nature of human thought. You keep expanding your knowledge,” Miller says. “The prefrontal cortex learning the categories isn’t the end of the game. The cortex is learning these new categories and then forming circuits that can send the categories down to the striatum as if it’s just brand-new material for the brain to elaborate on.”

In follow-up studies, the researchers are now looking at how the brain learns more abstract categories, and how activity in the striatum and prefrontal cortex might reflect that type of abstraction.

The research was funded by the National Institute of Mental Health.

Lauren Hitchings reports for New Scientist on findings from Professor Earl Miller that show how the the synchronization of brain waves across different regions of the brain may explain our brain’s ability to rapidly process and interpret information.

Multitasking is no problem for these brain cells