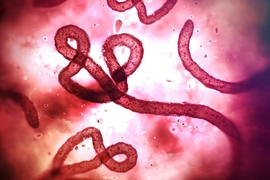 Lydia Bourouiba, the Esther and Harold E. Edgerton Career Development Assistant Professor in MIT’s Department of Civil and Environmental Engineering, garnered media attention last year for her research showing that aerosol particles produced by sneezing and coughing could spread much farther than had been realized — a finding with potentially important ramifications for understanding the spread of diseases such as the flu. MIT News asked Bourouiba what might be learned from that research that could relate to controlling the ongoing outbreak of Ebola in West Africa.

Q. From what you have learned about the way fluid droplets can disperse through sneezing and coughing, are there lessons on possible protective measures that could be taken to curb the spread of the Ebola virus?

A. The research in my group focuses on … transmission processes that involve the interaction between fluids and pathogens. These could be outside the hosts, such as in contaminated water, or inside the hosts, such as in contaminated salivary fluids. The research we carried out on respiratory disease transmission, focusing on the fluid dynamics of violent exhalations — sneezes and coughs — clearly showed two things.

First, there is a continuum of modes of transmission. This is in contrast to the previously held notions that transmission only occurs through two modes: large or small droplets. It is important to incorporate such a notion of continuum into the models of infectious transmission and the risk-assessment tools used to recommend intervention strategies.

Second, an understanding of the fluid dynamics of the transmission process is critical to avoid underestimating the range of pathogen deposition, and the duration of suspension in the air. For example, we showed that failing to incorporate the multiphase turbulent cloud dynamics, featuring contaminated droplets of a wide range of sizes, leads to dramatically underestimating the range of transmission around an infected host.

Q. Given that the Ebola virus is not thought to be transmissible through aerosols, are there other aspects of its transmission that you think need further research, or are there things that could be done to help contain it that are not already being done?

A. It is very important to revisit the current knowledge of a range of infectious diseases, including Ebola. Research on the fundamental physical processes governing infectious disease transmission dates back to the 1930s for most diseases, and the ’70s for some specific experiments involving Ebola. Very little fundamental mechanistic research has been done since then to support the current claims and recommendations about transmission routes.

Q. More broadly, are there significant gaps in our knowledge of disease transmission in general that require more research?

A. Debates continue on the dominant routes of transmission, even for infectious diseases such as influenza, tuberculosis, SARS, and now Ebola. Pathogens that can be found in sputum or mucosalivary fluids, which is the case with Ebola, can easily end up in the droplets emitted during violent exhalations, such as coughing and sneezing.

Very little is understood on how many pathogens such droplets may contain. What sets such amounts? How does the physics of formation, dispersion, and evaporation of such droplets … change the fate of the pathogens they contain, and thereby increase or decrease their survival, and the likelihood of disease transmission?

Emerging and re-emerging infectious diseases will continue to be a major part of our life in the coming century. It is important to fundamentally revisit our understanding of disease transmission from one host to the next, particularly in light of our findings on a continuum of modes of transmission and the critical importance of incorporating fundamental physical processes, such as fluid dynamics processes, on the modeling of such mechanisms.

Launching a vital link in the Ebola-response effort

How to predict responses to disease