The next time you feel a sneeze coming on, raise your elbow to cover up that multiphase turbulent buoyant cloud you’re about to expel.

That’s right: A novel study by MIT researchers shows that coughs and sneezes have associated gas clouds that keep their potentially infectious droplets aloft over much greater distances than previously realized.

“When you cough or sneeze, you see the droplets, or feel them if someone sneezes on you,” says John Bush, a professor of applied mathematics at MIT, and co-author of a new paper on the subject. “But you don’t see the cloud, the invisible gas phase. The influence of this gas cloud is to extend the range of the individual droplets, particularly the small ones.”

Indeed, the study finds, the smaller droplets that emerge in a cough or sneeze may travel five to 200 times further than they would if those droplets simply moved as groups of unconnected particles — which is what previous estimates had assumed. The tendency of these droplets to stay airborne, resuspended by gas clouds, means that ventilation systems may be more prone to transmitting potentially infectious particles than had been suspected.

With this in mind, architects and engineers may want to re-examine the design of workplaces and hospitals, or air circulation on airplanes, to reduce the chances of airborne pathogens being transmitted among people.

“You can have ventilation contamination in a much more direct way than we would have expected originally,” says Lydia Bourouiba, an assistant professor in MIT’s Department of Civil and Environmental Engineering, and another co-author of the study.

The paper, “Violent expiratory events: on coughing and sneezing,” was published in the Journal of Fluid Mechanics. It is co-written by Bourouiba, Bush, and Eline Dehandschoewercker, a graduate student at ESPCI ParisTech, a French technical university, who previously was a visiting summer student at MIT, supported by the MIT-France program.

The researchers used high-speed imaging of coughs and sneezes, as well as laboratory simulations and mathematical modeling, to produce a new analysis of coughs and sneezes from a fluid-mechanics perspective. Their conclusions upend some prior thinking on the subject. For instance: Researchers had previously assumed that larger mucus droplets fly farther than smaller ones, because they have more momentum, classically defined as mass times velocity.

That would be true if the trajectory of each droplet were unconnected to those around it. But close observations show this is not the case; the interactions of the droplets with the gas cloud make all the difference in their trajectories. Indeed, the cough or sneeze resembles, say, a puff emerging from a smokestack.

“If you ignored the presence of the gas cloud, your first guess would be that larger drops go farther than the smaller ones, and travel at most a couple of meters,” Bush says. “But by elucidating the dynamics of the gas cloud, we have shown that there’s a circulation within the cloud — the smaller drops can be swept around and resuspended by the eddies within a cloud, and so settle more slowly. Basically, small drops can be carried a great distance by this gas cloud while the larger drops fall out. So you have a reversal in the dependence of range on size.”

A cough or sneeze is a “multiphase turbulent buoyant cloud,” as the researchers term it in the paper, because the cloud mixes with surrounding air before its payload of liquid droplets falls out, evaporates into solid residues, or both.

“The cloud entrains ambient air into it and continues to grow and mix,” Bourouiba says. “But as the cloud grows, it slows down, and so is less able to suspend the droplets within it. You thus cannot model this as isolated droplets moving ballistically.” 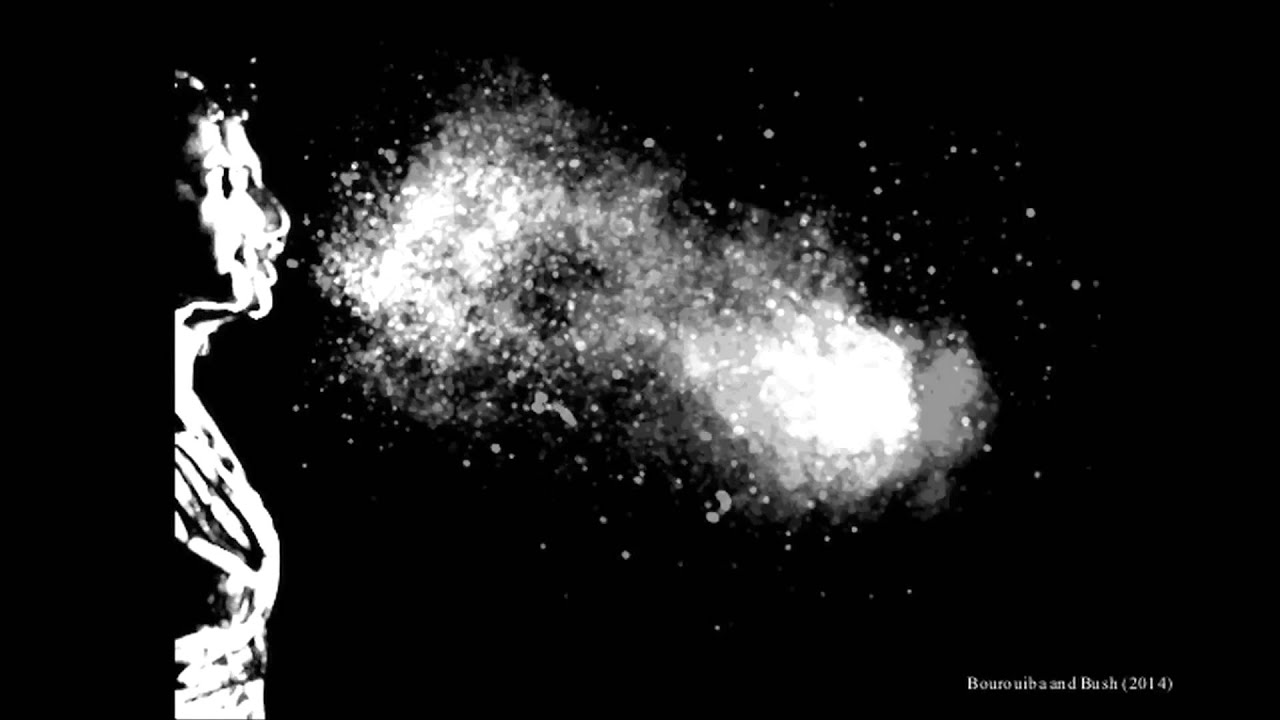 Play video
High-speed imaging has helped MIT researchers determine that some droplets from coughs and sneezes may carry much farther than previous studies had estimated.

Ready for a close-up

Other scholars say the findings are promising. Lidia Morawska, a professor at Queensland University of Technology in Brisbane, Australia, who has read the study, calls it “potentially a very important paper” that suggests people “might have to rethink how we define the airborne respiratory aerosol size range.” However, Morawska also notes that she would still like to see follow-up studies on the topic.

The MIT researchers are now developing additional tools and studies to extend our knowledge of the subject. For instance, given air conditions in any setting, researchers can better estimate the reach of a given expelled pathogen.

“An important feature to characterize is the pathogen footprint,” Bush says. “Where does the pathogen actually go? The answer has changed dramatically as a result of our revised physical picture.”

Bourouiba’s continuing research focuses on the fluid dynamics of fragmentation, or fluid breakup, which governs the formation of the pathogen-bearing droplets responsible for indoor transmission of respiratory and other infectious diseases. Her aim is to better understand the mechanisms underlying the epidemic patterns that occur in populations.

“We’re trying to rationalize the droplet size distribution resulting from the fluid breakup in the respiratory tract and exit of the mouth,” she says. “That requires zooming in close to see precisely how these droplets are formed and ejected.”

Funding for the study was provided by the National Science Foundation.

A Slate video by Paca Thomas features new MIT research that shows particles from coughs and sneezes travel much farther than previously thought.

Washington Post reporter Fred Barbash reports on new MIT research that shows the importance of covering up coughs and sneezes. Researchers found that droplets from coughs and sneezes form a gas cloud that can travel further than previously thought.

“A new study from MIT that could change the way building ventilation systems are designed found that the germs stay airborne in gas clouds, spreading the droplets throughout an entire room,” writes Boston Herald reporter Jordan Graham of the MIT study on coughing and sneezing.

Boston Globe reporter Deborah Kotz highlights research from Professor John Bush and Professor Lydia Bourouiba that shows virus droplets expelled through a cough or sneeze travel five to 200 times farther than they would as individual particles.

“In a new study, published in the Journal of Fluid Mechanics, researchers report that coughs and sneezes have “associated gas clouds that keep their potentially infectious droplets aloft over much greater distances than previously realized”,” writes Boston Magazine reporter Melissa Malamut about a new MIT on how coughs and sneezes spread disease.