How to predict responses to disease 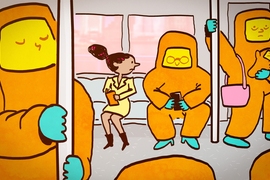 Sometimes the response to the outbreak of a disease can make things worse — such as when people panic and flee, potentially spreading the disease to new areas. The ability to anticipate when such overreactions might occur could help public health officials take steps to limit the dangers.

Now a new computer model could provide a way of making such forecasts, based on a combination of data collected from hospitals, social media, and other sources. The model was developed by researchers at MIT, Draper Laboratory, and Ascel Bio, and is described in a paper published in the journal Interface.

The research grew out of earlier studies of how behavior spreads through social networks, explains co-author Marta Gonzalez, an assistant professor of civil and environmental engineering at MIT. The spread of information — and misinformation — about disease outbreaks “had not been studied, and it’s hard to get detailed information on the panic reactions,” Gonzalez says. “How do you quantify panic?”

One way of analyzing those reactions is by studying news reporting on outbreaks, as well as messages posted on social media, and comparing those with data from hospital records about the actual incidence of the disease.

In many cases, the reaction to an outbreak can cause more harm than the disease itself: For example, the researchers say, curtailing travel and distribution of goods can create economic damage, or even lead to rioting and other behavior that can exacerbates a disease’s spread. Wide publicity of an outbreak can also cause health care facilities to be overrun by people concerned about minor symptoms, potentially making it difficult for those affected by the disease to obtain the care they need, the researchers add.

To study the phenomenon, the team looked at data from three disease outbreaks: the 2009 spread of H1N1 flu in both Mexico and in Hong Kong, and the 2003 spread of SARS in Hong Kong. The model they developed could accurately reproduce the population-level behavior that accompanied those outbreaks.

In these cases, public response was often disproportionate to actual risk; in general, the research showed, diseases that are rare or unusual frequently receive attention that far outpaces the true risk. For example, the SARS outbreak in Hong Kong produced a much stronger public response than H1N1, even though the rate of infection with H1N1 was hundreds of times greater than that of SARS.

This analysis did not specifically address the ongoing Ebola epidemic in West Africa — but once again, Gonzalez says, “The response [is] just not justified by the extent of the disease.” While the present study began long before this latest outbreak, she says, the methods developed to analyze both social and medical data should make it much easier to analyze the response. Gonzalez and her colleagues have begun a follow-up study of the response to Ebola.

“I hope in the future, if we could predict that these bad social and economic consequences are going to happen that might cost a lot of money and might cost a lot of lives, that people can take measures to counteract these effects,” Gonzalez says. While media coverage can sometimes help to spread panic during an outbreak, the right kind of information can potentially have the opposite effect, she says.

Olivia Woolley Meza, a professor of computational social science at ETH in Zurich who was not involved in this research, says, "This paper stands out from others that have so far approached similar questions,” thanks to "clever use of comparative studies to overcome the challenge of data scarcity that has typically thwarted such attempts.”

"With a good understanding of the social response to epidemics, policies that fail to control the spread of disease due to counterproductive but foreseeable social responses can be avoided," she adds. "This transformation in the way we think about and implement disease control is sorely needed to prevent the outbreak of pandemics that threaten millions of lives.”

Atlantic reporter Cari Romm writes about how MIT researchers have developed a new method for predicting public overreaction to disease outbreaks. The researchers “plan to use the model to help policymakers better prepare for disease-induced hysteria,” Romm explains.