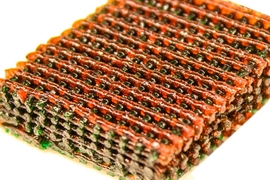 ↓ Download Image
Caption: Photo shows the open lattice of 3-D printed material, with materials having different characteristics of strength and flexibility indicated by different colors.
Credits: Courtesy of the researchers 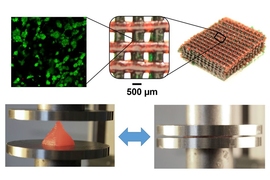 ↓ Download Image
Caption: At top, the structure of the hydrogel material is shown at different scales, down to the molecular level. At bottom, material 3-D printed using this method is so flexible that it can be squeezed flat, and then spring back to its full original shape.
Credits: Courtesy of the researchers

Caption:
Photo shows the open lattice of 3-D printed material, with materials having different characteristics of strength and flexibility indicated by different colors.
Credits:
Courtesy of the researchers

Caption:
At top, the structure of the hydrogel material is shown at different scales, down to the molecular level. At bottom, material 3-D printed using this method is so flexible that it can be squeezed flat, and then spring back to its full original shape.
Credits:
Courtesy of the researchers

Researchers have developed a new way of making tough — but soft and wet — biocompatible materials, called “hydrogels,” into complex and intricately patterned shapes. The process might lead to injectable materials for delivering drugs or cells into the body; scaffolds for regenerating load-bearing tissues; or tough but flexible actuators for future robots, the researchers say.

The new process is described in a paper in the journal Advanced Materials, co-authored by MIT associate professor of mechanical engineering Xuanhe Zhao and colleagues at MIT, Duke University, and Columbia University.

Hydrogels, defined by water molecules encased in rubbery polymer networks that provide shape and structure, are similar to natural tissues such as cartilage, which is used by the body as a natural shock absorber. The new 3-D printing process could eventually make it possible to produce tough hydrogel structures artificially for repair or replacement of load-bearing tissues, such as cartilage.

While synthetic hydrogels are commonly weak or brittle, a number of them that are tough and stretchable have been developed over the last decade. However, previous ways of making tough hydrogels have usually involved “harsh chemical environments” that would kill living cells encapsulated in them, Zhao says.

The new materials are benign enough to synthesize together with living cells — such as stem cells — which could then allow high viability of the cells, says Zhao, who holds a joint appointment in MIT’s Department of Civil and Environmental Engineering.

In addition, the previous work was not able to produce complex 3-D structures with tough hydrogels, Zhao says. The new biocompatible tough hydrogel can be printed into diverse 3-D structures such as a hollow cube, hemisphere, pyramid, twisted bundle, multilayer mesh, or physiologically relevant shapes, such as a human nose or ear.

The new method uses a commercially available 3D-printing mechanism, Zhao explains. “The innovation is really about the material — a new ink for 3-D printing of biocompatible tough hydrogel,” he says — specifically, a composite of two different biopolymers. “Each [material] individually is very weak and brittle, but once you put them together, it becomes very tough and strong. It’s like steel-reinforced concrete.”

One of the two polymers provides elasticity to the printed material, while the other allows it to dissipate energy under deformation without breaking. A third ingredient, a biocompatible “nanoclay,” makes it possible to fine-tune the viscosity of the material, improving the ability to control its flow through the 3D-printing nozzle.

The material can be made so flexible that a printed shape, such as a pyramid, can be compressed by 99 percent, and then spring back to its original shape, Sungmin Hong, a lead author of the paper and a former postdoc in Zhao’s group, says; it can also be stretched to five times its original size. Such resilience is a key feature of natural bodily tissues that need to withstand a variety of forces and impacts.

Such materials might eventually be used to custom-print shapes for the replacement of cartilaginous tissues in ears, noses, or load-bearing joints, Zhao says. Lab tests have already shown that the material is even tougher than natural cartilage.

The next step in the research will be to improve the resolution of the printer, which is currently limited to details about 500 micrometers in size, and to test the printed hydrogel structures in animal models. “We are enhancing the resolution,” Zhao says, “to be able to print more accurate structures for applications.”

In addition to biomedical applications, the same technique could be applied to printing a variety of soft but tough structural materials, he says, such as actuators for soft robotic systems.

“This is really beautiful work that demonstrates major advances in the utilization of tough hydrogels,” says David Mooney, a professor of bioengineering at Harvard University who was not involved in this work. “This builds off earlier work using other polymer systems, with some of this earlier work done by Dr. Zhao, but the demonstration that one can achieve similar mechanical performance with a common biomedical polymer is a substantial advance.”

Mooney adds, “It is also quite exciting that these new tough gels can be used for 3-D printing, as this is new for these gels, to my knowledge.”