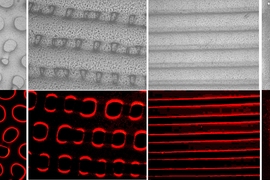 ↓ Download Image
Caption: Images show textures (top) and fluorescent light (bottom) produced by the new synthetic elastomer material that can mimic some of the camouflage abilities of octopuses and other cephalopods.
Credits: Courtesy of the researchers

Caption:
Images show textures (top) and fluorescent light (bottom) produced by the new synthetic elastomer material that can mimic some of the camouflage abilities of octopuses and other cephalopods.
Credits:
Images courtesy of the researchers

Cephalopods, which include octopuses, squid, and cuttlefish, are among nature’s most skillful camouflage artists, able to change both the color and texture of their skin within seconds to blend into their surroundings — a capability that engineers have long struggled to duplicate in synthetic materials. Now a team of researchers has come closer than ever to achieving that goal, creating a flexible material that can change its color or fluorescence and its texture at the same time, on demand, by remote control.

The results of their research have been published in the journal Nature Communications, in a paper by a team led by Xuanhe Zhao, the Brit (1961) and Alex (1949) d'Arbeloff Career Development Associate Professor in Engineering Design, and Duke University Professor of Chemistry Stephen Craig.

Zhao, who joined the MIT faculty from Duke this month and holds a joint appointment with the Department of Civil and Environmental Engineering, says the new material is essentially a layer of electro-active elastomer that could be quite easily adapted to standard manufacturing processes and uses readily available materials. This could make it a more economical dynamic camouflage material than others that are assembled from individually manufactured electronic modules.

While its most immediate applications are likely to be military, Zhao says the same basic approach could eventually lead to production of large, flexible display screens and anti-fouling coatings for ships.

In its initial proof-of-concept demonstrations, the material can be configured to respond with changes in both texture and fluorescence, or texture and color. In addition, while the present version can produce a limited range of colors, there is no reason that the range of the palette cannot be increased, Craig says.

Cephalopods achieve their remarkable color changes using muscles that can alter the shapes of tiny pigment sacs within the skin — for example, contracting to change a barely visible round blob of color into a wide, flattened shape that is clearly seen. “In a relaxed state, it is very small,” Zhao says, but when the muscles contract, “they stretch that ball into a pancake, and use that to change color. The muscle contraction also varies skin textures, for example, from smooth to bumpy.” Octopuses use this mechanism both for camouflage and for signaling, he says, adding, “We got inspired by this idea, from this wonderful creature.”

The new synthetic material is a form of elastomer, a flexible, stretchable polymer. “It changes its fluorescence and texture together, in response to a change in voltage applied to it — essentially, changing at the flip of a switch,” says Qiming Wang, an MIT postdoc and the first author of the paper.

“We harnessed a physical phenomenon that we discovered in 2011, that applying voltage can dynamically change surface textures of elastomers,” Zhao says.

“The texturing and deformation of the elastomer further activates special mechanically responsive molecules embedded in the elastomer, which causes it to fluoresce or change color in response to voltage changes,” Craig adds. “Once you release the voltage, both the elastomer and the molecules return to their relaxed state — like the cephalopod skin with muscles relaxed.”

While troops and vehicles often move from one environment to another, they are presently limited to fixed camouflage patterns that might be effective in one environment but stick out like a sore thumb in another. Using a system like this new elastomer, Zhao suggests, either on uniforms or on vehicles, could allow the camouflage patterns to constantly change in response to the surroundings.

Another important potential application, Zhao says, is for an anti-fouling coating on the hulls of ships, where microbes and creatures such as barnacles can accumulate and significantly degrade the efficiency of the ship’s propulsion. Earlier experiments have shown that even a brief change in the surface texture, from the smooth surface needed for fast movement to a rough, bumpy texture, can quickly remove more than 90 percent of the biological fouling.

Zhenan Bao, a professor of chemical engineering at Stanford University who was not involved in this research, says this is “inspiring work” and a “clever idea.” She adds, “I think the significant part is to combine the ability of mechanochemical response with electrical addressing so that they can induce fluorescence patterns by demand, reversibly.” Bao cautions that the researchers still face one significant challenge: “Currently they can only induce one kind of pattern in each type of material. It will be important to be able to change the patterns.”

In addition to Zhao, Craig, and Wang, the team also included Duke student Gregory Grossweiler. The work was supported by the U.S. Office of Naval Research, the U.S. Army Research Laboratory and Army Research Office, and the National Science Foundation.

“A team from MIT and Duke created flexible polymers that can change color and texture in response to a controlled voltage, essentially allowing them to camouflage an object with the flip of a switch,” reports Jim Festante for Slate. This mimics the ability of cephalopods in nature to rapidly change color.

Professor Xuanhe Zhao has developed a material that mimics the ability of cephalopods such as cuttlefish, squids, and octopuses, to rapidly change color, reports Rachel Feltman for The Washington Post. "It's a fantastic quality, and one unprecedented in human engineering," says Zhao.

A blueprint for reversible wrinkling in composite materials

3 Questions: Hanna Rose Shell on the hidden history of camouflage