Out of the lab, into the world 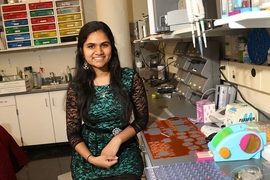 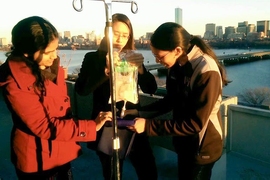 ↓ Download Image
Caption: Gururaj and teammates test a device to warm IV fluid on the balcony of the McCormick Hall penthouse to see how the device performs in colder environments.
Credits: Courtesy of Anisha Gururaj 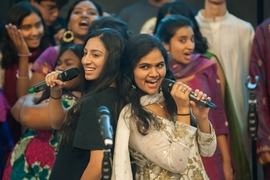 ↓ Download Image
Caption: Gururaj is a member of the a cappella group, the MIT Ohms, which sings mashups of South Asian and Western hits.
Credits: Photo: Staly Chin

Caption:
Gururaj and teammates test a device to warm IV fluid on the balcony of the McCormick Hall penthouse to see how the device performs in colder environments.
Credits:
Courtesy of Anisha Gururaj

Caption:
Gururaj is a member of the a cappella group, the MIT Ohms, which sings mashups of South Asian and Western hits.
Credits:
Photo: Staly Chin

Who says you have to choose one passion?

For MIT senior Anisha Gururaj, each of her varied interests — such as Indian classical dance and music, engineering medical devices, and education — is one piece of a larger puzzle: seeing the world from many different perspectives, and using those insights to make it a better place.

A chemical-biological engineering major, Gururaj has worked on projects ranging from a do-it-yourself diagnostic kit for underserved clinics to a fluid warmer for military trauma victims. She sings with the Ohms, MIT’s South Asian a cappella group, and dances with Natya, MIT’s Indian classical dance group. Last month, Gururaj was among 32 Americans selected as this year’s Rhodes Scholars.

Gururaj was born and raised in St. Louis. Her parents, both of whom work in information technology, immigrated to the U.S. a few years before she was born; over the years, other family members from India joined them. “That was a huge support system; it was like I had eight or nine brothers or sisters and several sets of parents,” she says.

As a child, Gururaj loved music and books. “I would play audiocassettes when I was as young as 2 or 3 and just dance around to music and sing — attempt to sing,” she recalls, laughing. Each night, she says, “I would fight to stay up and read books.”

Her parents began teaching her math and reading at an early age, and encouraged her interest in music. When Gururaj was 5, her mother tracked down an Indian classical music teacher for her; each summer, Gururaj lived with her relatives in India, where she studied music and dance. It opened up her mind in a different way, she says: “The way you think about approaching music or dance just works a different part of you than math and science.”

She loved her high school courses in English and especially in biology and chemistry. But as Gururaj continued on to more advanced science courses and began to explore engineering, she began to notice that she was in a minority. “Girls did not do engineering in my high school,” Gururaj says. “Even in AP Physics, I was one of two girls. And then I took a ‘Principles of Engineering’ class my senior year of high school, and I was the only girl.”

Perhaps the gender imbalance was related to the way engineering was perceived, Gururaj reflects. “It was never really shown how you could create social impact through engineering,” she says.

That changed in Gururaj’s freshman year at MIT, when she took course 1.016 (Design for Complex Environmental Issues). Working in a small team with two other students, she created a switching mechanism for a pedal-powered monorail bike being developed by a New Zealand company called Shweeb, in hopes of encouraging sustainable transportation in cities.

“I’d never had that exposure before, in school, of building things and working with my hands and creating solutions to problems in that way — I didn’t even know how to use a drill,” Gururaj says. “I went from being extremely awkward about it to actually feeling very motivated and rewarded by seeing what I had created.”

“The idea behind this is to allow clinicians at point of care to be able to customize the diagnostic tests that they need,” Gururaj explains. To make customization easier, Gururaj worked on modularizing the kit, breaking it into small pieces that could be swapped out depending on the specific need. She started with Legos — “the epitome of modularized blocks that intuitively fit together” — and eventually landed on a puzzle-piece design using acrylic magnets.

After building a prototype, Gururaj traveled to Chile with the support of a Tau Beta Pi Fellowship. While there, she visited a clinic in a rural village, which she says was limited by its lack of diagnostic resources. “They had no diagnostic capabilities except the capability to do a finger prick for glucose testing,” she says. “All of that has to be sent out. … And anything that needs a quick analysis is just not possible.”

“It really hit home the need for point-of-care diagnostics like the one I was working on,” Gururaj says. “I think collaborating with people who use [the technology] is the most important thing in engineering. And I don’t think it’s actually done often enough.”

When Gururaj began working on MEDIKit Dx, the project had already been underway for some time. She had enjoyed the process of iterating through designs, but she also wondered what it would it be like to design a product from start to finish — first identifying a problem, and then figuring out the best way to solve it.

In the spring of Gururaj’s sophomore year, she took a biochemistry class with Michael Yaffe, the David H. Koch Professor of Biology and Biological Engineering at MIT, who also works as a trauma surgeon. One day, as Gururaj and other students were chatting with Yaffe, the conversation turned to a problem he had seen in clinics: the danger of cold intravenous fluids given to military trauma victims.

“When a person undergoes a traumatic injury, like on the battlefield or in any sort of accident, often what’s given is IV fluid for resuscitation, because you’re at high risk for going into traumatic shock and hypothermia,” Gururaj explains. “If you give cold IV fluid, that actually increases the likelihood of hypothermia and shock.”

But on the battlefield, there’s not always the time or ability to warm the fluid. “What often happens now is that when IV fluid is given, it’s either at outside temperature or they keep it in ice,” Gururaj says. The cold fluid’s effects can sometimes cause even more damage to patients who were already at high risk, she explains.

Mentored by Yaffe, Gururaj and three other students designed and developed a device to warm the IV fluid. “We wanted to go after a cheap, easy, lightweight, disposable solution,” she says. After talking to army medics who might use such a product, the students simplified their prototype to a “warming sleeve” that would fit around the IV fluid bag, cutting the procedure from five steps to one: snap the bag to begin heating.

“We wanted it to start warming within less than five seconds, and it does that. What we’re still working on is maintaining that heat and seeing how long we can maintain that for,” Gururaj says. “Our ultimate goal is to last the amount of time that you would use an IV bag, which is approximately 30 minutes.”

Eventually, Gururaj and her teammates are hoping that what they’ve made will help military medics and their patients. “We’re trying to now work with labs in the military to get a better sense for what it would take for them to actually acquire such a product,” she says.

In her studies next year at Oxford University as a Rhodes Scholar, Gururaj will pursue both sides of her passions: an MSc in engineering science research, with a focus in bioengineering, and a master’s in public policy.

“What I want to do ultimately is work on medical devices. But I think where I really want to be is thinking about how you get a medical device out of a company lab, or out of an academic lab, and into the world,” Gururaj says. “I want to be in a place where I’m drawing from my engineering background to get these crucial technologies into people’s hands.”